MELBOURNE, Australia — It started as a curiosity, believed to be the tallest match in tennis’s Grand Slam history.

And yet by the end of a nearly three-hour slugfest on the Australian Open’s opening day on Monday, fans here came away less impressed by all of the long-limbed height than by the guts of the surprising victor: the virtually unknown Reilly Opelka — 21, American, 7 feet tall in socks — who doled out an eye-popping upset by defeating his ninth-seeded compatriot John Isner, 33, who stands a looming 6-10.

Tennis players in the modern era trend taller than the players of yesteryear, even compared to those of 15 and 20 years ago. But not this much taller. In a sport where the best male players still typically hover around 6 feet (top-ranked Novak Djokovic is listed at 6-2), not only do Isner and Opelka seem like human skyscrapers, they come to the court for each match with the simplest game plan possible: crush serves, slam forehands and hide their considerable deficiencies in movement by keeping every point whiplash short.

Staring across the net at Isner, Opelka said after the match, was like looking in the mirror, and not just because of his opponent’s height.

“There’s just a lot of things that are out of your control,” he said, speaking of the distress that comes from playing one of the few who can hit just as hard, and from such high, imposing angles. “I was expecting that today I probably wouldn’t touch too many balls. I was hoping the same for him.”

Official match statistics back Opelka up. He didn’t touch many balls. The average rally lasted two shots. On only four points were at least nine balls struck. Isner slammed 47 aces. Opelka slammed 40, the last a 141 mile-per-hour fastball that Isner barely moved for. 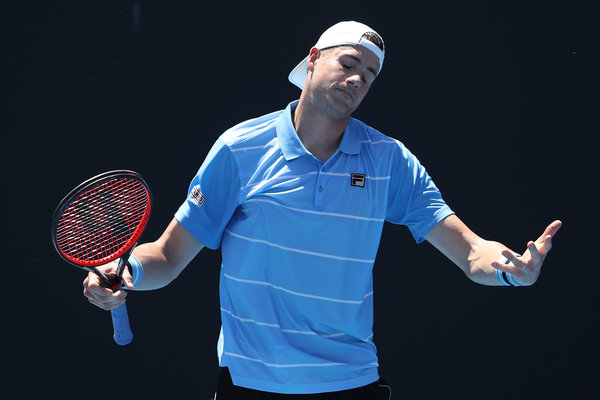 When it was over, Isner could barely hide the disappointment. He rarely made eye contact during the post-match news conference. At times, his hands shook with tension.

He has long been ranked in the top 20 on the ATP Tour. Last season was his best. He won his first World Tour Masters 1000 at the Miami Open, made the semifinals at Wimbledon, and, as one of the top players of the year, appeared in the elite tour finals in London.

But last season also started poorly, punctuated with a loss in some ways similar to the one against Opelka: a first-round defeat at the Australian Open at the hands of a little known, albeit much smaller opponent, Matthew Ebden, an Australian who stands a tour-typical 6-2.

Isner vowed to lean on the fact he began last season in such bad shape — not only being upset in Melbourne but posting an early record of two wins and six losses — before breaking through and winning Miami.

“I was off and running from there,” he said. “Just got to get one under my belt and see what happens.”

Though hardly one for long answers, Opelka appeared relaxed and casual as he spoke in the wake of the most significant victory of his young career. He spoke of the main difference between him and Isner. In the early stages of his career, Opelka, who is listed as 6-11 but has acknowledged he’s even taller, doesn’t have a deeply successful professional past to harken back on.

Hence, even after Monday, his primary motive remains clear: Keep playing well enough to never again have compete in tennis’s often brutal minor leagues, where he won two titles at the end of last season to break into the top 100.

More than making a long run in Melbourne?

Yes, he replied, saying he could only allow himself to think of his next match, against Thomas Fabbiano. The Italian is ranked No. 102 and, compared to Isner, is a relative munchkin.