Real Madrid were left humiliated on their own turf on Tuesday as they lost their three-year grip on the Champions League trophy on an unforgettable night at the Bernabeu. 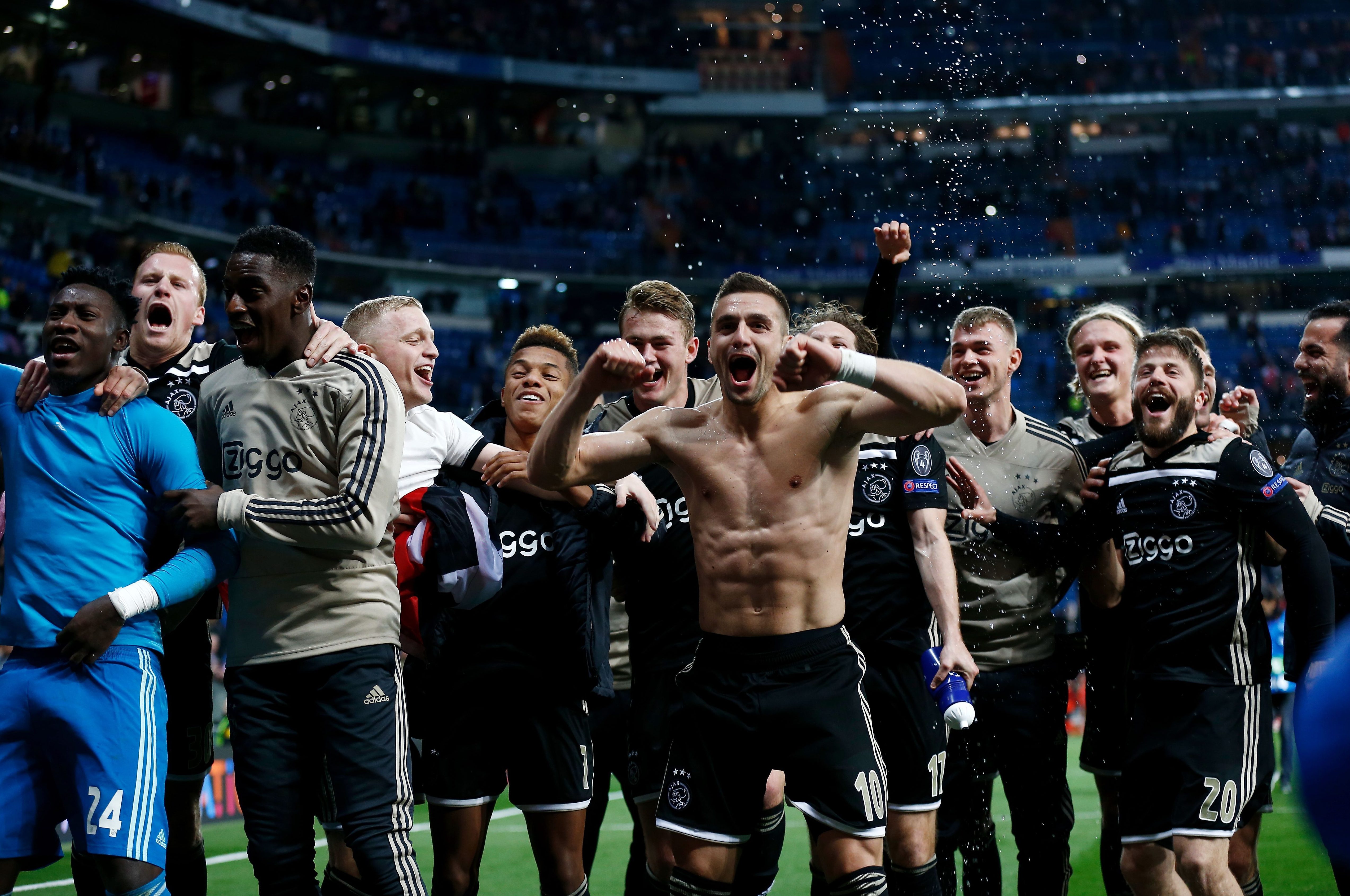 Nobody — particularly not suspended Real skipper Sergio Ramos — gave the Dutch side a prayer of reaching the last eight.

But they raced to a sensational 4-1 victory and SunSport’s MARTIN BLACKBURN looks at how they did it: 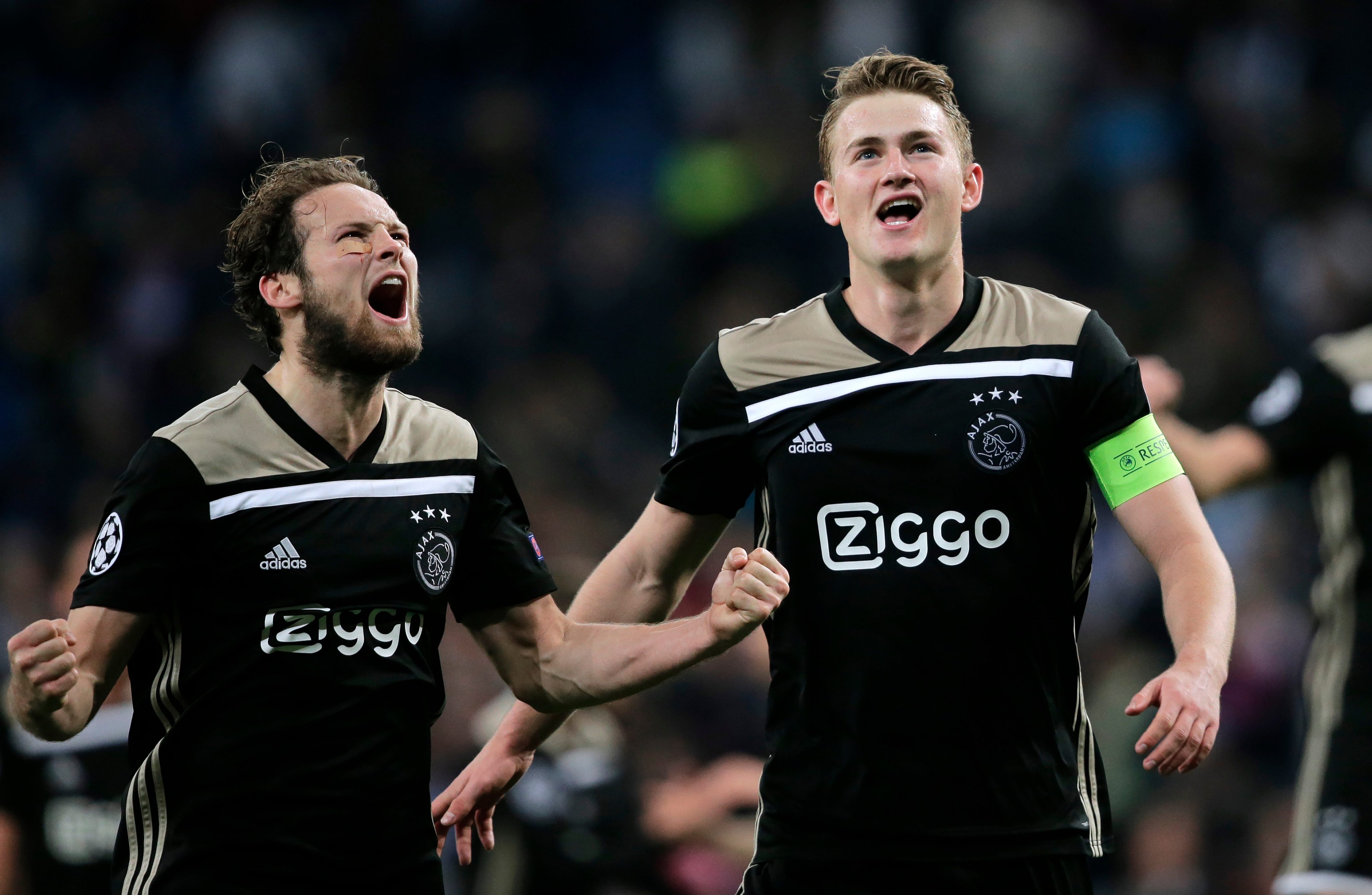 SUPERSTARS IN THE MAKING

According to close pal and current Dutch boss Ronald Koeman, the City boss is “totally wild” about the pair.

Guardiola missed out on De Jong, 21, in January with the midfielder opting to join Barcelona ahead of Manchester City.

It seemed the natural step for a player so highly-regarded that he is often compared to Johann Cruyff.

The way he got the better of Luka Modric in the Bernabeu will only add to the hype.

A host of Prem clubs are queuing up to sign defender De Ligt this summer.

The 19-year-old has already written his name into Ajax folklore, becoming their youngest captain and quickest to make 100 appearances.

It isn’t just those two though — keeper Andre Onana, midfielder Donny van de Beek and goalscorer David Neres are all 22 or under. 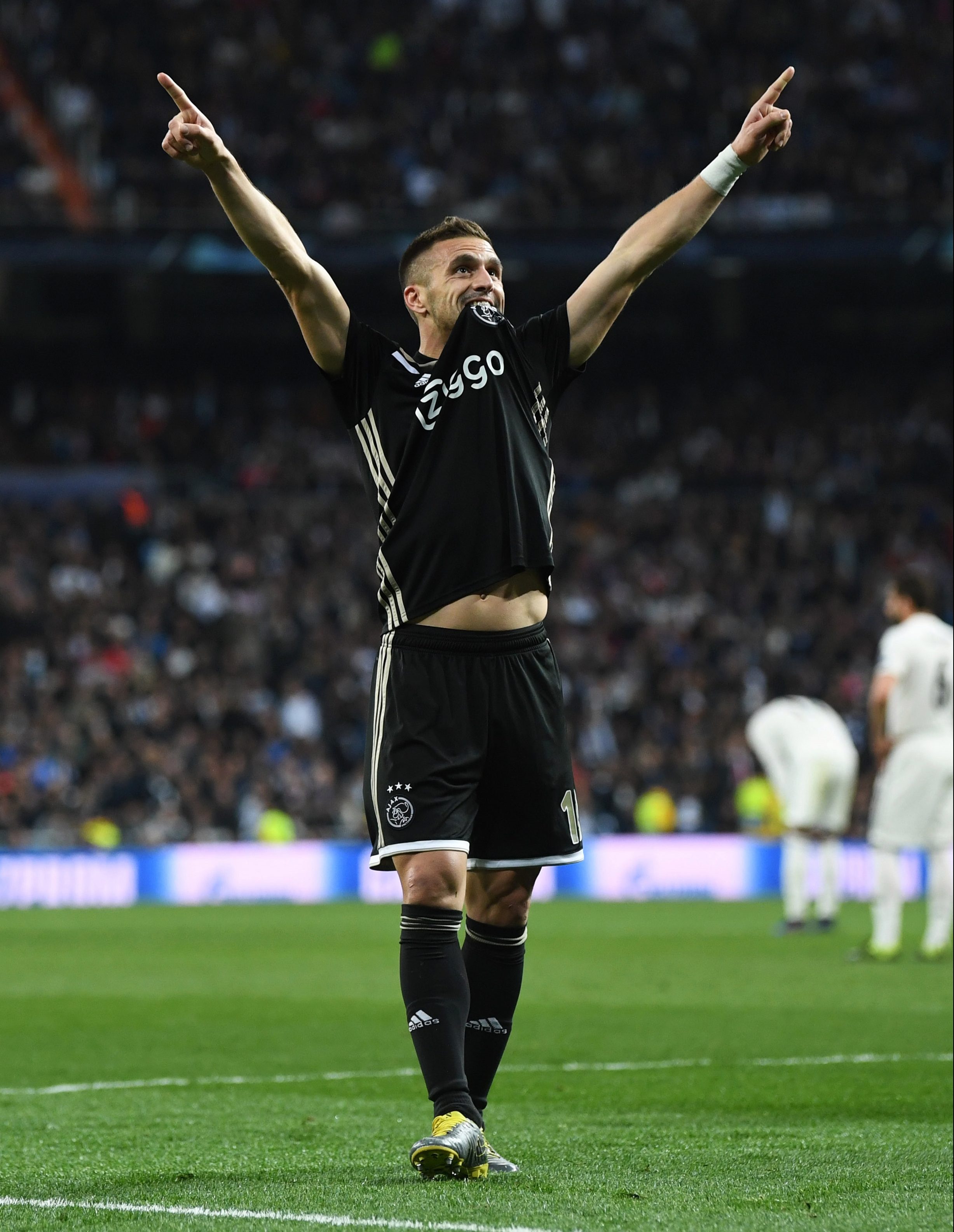 TO go with the future stars, there were some familiar faces from the Premier League.

Dusan Tadic became only the ninth man ever to be awarded a 10 out of 10 by influential French paper L’Equipe for his performance on Tuesday.

The Serbian, 30, was signed by Southampton for £10.9million in 2014 and left four years later for roughly the same fee.

That says much about his career in England — very good at times but not often enough.

His departure in the summer was greeted with a shrug of the shoulders after 24 goals in 162 appearances.

But life in Amsterdam seems to suit him and talking of his stunning show against Real — including an amazing “Maradona turn” before setting up David Neres — he said: “This is probably the best game I’ve ever played. We beat the best club in the world. I’m very proud.”

Four years was the same amount of time that Daley Blind spent in England with Manchester United.

A regular under Louis van Gaal, Jose Mourinho never really rated him and it was no surprise when he returned to first club Ajax for £14m in the summer.

Now 28, he used all his experience to help keep Real’s big-money stars at bay.

ERIK TEN HAG has coached for seven years but it is fair to say it has been low-key until recently.

He started out with Dutch side Go Ahead Eagles then moved to Germany, taking charge of Bayern Munich’s second team while Guardiola was in charge.

He went to Utrecht — helping them qualify for the Europa League — before landing the job at Ajax in 2017.

Ten Hag guided them to second in the Dutch League last season — the same position they currently occupy — five points behind PSV Eindhoven with a game in hand.

The former FC Twente centre-back, 49, is assisted by two legends.

The pair are crucial to Ajax’s model and celebrated on the pitch in front of jubilant travelling fans in Madrid. 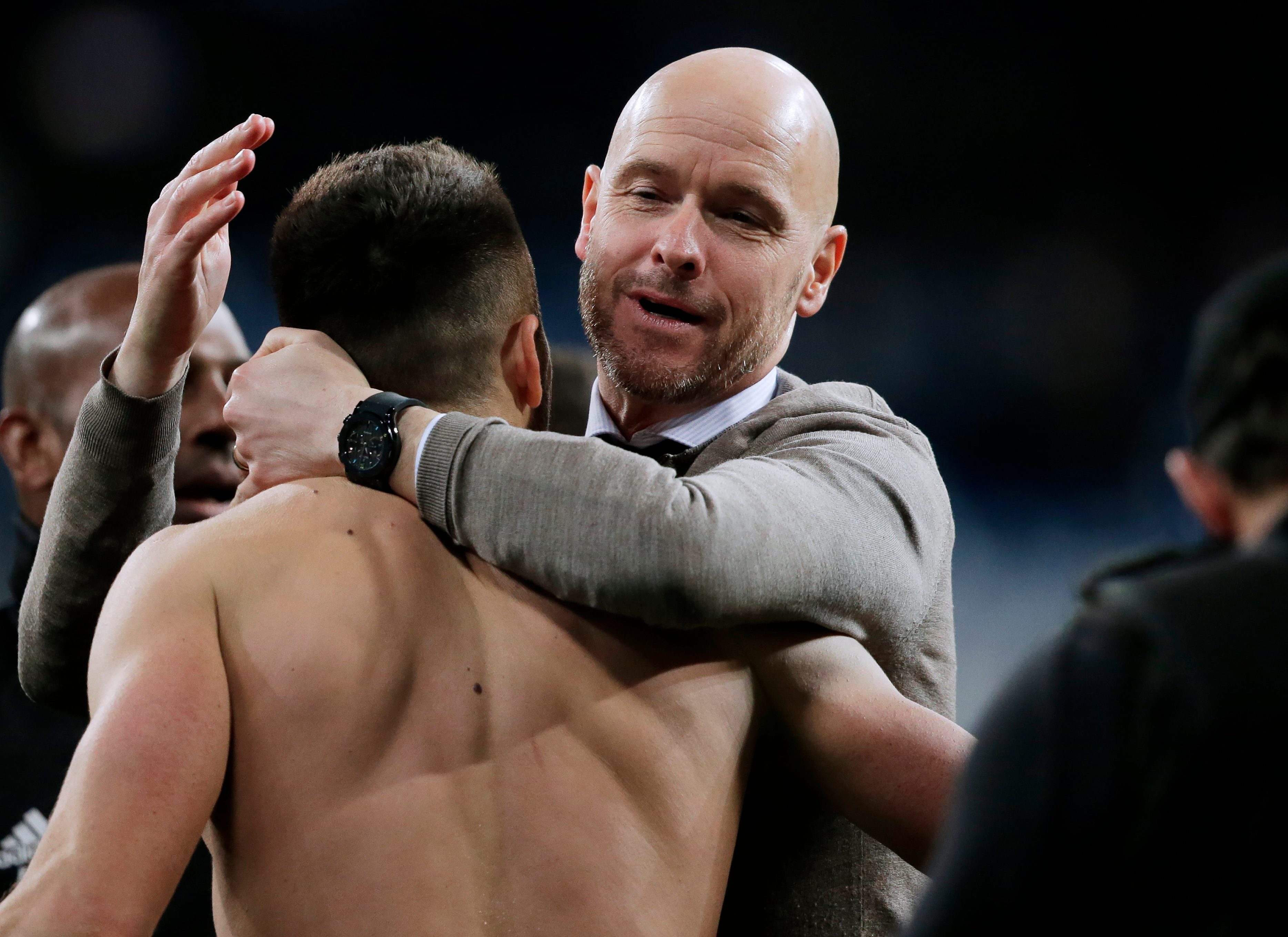 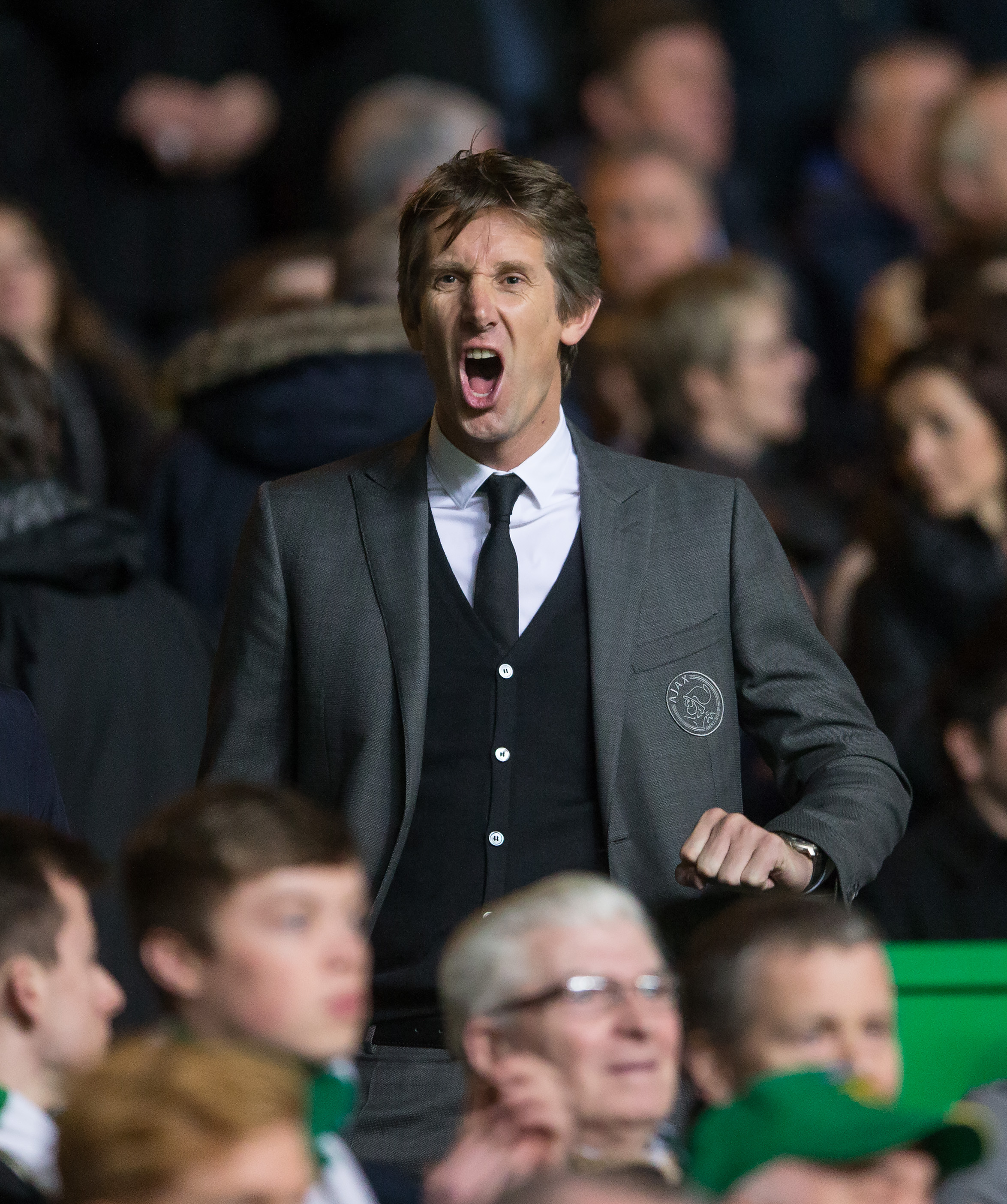 A BIT like Monaco who charged to the semi-final in 2017, Ajax fans need to enjoy this while they can.

We know it will be broken up in the summer with De Jong leaving and De Ligt almost certain to follow.

But nobody at the Amsterdam ArenA will be panicking because there will be more youngsters waiting to take their places. No team in Europe produces more professional players than Ajax.

It was recently reported 86 per cent of the players who are in their famous academy ‘De Toekomst’ at 16 go on to have pro careers.

Ten Hag said: “At 19, they need to be ready for the first team because at 20 they are gone.

“I wish we could keep our players but I know that’s a utopian fantasy.”

But Van der Sar said: “We have to give a path to the next one. If players stay too long, the next one cannot play. The whole thing chokes.”

When wishing De Jong luck in his move to the Nou Camp, Ajax wrote on their website: “Barcelona. Enjoy the future, like we do.”