Russia goalkeeper Igor Akinfeev, who saved two penalties to carry his team past Spain and into the World Cup last eight, has not been practicing spot kicks with his teammates, he said on Tuesday.

The Muscovite twice denied Spain from the spot on Sunday, including kicking away Iago Aspas's final shot to help his team win the shootout 4-3 following a 1-1 draw on Sunday. 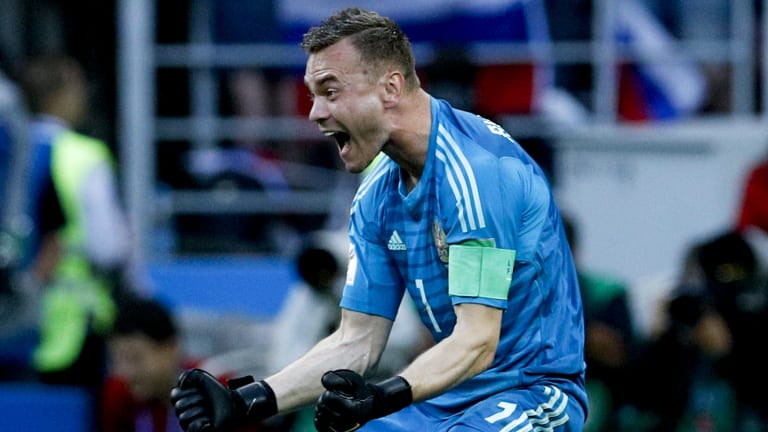 “We want to write new history now. We will try and fight”: Igor Akinfeev.

"We definitely have not trained in it (penalties)," he told reporters at their base on the outskirts of Moscow. Akinfeev said the team had hoped to beat Spain in regular time and not have to go to penalties.

"But the game was long and all the emotions were gone in those 120 minutes," he said.

The Russians, whose win triggered wild celebrations around the country, next face Croatia in the last eight, and Akinfeev said the euphoria would now need to subside.

"Let's all put it all aside, please, and concentrate on the next game," he said. "The team created a holiday that evening. But it is already history, and we want to write new history now. We will try and fight."

"This tournament shows that we are sincere in what we are doing, and that is why it is going so well so far."

Russia's win over the 2010 world champions has boosted the confidence of what was the lowest-ranked team going into the tournament, and has whetted the hosts' appetite for more success.

It is the first time in the post-Soviet era that Russia have reached a World Cup quarter-final.

"It is no secret that each victory adds to confidence," midfielder Yuri Gazinsky told reporters. "Especially victory over Spain. I think that the country believed in us and maybe many had doubts ahead of the match with Spain."

"But I hope we have proved that they can believe in us and we do represent the country. So we will do everything possible to go further. We created a small miracle for the country."

Russia take on the Croats, who also went to penalties as they eliminated Denmark, in Sochi's Fisht Stadium on Saturday evening.