BIRMINGHAM, Ala. — If the businessmen had taken an unimpassioned look at the financial fundamentals of the football program at the University of Alabama-Birmingham on a late May day in 2015, they would have left it in the dustbin.

Six months earlier, the president of the university, Dr. Ray Watts, had shut down the debt-ridden program. Now, 25 of the region’s business moguls were gathered on the 14th floor of the university’s administration building with Watts. They did what they were not expected to do, pledging $5.2 million to help bring back the program.

“It was not a U.A.B. thing, it was a Birmingham thing,” said Hatton Smith, a Birmingham native and one of the businessmen in the room.

Now look at U.A.B. football, and Birmingham. In an era when there are routine calls to dismantle expensive, money-losing college football programs and high school students are shying from the game over concerns about safety, the U.A.B. story is the ultimate unicorn. It fits no larger trend, other than football remaining very popular in the South. Still, it is entirely possible this would not have happened at any other university with U.A.B.’s fact pattern. 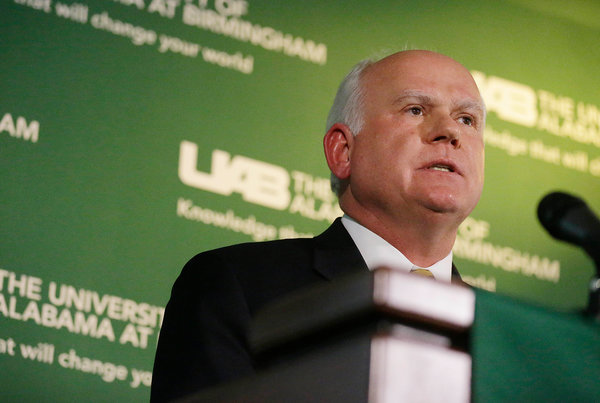 The Blazers returned to action in 2017, going 8-5 and losing to Ohio University in the Bahamas Bowl. They are 10-3 this season, winning Conference USA, and will play Northern Illinois in the Boca Raton Bowl on Tuesday. The Blazers’ coach, Bill Clark, has been offered a five-year contract that will make him the conference’s highest paid coach. There were 1,400 season-ticket holders when the program folded. There are now 14,000.

Where game day around U.A.B. football in 2014 could be humdrum, the scene around Legion Field in 2018 is a sea of green and gold tents for euphoric tailgaters and food trucks galore scattered among revelers. Judges patrol the tailgate area to award prizes for decorations. Players walk through the backslapping throng on their way into the stadium on Blazer Walk.

Many of the business leaders in the May 2015 meeting also donated to build a state-of-the-art $22.5 million football headquarters and practice facility. The momentum spurred a joint venture of the university, the City of Birmingham, Jefferson County and the state’s legislature to build a $174 million, 45,000-seat stadium, which is expected to be ready for the 2021 season. It will replace 91-year-old Legion Field.

David Ridpath, a sports management associate professor at Ohio who studies college athletics, has wondered since 2015 if Watts made a calculated gamble and won big because of the business community and Birmingham’s pride.

“Sometimes saying you are going to drop a sport is the best marketing tool that you have, the scorched-earth strategy,” Ridpath said. “If Watts didn’t plan this, it sure as heck turned out to be a pretty happy accident for people who wanted to save the program. Now they have much more than they would have had before if they had just kept the program.”

Given the upside-down story of U.A.B., it figures that the Blazers led Conference USA in scoring defense (17.3 points a game) yet did not have a player named to the league’s first-team defense. The sophomore running back Spencer Brown was a star with 1,149 yards rushing, but many accept that the real star is Clark, the Eddie Robinson National Coach of the Year. He was the coach when the program folded in 2014, and he revived it by furiously recruiting junior college players for immediate help.

Smith said many saw the shuttering of U.A.B. football as another failure for Birmingham. The city has scrubbed at the permanent stain left by menacing police dogs and fire hoses turned on civil rights protesters in the 1960s and the bombing of the 16th Street Baptist Church in 1963, which killed four girls. Birmingham, once on par with Nashville and Atlanta, fell far behind its rivals in size and economic development.

“The city has had a crisis of self-confidence, so the loss of U.A.B. football added to that,” said Smith, 68. “We had a failed football program in the heartland of football fever. It was a total slap in the face of Birmingham. We can do better than run a white flag up.”

Birmingham certainly has problems that a college football program cannot fix. The poverty rate is 28.1 percent compared with 12.3 over all in the United States, according to 2017 Census Bureau data. A 2017 school board candidate’s website deplored the statistic that just 8.2 percent of the city’s eighth graders were proficient in reading and math.

Watts made it clear in the months after his decision that if sufficient money was raised, he would consider restoring the program, which began in 1991 as part of N.C.A.A. Division III. Watts said he heard the doubts about the validity of a report he used as evidence to shut down the program, so he commissioned a second report, which he said cost U.A.B. about $75,000.

“It essentially said the same thing,” Watts said in defending his initial decision.

Still, Watts left the door open, and the community barged through.

In the first five months of 2015, there was a groundswell of support from alumni and businesses that raised $12 million. That included 84 percent of the 18,000-undergraduate student body voting to raise student fees by $25 a semester.

It was not enough, Watts said.

Then came the meeting on May 27 and the additional $5.2 million pledged from the business leaders. The accumulated $17.2 million wiped away what Watts said was the athletic department’s operational debt to the university. It put pressure on Watts to restore the football program, which he did June 1, just ahead of a Conference USA deadline that requires its Division I members to have football.

Watts said the administration was still the biggest funder of athletics. It provides a $20 million subsidy for an athletics budget of about $30 million. Watts, who graduated from the university in 1976 with an engineering degree, oversees a $1.2 billion campus budget, $3 billion when the U.A.B. health system is included, but he is still not willing to allow football to skate free of debt.

The sardonic view is the football fanatics got their team back and the party lights are back on. But in the May 2015 fund-raising meeting, Mike Goodrich, Sr., founder of an engineering and construction company, hushed an animated debate when he stood and said: “You know I’m not a sports fan. I don’t think I’ve been to a U.A.B. football game, but I’ve seen what this has done to our community. I’m in for a million.”

Many of the millionaires in the meeting with Watts did not attend U.A.B. They were graduates of Auburn, Alabama, Trinity, Birmingham-Southern, Washington & Lee, among others.

Ingram played football at the University of Tennessee, where old money, he said, helps makes sure the Vols want for nothing. U.A.B. is just 50 years old, he said, and it does not yet have the legacy families to write checks in times of need.

The Birmingham executives decided to try to fill the need. Jimmy Filler, who made his fortune in recycling and attended Samford University in Birmingham, donated $1 million to the new football operations center.

Ingram is overseeing a renaissance of U.A.B. athletics on the west side of downtown, which includes a new beach volleyball facility and track, an expanded soccer facility and new women’s basketball locker rooms. He said the athletics department had raised $60 million since June 1, 2015.

For Randall Woodfin, the mayor of Birmingham, the story of U.A.B. football is one of redemption — on the football field and off. “What you are seeing in our city is a resurgence,” he said.