This time last year, Alex Brosque had his mind set on retiring at the end of the 2017-18 season.

It took a persuasive discussion new Sydney FC coach Steve Corica to sway the Sky Blues' captain into playing on for one more year as the club underwent a period of transition.

Having avoided the worst of the expected turbulence that came with that, Brosque could play on beyond this season. 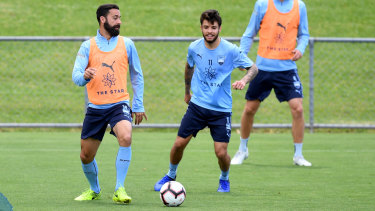 The 35-year-old forward will delay making a decision on his career until the end of the season but says he is more positive about playing on than he was this time last year.

With the arrival of Iran striker Reza Ghoochannejhad, the form of English marksman Adam Le Fondre and the emergence of youngster Luke Ivanovic, Brosque is happy to have an impact role off the bench role at the club. While most players would protest at not starting, Brosque believes it could prolong his career.

"Last year I was probably a lot more leaning towards retiring at this stage than this year," Brosque said. "With my minutes probably starting to change from now on in I think it'll keep me fresh, enjoying playing and mentally in a lot better state as well than last year. We'll see."

Already, Brosque has scored more goals this season than he did last year despite starting just over half as many games. Corica is understood to be eager to have his captain continue for another season but Brosque won't enter talks over a contract renewal with the club until the end of May.

"With Stevie, he's sort of allowed me to see out the season and see how I feel and how I go. I have to respect the fact they have to move on based on my decision as well in terms of planning for next year. I'd say probably closer to the end of the season after the Champions League I'll make some sort of decision," Brosque said.

The forward is working his way back from a foot injury and is set to feature as a substitute against Central Coast Mariners on Sunday afternoon at Leichhardt Oval. Corica is set to start Ghoochannejhad and Le Fondre up front in a partnership that will need to blossom soon if the Sky Blues are to get their faint premiership hopes back on track.

"That was the plan for me from the beginning then when Trent's injury came about it meant I had to play a lot more," Brosque said. "What it means is we've got more depth there which gives Stevie more options. We've got Mitch [Austin] up front as well, and in the number 10 positions we've got so many players – [Milos] Ninkovic, [Anthony] Caceres, [Paulo] Retre, [Danny] De Silva. It just gives Stevie headaches which is a good thing.

"Everyone's pushing everyone, and I don't think we've had in the last few years that competition for places up front. What it means is we've got a lot games coming up with the Champions League as well so I think those numbers we need to have if we're serious about contending in both."

Marquee Siem de Jong is no certainty to feature against the Mariners at Leichhardt as he continues his comeback from the knee injury he suffered against Wellington Phoenix. The former Netherlands international spent much of Thursday's training session away from the rest of the squad, working with physios.