World Rugby is under pressure to crack down on dangerous play at the ruck after David Pocock was again the target of a neck roll at Eden Park on Saturday night.

The Wallabies flanker will have scans on his neck in Canberra this week after being ruthlessly targeted at the breakdown during Australia’s 40-12 loss to New Zealand in Auckland on Saturday. 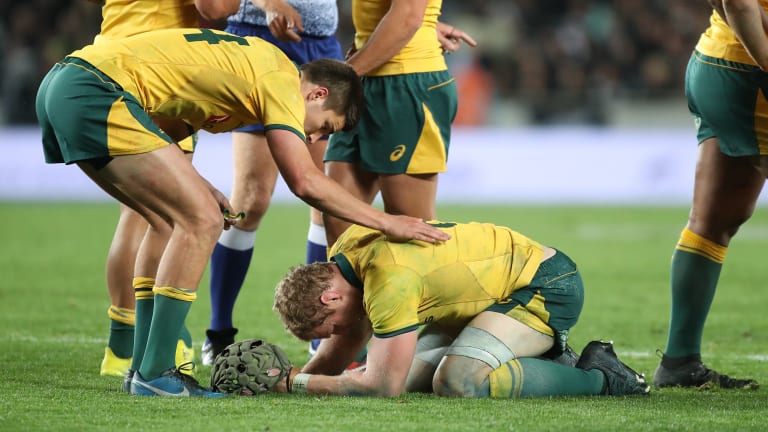 Targeted: David Pocock doubles over after the Wallabies’ heavy defeat by the All Blacks.

Pocock was left holding his neck three times in the first half, at least one of those times after All Blacks centurion Owen Franks grabbed him by the neck and rolled him out of the ruck.

The incident was not picked up by referee Wayne Barnes or the television match official.

He was targeted in the same way numerous times during the Brumbies’ Super Rugby season and at least once during the Ireland Test series in June. He revealed the Brumbies had unsuccessfully asked SANZAAR to consider citing the incidents.

“None were accepted as meeting the threshold,” Pocock said. “It’s a hard one. The refs are doing their best. I thought Wayne was good tonight. He’s a really good communicator, lets both teams know what he’s thinking and you’re able to chat to him. I’ve got a lot of respect for him."

World Rugby rules dictate a yellow card must be issued for contact “to grabbing and rolling/twisting around the head/neck area, even if the contact starts below the line of the shoulders”.

He’s a target and [teams] do whatever they can to get rid of him … he can hardly move his neck today.

Pocock’s influence has meant teams construct specific tactics to negate his presence around the ruck. He won a couple of turnovers at Eden Park but was under serious pressure.

“He’s there nearly all the time and he’s a target and they do whatever they can to get rid of him,” Wallabies coach Michael Cheika said. “Today’s probably not the day to start going out for that type of stuff (raising it as an issue) but he can hardly move his neck today. We need to also go there and give him a bit of support when that happens to him. We’ve got to show him we’re right behind him there.”

New Zealand captain Kieran Read said the All Blacks made sure they got over the gain line with their carries then worked hard to shut him out of the contest.

“We did win more of the gain line through our strike and running on to the ball. As soon as our ball carriers were a bit more effective, it allowed us to go forward and get some quick ball,” Read said. “He [Pocock] is a world-class player, he probably won a couple of turnovers as well, but overall I felt that you’ve got to work hard to get rid of him and the sooner you can do it the easier it is, because once he’s in a great position it’s nigh on impossible to move him." 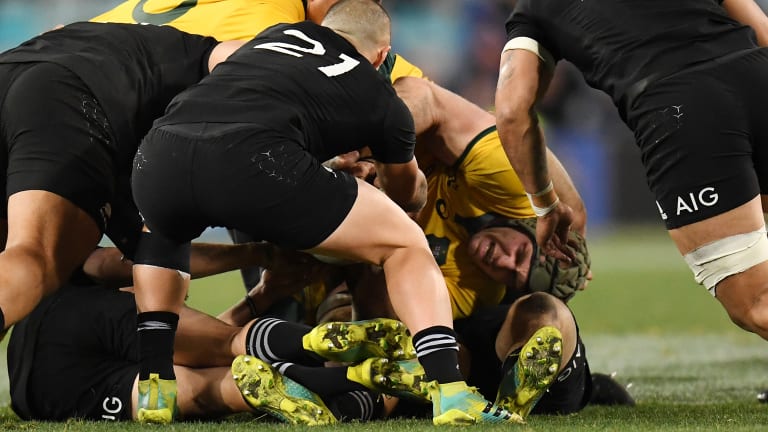 Turned over: Pocock gets upended in the ruck during another tough contest.

Pocock was matter-of-fact about the risks of his role as the Wallabies’ breakdown jackal.

“There’s a lot of heat around the breakdown. It’s a big area. We saw what they were able to do with turnovers tonight,” he said. “That’s probably the bigger thing for us, to reduce the number of turnovers we’re actually giving away because that is what hurt us the last couple of games … eight tries directly from turnovers.”

The Wallabies flew home to Australia yesterday to break for a week before regrouping for their final two Tests on home soil. In Brisbane in a fortnight they will face a South African side desperate to atone for Saturday’s loss to the Pumas. A week later they will host Argentina – now coached by their former set piece coach, Mario Ledesma – on the Gold Coast.

The Wallabies will be under pressure to secure two home wins after their recent horror run of just one win from the past seven Tests.

“We’re going to have to be better at building pressure and keeping it on,” Pocock said. “We got down their end a few times and coughed up the ball or turned it over at a ruck and then they’re on the attack and scoring long-range tries. It’s something we’ll have to get better at. We have been working on it."

Despite the results, the Wallabies are showing no signs of internal disquiet. Pocock and captain Michael Hooper appear to be working hard together to figure out what it is that is not coming together for the side.

“There’s a lot of thought going into that stuff. Hoops is doing a great job. I’ve been really impressed with how much thought he’s putting into it,” Pocock said.

“It’s just one of those things where you put in a lot of effort and you don’t see the results. New Zealand are a really good team and I think we’ve seen that. That’s that step we need to take.”