For a long time, Alphonso Davies knew only the outline of the story. His parents had given him the bare facts, but little more: that they had fled the bloody civil war engulfing their native Liberia; that he had been born in the refugee camp in Ghana where they sought shelter; that they had moved to Canada when he was 5.

He had been too young not only to understand where he was and what his family was enduring, but also for those years to leave any imprint on him at all. His memory kicks in, he said, at age 6 or so: He remembers starting school in Windsor, Ontario, but nothing before that. His parents, Debeah and Victoria, never volunteered to fill in the gaps.

“They didn’t really explain it,” Davies said. “It’s not something they talked about a lot. They didn’t really want to. It was a dark time in their history. They just wanted us to enjoy our lives in Canada, to be really happy in a safe place, where we could be whatever we wanted to be.”

Davies discovered much of the detail of his own story at the same time as almost everyone else. On the day in 2017 when he was officially granted Canadian citizenship, the Vancouver Whitecaps — the club where he made his name as a 16-year-old — produced a short film, part celebration and part commemoration of his journey.

It was the first time Davies had heard his parents’ firsthand account of the part of their life — and his — that he had never known. They described the decision to flee the violence stalking Liberia. They spoke about the hand-to-mouth realities of existence in Buduburam, the camp on the edge of the Ghanaian capital, Accra, where they found themselves. They talked about the hunger, the poverty, the uncertainty, the fear.

“They said it was like being in a container that you can’t leave, because you don’t know what would happen to you,” he said. “It was hard to find food and water. You don’t know what’s coming the next day. My mum didn’t know how she would feed me, take care of me. She cried. They were struggling, for themselves and for me. I didn’t know any of it until they did that interview.” 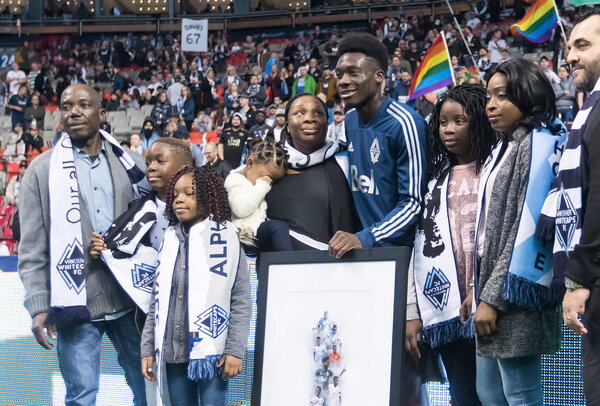 Davies was not alone in being touched by his parents’ account. He had always known he was Liberian: The gospel music that Victoria played at 7 a.m. every Sunday at their new home in Edmonton, Alberta, gave that away. He had known, too, that he had been a refugee. “It is part of my identity,” he said. “It is part of me.”

But it was only after his parents’ interview that he started to realize the significance of his story. “A lot of people reach out to me on social media to say what it means to them,” he said. “I started doing interviews about it, and I got a lot of feedback. It opens your eyes. It was amazing that people were inspired by it.”

Over the last couple of years, Davies has done all he can to share it. He has given interviews to Gary Lineker and the BBC about his background. Bayern Munich — the club that signed him from the Whitecaps as a 17-year-old and made him a German and European champion before he turned 20 — produced a report from Buduburam on the early years of his life.

Most important, though, in the first few months of his coronavirus-imposed lockdown last year, Davies started to use his fame and his platform to become an advocate for those suffering as his family once had.

For many of the 80 million or so displaced people around the planet, he said, “food and water can be hard to come by.” He continued: “It is not always possible in those conditions to social distance. Access to the vaccine is difficult. People are passing away. I wanted to tell people that they are not alone, that there are people out there who were in their shoes.”

He started to lend his support to the work being done by the U.N.H.C.R., the United Nations refugee agency, the body that helped organize his family’s resettlement in Canada. This week, the organization will appoint Davies as a good-will ambassador. He hopes to use the position to raise money to renovate soccer facilities in refugee camps. He is not only the first Canadian, but also the first soccer player, to be afforded the honor.

It is fitting in more ways than one. It is not just the first act of Davies’s story that makes him suitable, but the second, too. In his first few years in Canada, he struggled a little academically, partly because of a language barrier and partly, he will admit, through a lack of inclination.

As a gifted athlete, though, he never found any trouble fitting in. Edmonton is Gretzky country, but he did not take to ice hockey. (His skating has improved in recent years, he said.) Instead, he played a little basketball, and emerged as a talented track runner. But soccer was his first love, his clear gift, the sport he had grown up watching with his father, a keen fan of both Chelsea and, in particular, Didier Drogba.

He was — this is no surprise — the standout player on every team he joined. As such, friends came relatively easily. “Other kids saw I was good at sports, so they wanted to be my friends,” he said. Being picked first on every team is a reasonably sure shortcut to preteen popularity. “Also,” Davies said, with the air of a man keen to underline the point, “I was a cool guy.”

Though Davies’s soccer talent was unusual — not everyone, after all, is gifted enough to play for Bayern Munich as a teenager — this element of his story, according to those who work with refugees and asylum seekers around the world, is much more universal. “It is hard to think of an equivalent that has the same reach or impact,” said Naomi Westland, the founder of Amnesty International's Football Welcomes program.

Though it is natural, perhaps, to cite those from a refugee or migrant background who go on to professional careers as examples and inspirations — not only Davies, but the likes of Bournemouth goalkeeper Asmir Begovic and Bologna striker Musa Juwara, too — the most valuable work, in truth, is not concerned with unearthing talent.

Instead, it is helping refugees and asylum seekers to build a new life, to integrate and combat racism and prejudice, through soccer. Europe is dotted with teams dedicated to doing just that: Some of them, like the five English clubs that are part of Amnesty’s program, use the resources of the professional game to help. Others, like Liberi Nantes and Afro Napoli in Italy, are grass-roots organizations.

“You don’t need to be able to speak the language,” Westland said. “But playing in a team gives you a chance to forget about the stresses of being in the asylum system, a way to make friends, a chance to make connections. For people who have had to leave their homes, their countries and their lives behind, it can give you a sense of belonging, and a sense of purpose. That’s incredibly important.”

Davies would not disagree. In those earliest memories of his, what mattered was not just his nascent brilliance on the field, the preternatural talent that would eventually take him far from home, to Vancouver and on to Munich, but the fact that he could use soccer as a common language and a shared interest. It was his way of “settling in,” he said. “It wasn’t a big soccer school, but there were enough kids who followed and understood.”

He can still recall the endless, cyclical conversations about whether Lionel Messi or Cristiano Ronaldo was the superior player; when he first met Arjen Robben, in the changing room in Munich, he remembers being “star struck” by the sight of the man Davies was ardently convinced should have been anointed world player of the year in 2013.

He still, he said, has to remind himself at times that he is actually talking to Robert Lewandowski, the guy who used to score goals for him on the FIFA video games. He did not know that is how his story would turn out at the time, of course. He did not know he would go on to be an inspiration. All he knew was that he wanted to talk about, and play, soccer. “Talking about it, being surrounded by it, that’s how you make friends,” he said.