ATLANTA — Amed Rosario drove in a career-high four runs, the rookie Pete Alonso rocketed his latest homer into a terrace fountain far beyond the center field fence, and the Mets beat the Atlanta Braves, 6-3, on Thursday night.

Steven Matz pitched six effective innings to snap the longest streak of starts without a decision in Mets history. Rosario hit an early three-run homer and the Mets ended Atlanta’s three-game winning streak in the opener of a four-game series — the first meeting this season between the National League East rivals.

Alonso lined a two-run homer in the seventh off reliever Jonny Venters. It was a 454-foot blast with a 118-miles-per-hour exit velocity, and the ball wound up floating in the water beyond straightaway center. The only players to hit a ball harder since the inception of Statcast are Giancarlo Stanton, Aaron Judge and Mike Trout.

Alonso began the night with 15 runs batted in, a Mets record through the first 11 games. His sixth homer put the Mets ahead, 6-2.

With runners at second and third in the ninth, Edwin Diaz struck out Freddie Freeman with a 99-m.p.h. fastball for his fifth save.

Ronald Acuna Jr. homered against Mets reliever Luis Avilán in the eighth. The ball sailed 462 feet over the left field wall and into the second level of stands for his fifth home run. 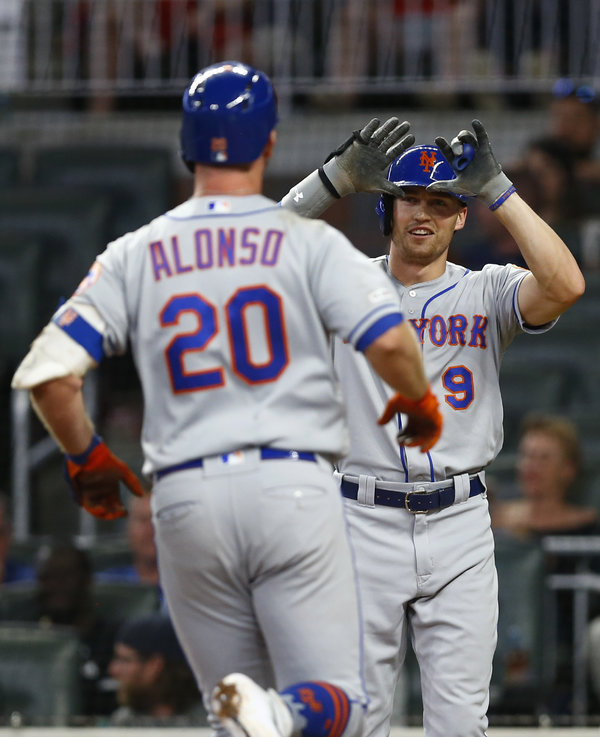 Matz (1-0) had gone eight straight starts without a decision, a streak that began last Sept. 1. He allowed two runs and four hits with one walk and eight strikeouts.

Rosario’s home run gave the Mets a 3-1 lead in the second. They had three other hits against Braves starter Kevin Gausman: Juan Lagares’s single in the fifth, Wilson Ramos’ single in the sixth and Jeff McNeil’s single that advanced Ramos to third and chased Gausman. Wes Parsons gave up Rosario’s run-scoring single to make it 4-2.

Gausman (1-1) allowed four runs, three walks and struck out five. He walked his first two batters in the second before facing Rosario.

Atlanta took a 1-0 lead in the first on Acuna’s triple. Johan Camargo’s first homer cut the Mets’ lead to 3-2 in the second.

Matz improved to 5-0 with a 2.78 earned run average in eight career starts against the Braves. He has a 2.10 E.R.A. in his last 10 starts dating to last season.

A few hours before the first pitch, second baseman Ozzie Albies and the Braves agreed to a $35 million, seven-year contract, a deal that includes team options for 2026 and ’27.

Albies struck out against Robert Gsellman with the bases loaded in the seventh and went 0 for 5. He made a dazzling play in the fourth, leaping to snag a liner by Ramos.

Braves Manager Brians Snitker was ejected in the bottom of the eighth by plate umpire Dan Bellino for arguing balls and strikes.