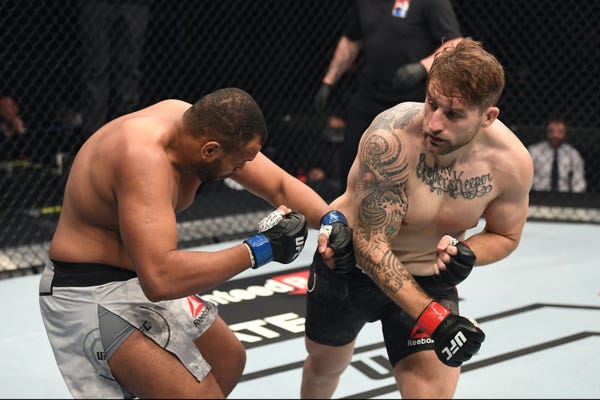 An American cop called Chris Daukaus remains unbeaten in the UFC after scoring a brutal 45-second knockout on Fight Island.

Daukaus normally works for the City of Philadelphia as a uniformed police officer, patrolling the 24th district in North Philly, a job he's had for a decade.

But Daukaus is also a professional fighter, and showed just what he can do on Saturday at a behind-closed-doors UFC show in Abu Dhabi, UAE as part of the firm's latest pandemic-era residency on Yas Island, better known as Fight Island.

With rapid-fire fists, Daukaus dropped Brazil's Rodrigo Nascimento with hook shots in the first round, causing the referee Marc Goddard to wave the bout off.

On the ESPN broadcast, the UFC commentator Dan Hardy marveled at the winner's "hand-speed [which is] ridiculous for a heavyweight."