Mario Andretti says he remembers everything about that May afternoon 50 years ago when he won the Indianapolis 500 — including the belief that his victory could be followed by a few more in the world’s biggest auto race.

More victories at Indianapolis, as race fans know, have not come for Andretti, now 79, or for his sons, his nephew or his grandson. Mario Andretti is aware that there is even a Wikipedia page for the “Andretti curse,” detailing the family’s 0-for-68 record at the Indy 500 since 1969.

“Over all, this ‘curse,’ I don’t buy at all,” Andretti said recently. “It was just something they came up with. I don’t agree with that at all. I look at the overall picture. We had some productive times there.”

Mario Andretti’s name is synonymous with speed: He won four national championships, a Formula One world championship, a Daytona 500 stock-car race, the 12 Hours of Sebring and his class in the 24 Hours at Le Mans. He even won midget-class and dirt-track races.

His victory at the 1969 Indy 500 in an STP-sponsored Hawk/Ford stands alone because of his back story: At 15, he emigrated from Italy to the United States in 1955 with his family, settling in Nazareth, Pa. He spoke no English. 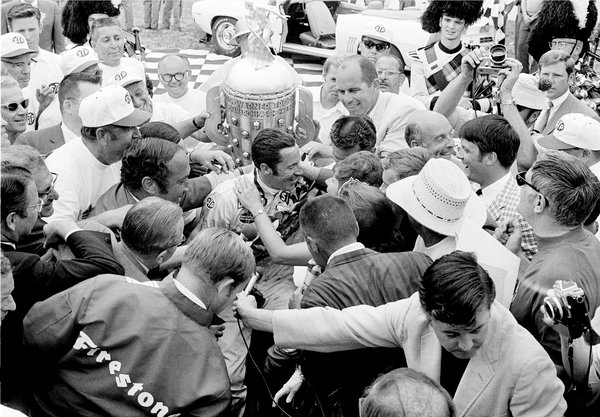 “It’s like the true American dream, the way his whole story was,” his elder son, Michael, said recently. “The biggest American race, the biggest world race, coming over from Italy.”

The victory remains so vividly memorable in part because no Andretti has been able to duplicate it.

Jeff Andretti, Mario’s younger son, was named rookie of the year at Indy in 1991 but was severely injured when his car rammed the wall in the 1992 race after the right wheel hub of his car broke. John Andretti, the son of Mario’s twin brother, Aldo, was 0 for 12 in the Indy 500.

Only Marco, with two victories in 222 IndyCar Series races, remains active as a driver. On Sunday, he will start 10th in the Indy 500’s 33-car field, driving a car that is the same Day-Glo red as the one that his grandfather drove to victory in 1969 for the owner Andy Granatelli.

“I think when I’m belted in, I don’t think I’m going to be thinking about the car too much, honestly,” Marco Andretti said. “There’s some other things to worry about. But what a cherry on top that would be, to win it on this particular year.”

Marco has finished third at Indy three times since the 2006 race, in which he took the lead from his father on the 198th of 200 laps. With Michael Andretti trying to block Hornish, Marco appeared to have won — but Hornish caught him in the last 450 feet. Marco finished second and Michael third.

“At that point, when he passed me, I thought he was going to win the race,” Michael said. “It was such a letdown when I found out Hornish passed him. Very disappointing.”

A year after losing a spectacular wheel-to-wheel, late-race duel with the four-time winner Rick Mears, Michael Andretti led the 1992 Indy 500 by nearly 30 seconds on a cold day when the fuel pump on his car broke, the crowd gasping as he slowed. Al Unser Jr. won the race.

Mario Andretti, then 52, started third but crashed in the 79th lap. He had decided to retire in 1994, prompting an “Arrivederci, Mario!” campaign from the Championship Auto Racing Teams series before the Indy 500. He finished only 23 laps before his car’s fuel system broke.

Andretti’s car was running at the finish in just six of his last 24 races at Indy. He won the 1969 race after wrecking a Lotus, his primary car, in practice, sustaining burns to his face. Before that, Andretti had failed to finish three of his four previous races at Indy because of mechanical problems.

But then came Friday, May 30, 1969, Memorial Day. He started second, took the lead from A.J. Foyt by the end of the first lap, reclaimed the lead near the midway point, then took it for good from Lloyd Ruby, who had to drop out with 95 laps left, and beat Dan Gurney by nearly two minutes. Granatelli, the ebullient owner, planted a kiss on Andretti’s cheek in Victory Lane.

“Here’s the thing. As a race, it probably supersedes any other race in the sport,” Mario Andretti said. “It’s known all over the globe. Career-wise, I think it’s very useful to have that in your repertoire. I won seven championships over all — four national championships and a world championship, but people say, ‘Hey, Mario, I saw you win in 1969!’”

Michael Andretti was 6 when his father won the Indy 500. He remembers almost nothing about the race because he was at Aldo’s house in Indianapolis with Jeff and their cousin John, and the race was not televised live in Indianapolis then.

He does remember the parade that was held in Nazareth — with Mummers string bands and a replica of the lunar module — to honor his father later that summer. And he did pick up an appreciation for what that victory meant to the sport and the family. So has Marco, born in 1987.

“It was almost like he wasn’t supposed to win the race, right?” Marco said. “Spare car, all that. That’s why we say if it was meant to be, it’s meant to be.”

Michael Andretti said of winning the Indy 500 as an owner: “It’s great, but it’s more of a shared-type thing, you know what I mean? When you win a race, you win it more for yourself. Even though it is a team thing, if you’re driving in it, you were the one in control of it. When you win, you have a different feeling than you have as an owner. I’m there sharing it with everybody. It’s a team I put together. I didn’t really do it.”

His father did. Mario said he was looking forward to Marco’s next race, in a car that is substantially faster and safer, especially in the corners of the two-and-a-half-mile oval, than the winning car he drove 50 years ago at the Brickyard. Marco qualified for Sunday’s race at nearly 229 miles per hour, 60 miles per hour faster than his grandfather in 1969.

“Mine is in the past,” Mario said softly.

But so many things about racing have not changed. “We took the limit with whatever tools we had available. And that’s it,” Mario said. “Today, you do the same.”