An Inning to Forget: Steven Matz of the Mets Allows 8 Runs and Records No Outs

PHILADELPHIA — In 31 pitches on Tuesday, Mets starter Steven Matz managed to surrender four hits, allow eight runs (six earned), hit Bryce Harper in the left arm, issue a walk, host two mound visits and have his earned run average more than triple. He did it all without recording an out or making it through the Phillies’ batting order at Citizens Bank Park.

When Mets Manager Mickey Callaway came to the mound to remove him, Matz just stared.

His greatest display of frustration came after he had given up a double to catcher J.T. Realmuto that drove in two runs. Matz punched the air and shouted at himself. On his next pitch, Scott Kingery hit a three-run homer. Two batters later, Matz allowed another home run, to Maikel Franco.

The Mets were down by 8-0 when Matz was replaced by reliever Drew Gagnon, were down 10-0 by the end of the first inning, and eventually lost, 14-3.

“Poor effort tonight,” Matz said after the game. “Just got to wash it.”

It was a day of things going poorly, and that did not stop when Matz exited.

Shortly after Gagnon took the mound, Callaway sprinted out to center field with Brian Chicklo, the team’s trainer. They spoke with center fielder Brandon Nimmo, the leadoff hitter who had broken out of a slump in recent games.

Nimmo then exited the game, as well. It was later announced that his neck had felt stiff.

Matz’s mess followed a pattern of pitching woes for the Mets. Jacob deGrom, the reigning Cy Young Award winner in the National League, posted two non-quality starts in the last week and Zack Wheeler walked seven Nationals in a home game, but Matz’s failure to record an out established a new nadir. 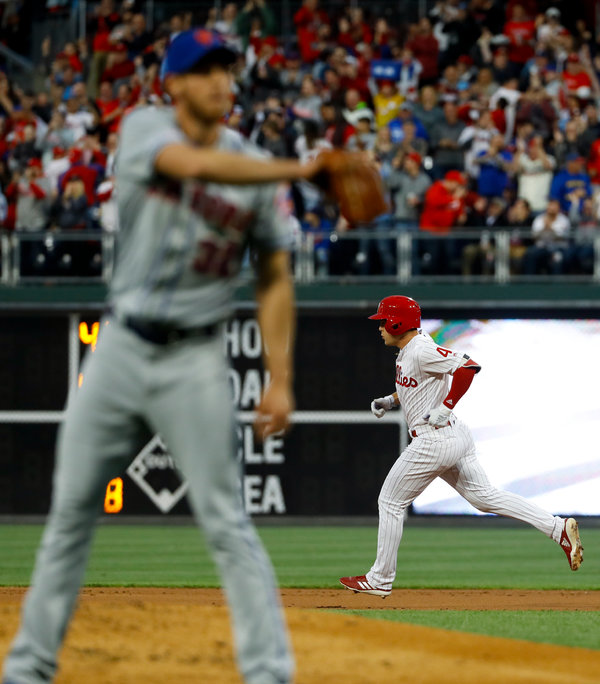 Matz became the second Mets starter to allow eight or more runs without recording an out, joining Bobby Jones, who did so in 1997. The last major league starter to accomplish the ignominious feat was Paul Wilson of the Cincinnati Reds — a former draft pick of the Mets — who did it in 2005. Wilson also managed such a pitching line in 2003.

The Mets did not exactly help Matz through his struggles.

Philadelphia left fielder Andrew McCutchen led off the game with a sharp hit to shortstop Amed Rosario, who allowed the ball to go through his legs into left field. Phillies shortstop Jean Segura then lined a double to right. Matz followed by throwing a 93-mile-per-hour sinker that hit Harper. Then came Realmuto’s double. And then Kingery’s homer.

Mets pitching coach Dave Eiland paid Matz a visit at that point. Phillies second baseman Cesar Hernandez worked the count full before Matz walked him. Franco, Philadelphia’s first baseman, waited out two sinkers that Matz failed to put in the strike zone before jumping on an 83 m.p.h. changeup for a three-run blast.

Matz’s night was done. He had thrown just 17 strikes.

Gagnon struck out the opposing pitcher, Nick Pivetta. But the Phillies did not stay quiet for long. McCutchen doubled on a first pitch. Segura grounded out, and Harper walked. Realmuto stroked a ball to left that Jeff McNeil struggled to find in the lights. It was ruled a double, but McNeil was charged with an error for allowing the runners to advance on his throw to no one.

Finally, Kingery grounded out. The first inning was over, and the Phillies, who were a half-game behind the Mets going into Tuesday’s game, had a 10-0 lead.

They Mets eventually eked out three runs, with two coming on solo homers by Wilson Ramos and Michael Conforto. But thanks to Matz’s perfectly imperfect start, the result was decided before the Mets had recorded an out. And with that, the Phillies took the lead in the National League East.