Washington, DC: A former teammate of Michael Phelps and two-time Olympic relay gold medallist, Klete Keller, was among the throng of President Donald Trump supporters who stormed the US Capitol last week, according to video footage posted online.

Keller, a decorated swimmer who represented the United States at the Summer Olympics in 2000, 2004 and 2008, is seen towering over other Trump supporters inside the US Capitol Rotunda, wearing a Team USA jacket. The video was taken by reporter Julio Rosas, and Keller's participation was first reported Monday by SwimSwam, a popular swimming website. 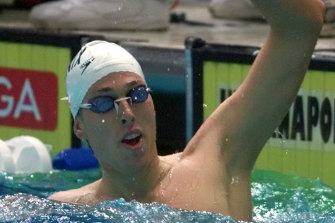 Keller, 38, has made no public comments about his presence at the Capitol. He did not return phone messages or emails seeking comment Monday, and his telephone was no longer accepting messages on Tuesday.

Since the video surfaced, many people have alerted the FBI and law enforcement on social media to Keller's apparent participation in the riot, which resulted in five deaths, including that of a US Capitol Police officer.

Standing almost two metres tall and wearing a familiar Olympic jacket, Keller was easy to identify for many swimmers, coaches and officials who had competed with and against him over the years, two of whom told The Washington Post they recognised the maskless Keller in the footage.

In the video, he can be seen in the Rotunda, at one point locked amid a mob of Trump supporters and law enforcement officers pushing against each other. 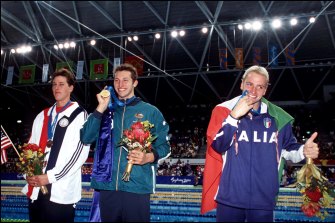 Klete Keller, left, after finishing third behind Ian Thorpe in the 400m freestyle at the Sydney 2000 Olympics.Credit:Getty

The jacket Keller was apparently wearing at the Capitol – with "USA" printed across the back and an Olympic patch on the front – does not appear to be one from his Olympic days but rather worn by Team USA members who competed at the 2018 Winter Games in PyeongChang.

"We were not aware of this and cannot confirm its accuracy," a spokeswoman for USA Swimming said in an email Monday. "We respect private individuals' and groups' rights to peacefully protest but in no way condone the actions taken by those at the Capitol last week."

Keller has deleted his social media accounts, where he reportedly espoused pro-Trump views.

Keller was a top American swimmer for nearly a decade. He anchored the US 4x200m freestyle relay at the 2004 Games in Athens, where he memorably beat Ian Thorpe to the wall and won gold for Phelps and his American teammates.

Keller helped the US team defend that Olympic title four years later in Beijing, and also won two Olympic bronze medals and a silver during his decorated racing career.