Maddy Proud started the NSW Swifts’ first Super Netball grand final season as the club’s ebullient new captain, became an ACL casualty halfway through, and will end a “bittersweet” year on Sunday as … well, what exactly?

“I’d just say a bit of everything: spirit captain, actual captain, off-court captain, side coach – maybe the best of all worlds? Is that what we’ll say? Or jack of all trades!’’ quips Proud, who would obviously like most of all to be called a player in the winning side on Super Netball’s biggest day, but will be a quasi-coach and morale officer instead. 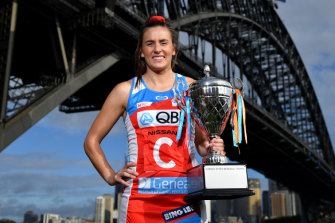 And, as the Swifts’ prepare to challenge the minor premiers and two-time defending champions Sunshine Coast Lightning in Brisbane, the 25-year-old can joke with her housemates (fellow injury victim Kate Eddy and fit duo Maddy Turner and Sophie Garbin), that it may almost be destined to be this way.

In her nine years at the elite level, South Australian Proud is yet to play in a grand final. She was one year late arriving for the Adelaide Thunderbirds’ 2010 premiership, and absent on a year’s secondment at the AIS preparing to captain Australia’s World Youth Cup team when her original club won again, in 2013.

“So I’ve said to the girls that we have to win now I’m out, because that’s the way that this works,’’ says Proud, who recounts her misfortune with a trademark laugh, but is also honest enough to admit her disappointment at missing the big dance.

“The flip side is that … this is probably my first really serious injury which has cost me an actual season. So it slips back and forth between feeling a bit sorry for yourself and realising that things definitely could be a little bit worse.

“Having a few other girls that have been injured this year, as well, has sort of made it harder but also a bit easier knowing that you’re not the only one that’s in that position.

"And unfortunately, I’m not the first person to do an ACL and I definitely won’t be the last, either.’’

It was in Brisbane that Proud’s season ended, three months ago, when her right knee crumpled on landing. There was “devastation” initially; not least because team and captain were both travelling so well. There were tears, too, shed on court by the gutted Swifts’ players, but Proud knew there was little time to wallow, for there were still seven games left, an overdue finals return and a title to be won.

Excitement is her primary emotion in grand final week, with the sidelined skipper still a key part of the build-up, set to address the team pre-game and then be her vocal best at courtside in the Swifts-supporting minority, for this is a not-quite-Sunny-Coast-but-still-Queensland crowd. Or as Lightning midcourter Laura Scherian puts it: “Well, it’s more our home than theirs, put it that way.’’

Proud hesitates to call what she does coaching, for that is the job of Briony Akle and her assistants Anita Keelan and Megan Anderson. “It’s maybe a mentoring, supporting, cheering sort of role. I’m still pretty much as involved as I ever was, just not literally on the court, I guess.’’

The view from that end of the bench has provided a different perspective, via a different and less self-involved lens, with Proud describing the current appeal of taking a top job one day as “never, ever, ever’’. Too stressful. No outlet for the adrenalin. So much to think about, and to manage.

But if she was in charge for this one, as the Swifts seek to inflict their opponents’ first loss since round six?

“The Lightning have beaten us three times this year, so the pressure’s all on them, which is something that we kind of like – that no one probably expects us to win,’’ says Proud, lamenting the brief lapses she says proved costly in rounds four and 11 and a 10-goal major semi-final loss at Sippy Downs.

“At the end of the day in a grand final, anything can happen, and if we just turn up on the day ready to go how we played last week against the Vixens and how we’ve played all season then I think we’re going to be in a pretty good position.’’

“(Lightning goal defence) Karla Pretorius has probably been the best player in the competition all year, so Helen (Housby) or Sophie Garbin, whoever gets that spot in goal attack, is going to have a huge role to play.

"It’s about giving her enough credit, but also letting the ball go. That’s something that probably let us down the last time we played them, is that we probably got a little overwhelmed with how good their defenders are, (so) we weren’t taking many risks and letting the ball go into our shooters.

“Then Sarah Klau down the other end, whether it’s on Cara Koenen or Peace (Proscovia), they always have a good battle, and the Lightning ball feed has been phenomenal these last few weeks, so with Laura Langman in the middle we’ve got to make sure that Paige (Hadley) can keep her under control and keep controlling the pace of the game as well.’’

With Hadley the stand-in captain, the official leader admits that a first Swifts’ Super Netball title would ultimately be “100 per cent sweet’’, whatever her part in it.

LINDA PEARCE PREDICTS: Given that away grand finals proved to be no barrier to the Lightning’s 2018 premiership charge, then this return to a (close enough to) home version should provide the perfect send-off for not just coach Taurua but, one suspects, the great Langman, too. Seeking their first flag since 2008, the Swifts have overcome multiple injury obstacles this season, but not, in three previous attempts, the Sunny Coast. Pretorius is a rich source of turnovers, which pass through a dynamic midcourt into a versatile attack. Too good, again. Remarkable, really. Lightning by 6.