The Australian Olympic Committee won’t restrict personal electronic devices for its athletes at the Winter Games despite some other national bodies banning them over fears of spying from the Chinese government.

With just weeks before the February 4 start date, the Dutch Olympic Committee has become so concerned about the threat of cyber surveillance that its competitors have been forbidden from taking personal phones and laptops to China. 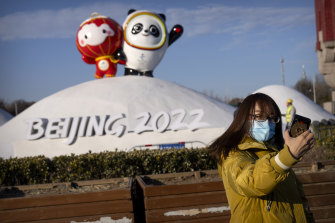 Several nations are warning their athletes about taking phones to China for the Winter Olympics.Credit:AP

They will be given temporary phones and laptops which will reportedly be destroyed upon their return to ensure they cannot be tracked or information extracted by the Chinese government.

The British Olympic Association has similar fears and while Team GB athletes won’t be banned from using personal devices, they have been counselled against taking them to China. They will also be offered temporary devices for use at the Games.

An AOC spokesman said athletes and support staff would be educated about the potential cybersecurity risks at the Games but any decision to take personal devices would be left up to the individual.

All athletes will be given Samsung phones and local SIM cards by the International Olympic Committee, while staff will have access to an AOC-specific Wi-Fi in allocated areas. They will be permitted to use the official Wi-Fi provided by organisers to access social media sites and other communication apps.

“Athletes will have access to the official Wi-Fi at the Games which will give them access to their social media sites and other comms options,” the AOC said.

“AOC support staff and officials will also have access to an AOC established Wi-Fi in areas allocated to us which is being provided by our IT branch.

“We are taking all the appropriate cybersecurity measures in order to ensure we are protected from malware and viruses. The AOC is providing athletes with advice on minimising risk.

“As at previous Games, the IOC provides the athletes with a complimentary phone and SIM Card, while the AOC provides HQ staff with a local SIM.”

Concerns about cybersecurity add another layer of issues for athletes and Olympic associations as China attempts to maintain a strict COVID bubble amid surging global cases of the omicron variant.

A BOA spokesperson said: “We’ve given athletes and staff practical advice so that they can make their own choice as to whether they take their personal devices to the Games, or not. Where they do not want to take their own equipment, we have provisioned temporary devices for them to use.”

News, results and expert analysis from the weekend of sport sent every Monday. Sign up for our Sport newsletter.