English trainer Charlie Appleby has had a stellar season, winning the English Derby for Godolphin with Masar and sending out top class winners in Ireland, France and North America for Sheik Mohammed’s multi-national team.

Now he can add a Melbourne group 1 to his burgeoning curriculum vitae after the spectacular success of top weight Jungle Cat in the Sir Rupert Clarke Stakes at Caulfield.

The seven-year-old, who had notched a hat-trick in Dubai in February and March – including a win in the group1 Al Quoz over 1200 metres – had been off the track for nearly six months and had criss-crossed the world in the meantime. 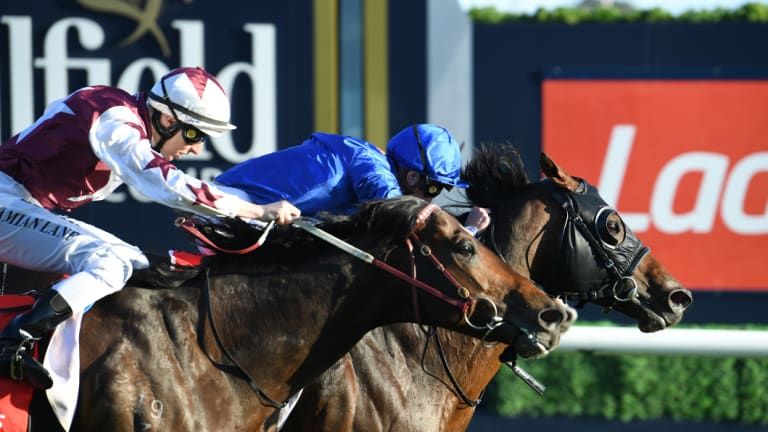 But travel has clearly broadened the mind of this son of Iffraaj, who, according to his English rider James Doyle, always seems to improve when he gets on a plane to run somewhere other than his homeland.

A 58-kilogram impost proved no burden for Jungle Cut as he stormed down the centre of the track under Doyle’s vigorous urgings to deny the long-time leader Dollar For Dollar by a short half-head, with the third horse, the well fancied Land of Plenty, a similar margin away.

Godolphin’s two other runners, Home of the Brave and Osborne Bulls, both from the James Cummings stable, were a further length adrift.

To put the English raider’s feat in perspective, the 1400 metres Sir Rupert Clarke is one of the most fiercely contested handicaps and the only horse that has carried more in the past 18 years to win it is Testa Rossa, who shouldered a 58.5 kilo burden in 2000.

The win was the culmination of a plan that was hatched that desert night in Dubai when Jungle Cat, who usually finds a few too good for him in 1200-metre group1 races in Europe, won the Al Quoz.

Appleby thought he would measure up at group1 level over slightly further, but there are a dearth of high quality group1 races in the UK over 1400 metres. The contests of that status are in France, but usually softer underfoot conditions there would have been against him, as Appleby explained after the race.

‘‘He’s a quick-ground horse, and I thought you guys here might like him. He’s a good looking individual and it’s a job he deserves because he’s been ultra consistent all his life. He’s danced every dance in Europe at group1 level and is always thereabouts. This year in Dubai he really captured his form. Winning the Al Quoz was a race he justifiably deserved to win.

"The plan immediately was to bring him over here because group ones over 1400 metres are few and far between and generally they are in France. The ground there is always on the easy side which doesn’t suit him. He loves to hear his feet rattling.

‘‘It’s nice when a plan comes off after freshening him up for so long.’’

There had been talk of a potential Everest tilt for Jungle Cat, but Appleby said he was now more likely to step up, rather than down, in trip.

‘‘Personally I think he is a seven furlong horse, maybe even step him up to the mile,’’ he said.

‘‘Mid-race he was flat to the mat, but he doesn’t half dig deep, and every time James asked him he kept finding a little bit more.’’

Doyle has won group 1s in England and Ireland this season but this was his first win at the highest level in Australia.

‘‘He struggled to go the early pace and they were running along at a solid tempo. He didn’t really take to the bends that well, but he finished really well,’’ Doyle said.