Are Kawhi, KD and LeBron Too Powerful? 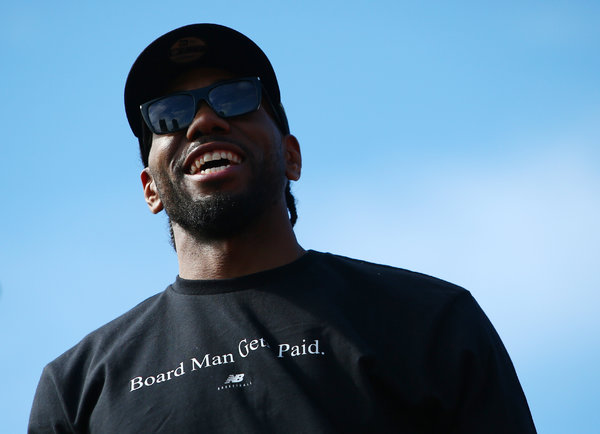 One week into N.B.A. free agency, two historically woebegone franchises have reveled in the splashiest acquisitions. The Nets and the Los Angeles Clippers outdueled the far more glamorous teams in their respective cities for the most coveted superstars.

It took ambitious signings and trades, in both cases, that were heavily orchestrated by the superstars themselves.

Consider this the latest reminder that the biggest names in this game wield a level of team-building influence seen in no other major North American sports league. Kevin Durant and Kyrie Irving made a joint decision to spurn the Knicks and team up with the long-suffering Nets. Then Kawhi Leonard shed his well-earned reputation for letting his game do all the talking by taking an unforeseen lead role in recruiting Paul George to join him in Los Angeles, thus enabling the Clippers to outshine the Lakers for once.

The spotlight-averse Leonard was never regarded as the sort of star who would embrace the franchise player/general manager blueprint that LeBron James ushered into prominence in the summer of 2010, when James and Chris Bosh joined Dwyane Wade to form a so-called superteam in Miami. James, in fact, strongly believed that he and his newest marquee teammate, Anthony Davis, could convince Leonard to join them with the Lakers.

By taking ownership of his future in such a LeBron-esque fashion, Leonard has also hauled the N.B.A. to a potential crossroads. The manner in which Leonard persuaded George to push for a trade out of Oklahoma City — with two seasons and a player option for a third left on George’s contract — has raised the volume on a divisive debate about stars recruiting stars and the control top players seem increasingly intent on asserting.

Oklahoma City Mayor David Holt accelerated that dialogue Saturday when he began a farewell tweet to George by saying: “I suppose we all have to get used to the N.B.A reality that stars are free agents even when they’re not.” Holt’s words were inevitably met with derision in some corners — mainly from Seattle SuperSonics fans and supporters forever rankled by the circumstances that led to the Sonics relocating to Holt’s city.

Yet there is little doubt that more than a few N.B.A. front-office executives wish they had the license Holt did to raise such concerns so publicly.

A better indication of how unsettling the N.B.A.’s team owners and Commissioner Adam Silver have found Leonard’s recruiting could come as early as Tuesday. Ownership representatives from all 30 teams are scheduled to convene for a series of closed-door meetings during the league’s annual summer league in Las Vegas. The helplessness that some teams inevitably feel against the LeBrons and Kawhis targeting their stars is virtually certain to come up when Silver addresses the news media.

There is another dimension to the power dynamics Silver is bound to be asked about: In a league in which three-quarters of the players are black, some have pushed back on the very term “owner” as outdated, offensive and feeding a tone of servitude.

The levels of player-to-player plotting appear to be rising, but much of this discourse is hardly new. Even before Silver replaced David Stern in February 2014, league officials had insisted that it would be overly intrusive, as well as complicated, to try to police player conversations unless there was evidence to suggest that the players were taking directives from their teams’ front offices.

A case can likewise be made that the league, at least this summer, has benefited from the players’ machinations. Although each star acted with his own intent, the N.B.A. may be more competitive than it has been for years, after what is already being called the most frenzied week of free-agent action in the league’s history

The Golden State Warriors began each of the past four seasons as an overwhelming title favorite, but stars around the league suddenly are now more evenly spread out. That is thanks in no small part to Leonard, who could have chosen to form perhaps the most feared trio of all time had he swapped his newfound status as a hero of Canada for life alongside James and Davis with the Lakers.

The Lakers would have supplanted the Warriors as runaway favorites had they, rather than the Clippers, managed to lure Leonard away from the Toronto Raptors — just three weeks after Leonard led the Raptors to their first championship. The 2019-20 season is now likely to begin with no clear-cut juggernaut for the pack to chase. The Warriors have lost Durant while Klay Thompson could miss the whole season recovering from a knee injury.

There are a number of thriving small-market teams that the league can point to beyond the wide-open title chase. The Utah Jazz, Indiana Pacers and New Orleans Pelicans appear poised to make jumps in the standings in the wake of their smart off-season maneuvers. Fans in Oklahoma City, however, would undoubtedly tell a sadder story after seeing the Thunder absorb yet another direct hit.

In July 2016, various Golden State players — led by Draymond Green — mounted a successful campaign to lure Durant to the Bay Area. Three years later, George responded to the Thunder’s second consecutive first-round playoff exit by asking for a trade at Leonard’s strong urging. Critics of the Thunder’s Russell Westbrook, mind you, are bound to counter that the challenges of playing alongside the headstrong point guard contributed to the departures of Durant and George as much as any of Oklahoma City’s perceived shortcomings as a team or market.

Unlike Durant’s exit, though, adept negotiating by the Thunder’s general manager, Sam Presti, ensured that the team extracted the biggest single trade haul ever for sending George to the Clippers. The Thunder gave themselves a path to rebuilding amid the growing possibility that Westbrook will be the next to ask out.

Friendships and location have also heavily influenced recent player movement, which muddles the picture about which factors mean the most in free agency. Leonard’s desire to play back home in Southern California was at the root of Toronto’s fears about keeping him. George wasn’t known by rival front offices to be angling for an escape from Oklahoma City, but he found the opportunity to join his pal Leonard for his own Southern California homecoming too attractive to decline.

Irving wanted badly to team up with Durant and he grew up in New Jersey. He insisted after committing to the Nets that he had always dreamed of playing for them. Durant (Maryland) and Boston’s Kemba Walker (New York) didn’t exactly go home, but their respective free-agent moves certainly got them closer.

Segments of the sporting public have always been uncomfortable with star players who exert their influence — whatever their motivations. And owners in every sport have long used every possible lever to limit players’ power.

Yet the noted basketball author Sam Smith pushed back in an interview Saturday, saying: “I love what the players are doing. People whine about the inequity of players building superteams, but owners and the smarter G.M.s, like Red Auerbach and Jerry West, were celebrated when they did it and built the best dynasties.”

Leonard’s flexing, in any case, was unexpected and truly out of the box. He shunned the traditional agent community to put his uncle, Dennis Robertson, in charge of Team Kawhi. He demanded no leaks from the teams courting him and, for the most part, succeeded in scaring them into silence. He sat back when free agency opened June 30, let a full day and more than 50 deals pass and then began a systematic five-day quest to lock in the partnership he wanted.

Some thought he was taking his time for vanity, but Kawhi was simply exerting behind-the-scenes pressure on the Clippers to part with every last trade asset they had.

Perhaps it is time for Smith, who wrote the seminal book, “The Jordan Rules,” to pursue a follow-up tome to delve into the merciless manner in which Leonard operated both on and off the floor as a Raptor: “The Kawhi Rules.”

“Who knew that Kawhi would not only rule the league but rewrite the rules of free agency?” Smith said. “It says a lot for a guy who is known for saying nothing.”