Arike Ogunbowale Is Ready for Her Next Shot

For Arike Ogunbowale, the trip to the top of the Empire State Building on Wednesday was unusually fast.

It had been arranged for her to bypass the lines and take express elevators to the observatory on the morning she was to become a professional basketball player. In the hours leading to the 2019 W.N.B.A. draft, these kinds of experiences did not faze Ogunbowale. Not after she had become one of the most recognizable faces in college basketball after hitting a pair of buzzer-beaters for Notre Dame in last year’s Final Four — one to slay Connecticut, the other to best Mississippi State and win the national championship.

“Nah, I’m used to life throwing new things at me now,” Ogunbowale said with a smile as she looked out over the New York skyline.

Even for the relentless Ogunbowale, the past week has brought a particular kind of whiplash.

On Wednesday night, the Dallas Wings selected her fifth in the draft, after the Las Vegas Aces took her college teammate Jackie Young with the top pick.

“You know, Dallas is a great place, and they have a great coach there, so I’m really excited,” Ogunbowale said, referring to Brian Agler, who has won the league title with teams in Seattle and Los Angeles. “I’m ready to get started.”

The draft followed her vintage set of performances in this season’s Final Four: 23 points in another win over Connecticut, and a game-high 31 points in the national title game against Baylor. Ogunbowale’s final shots came after a drive to the basket that yielded two free throws in the waning seconds, her team trailing by 2 points.

Then, the unthinkable: a miss. And a championship lost. Ogunbowale’s painful moment played out on the national stage, too, amplified in part by her previous success. Her mother, Yolanda, raced down from the stands after the game to reassure her, to say how proud she was.

“Over time, she’s going to realize that she won’t be defined by that moment,” Yolanda said Wednesday, hours before her daughter would hear her name called at the W.N.B.A. draft at Nike’s New York headquarters. “I was just hurting for her, and for her teammates, because they wanted it so bad.”

And there would be no time to process. A late Sunday night game turned into a Monday morning flight to South Bend, Ind., where Ogunbowale has one more class to complete at Notre Dame before she graduates. 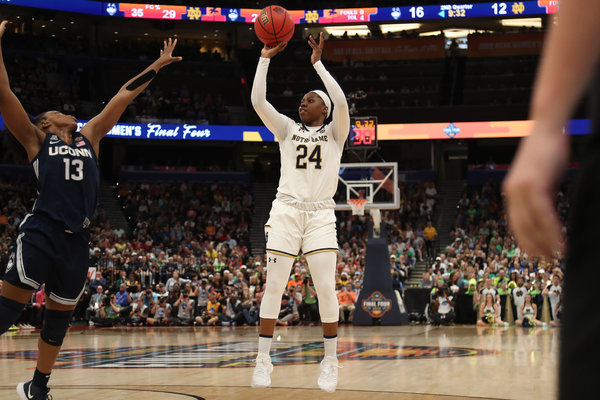 Then it was onto New York, to see the realization of a professional dream that dates back to high school in Wisconsin, though first Ogunbowale had to choose basketball over soccer. (Oddly enough, Baylor recruited her for soccer.) She and her mother both say she could have gone pro in that, too. Confidence, backed up by results, runs in the family.

The path Ogunbowale chose has worked out pretty well. Over these last few days, her strength and her network of fans have fed off each other. Yolanda said Arike’s bubbly personality had drawn people into her orbit since she was a little girl.

Fans recognized her at the airport as she headed back to school, and some approached to cheer her up. People took notice, too, up on the Empire State Building observation deck. For Ogunbowale, it is becoming clearer that everyone still sees in her that dynamic personality, that same person who hit buzzer-beaters, who scored 55 in a high school game, who can count LeBron James and Kobe Bryant among her fans.

“Kobe, LeBron, all of them, they’ve missed some important shots in their lifetime,” Ogunbowale said. “It’s a part of the game, you know? I’m not going to be able to make every shot. So I’m glad about my career, and I think I had a great four years. Everybody’s been telling me that. I mean, that’s just one shot. But what you’ve done these four years for the program, for just women’s basketball in general, is big.”

How big? After the loss, Bryant reached out directly to encourage her. There seems to be something about Ogunbowale that make people root for her (unless they are part of the Connecticut faithful, that is).

And as her mother explained, Ogunbowale engenders a two-way connection, something of particular import for W.N.B.A. teams hoping to win both on the court and at the box office.

Liamani Segura, the 10-year-old girl who sang the national anthem at the title game, wanted a picture with Ogunbowale. Segura’s father worried Ogunbowale wouldn’t want to take one after such a difficult loss. But, as Segura’s father later told Yolanda, Arike approached Segura on her own for that photograph.

“So that’s the type of person she is,” Yolanda said of her daughter. “The person who, in the midst of that pain, she took her time to do that.”

And so while few expected Ogunbowale to be the first overall pick on Wednesday night, everyone wanted to hear from her, as she headed to Bleacher Report to talk about her favorite sneakers and to CBS for an on-camera interview, before getting down to the serious business of choosing a draft night outfit.

Erin Kane, Ogunbowale’s agent, had selected several options, and they headed to Express to see a stylist.

“You look great in a jumpsuit,” the stylist said as Ogunbowale settled on a sea-foam green one.

“Oh, I know,” Ogunbowale replied, ready for her close-up.