Arsenal's spending power will be further strengthened next year after the club agreed to a major kit deal with German manufacturer adidas worth around £50 million ($92.5 million) per season.

The five-year agreement, which begins on July 1, will dwarf their current deal with Puma which is understood to be worth roughly £30 million a year. 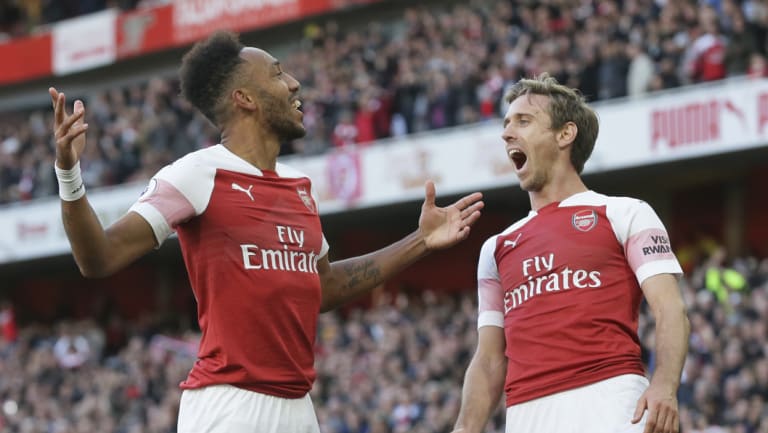 Moneyball: Arsenal have announced a series of lucrative new deals.Credit:AP

The agreement with adidas represents Arsenal's third off-field boost of the year at a time when a spiralling wage bill is putting increasing pressure on finances.

In February, the club agreed a new shirt deal with Emirates that will be worth more than £200 million through to 2024.

In May, they partnered with the Rwanda Development Board in a £10 million-a-year deal that made "Visit Rwanda" the club's first sleeve sponsor.

Arsenal have been looking to close the commercial gap with Europe's leading clubs as they try to fund a series of big-money contracts, such as those given to Mesut Ozil, Pierre-Emerick Aubameyang and Henrikh Mkhitaryan this year.

It is believed Arsenal's decision to withdraw a contract offer to Aaron Ramsey was in part a result of the club's spending limitations.

In August, manager Unai Emery was facing significant restrictions in the January transfer window as a result of the club's wage bill climbing to record levels.

Arsenal's kit deal with Puma was the largest in British football history when it was announced in January 2014.

Arsenal have 26 official partners and managing director Vinai Venkatesham claimed this year that the club's shirt was seen 35 million times a day around the world.

Meanwhile, striker Alexandre Lacazette says it's too early to talk of the club returning to the top four of the Premier League, despite recording a ninth consecutive victory on Sunday.

Lacazette, who scored twice in the 5-1 thrashing of Fulham, said: "To talk about the top four is early.

"We have to keep quiet and work like we did before and the season is going well. Just work as we did and we will see at the end of the season.

"The team spirit is good, of course when you win it is better. We will enjoy it, we are working well and we want to continue like this."

Lacazette added that Aubameyang, who also scored twice, had become "like a brother" to him since his arrival in north London. "We talk every day and we like working together," Lacazette said.