NEW YORK CITY — Hillary Clinton couldn’t have picked a more historic day to be surrounded by some of her most ardent fans on home turf.

As the House voted to impeach President Donald Trump, Clinton, the 2016 Democratic presidential nominee who lost to Trump despite winning the popular vote, took the stage at Pace University, just four miles away from her home in Chappaqua.

The House voted on Wednesday to impeach Trump for alleged abuse of power and obstruction of Congress.

“It is a story of abuse of power, using the office of the president to further not the nation’s objectives but his own personal political objectives,” Clinton said. “The facts are not at dispute. This is not a he said-she said. This is what happened.

“It’s really important to me that I do everything I can and make sure that we retire the incumbent regardless of what happens,” she added.

What’s next? All eyes on the Senate after House votes to impeach Donald Trump

Clinton and her daughter, Chelsea, were at Pace to discuss their new book, “The Book of Gutsy Women.”

Lori Gowen Morton brought her daughters Nora, 12, and Kelly, 9, to the event to listen to the Clintons.

“I find it particularly satisfying today to be in the company of strong women celebrating other strong women,” she said. “I want my daughters to grow up with the confidence and resilience to pursue their own big ideas and overcome challenges and failures that come along the way.” 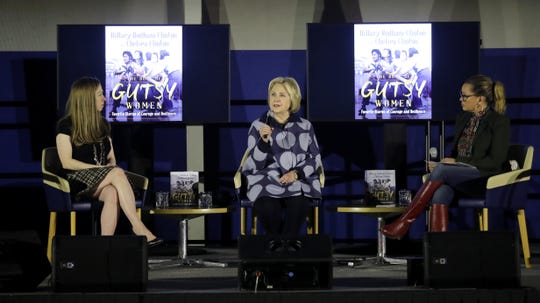 Another attendee, Frank Cosentino, said he was curious to hear Clinton’s take on today’s politics.

“She won the popular vote by 3 million and didn’t become president,” he said. “And now the person that beat her is getting impeached. It’s a crazy time.”

As a young lawyer fresh out of Yale Law School in 1974, Hillary Clinton was part of a team of staffers on the House Judicial Committee tasked with writing a memo on what should be considered an impeachable offense for an American president during Richard Nixon’s Watergate scandal.

Clinton and others on the bipartisan team produced a 64-page memo detailing the origins of impeachment and the constitutional grounds that would be needed to impeach an American president. Nixon resigned before the impeachment vote.

Analysis: For Trump and Pelosi, impeachment will shape their legacies and their futures

In 1998, Bill Clinton became the second American president, after Andrew Johnson in 1868, to be impeached when the House approved two articles of impeachment accusing him of perjury to a grand jury and obstruction of justice. The Senate acquitted him of both charges the following January.

The latest impeachment inquiry was launched following a whistleblower’s complaint that Trump pressured Ukraine President Volodymyr Zelensky to investigate 2020 Democratic presidential candidate Joe Biden and his son, Hunter, who served on the board of a Ukrainian energy company. 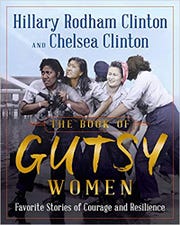 Cover for "The Books of Gutsy Women" by Hillary Rodham Clinton and Chelsea Clinton (Photo: Amazon.com)

The former first lady, senator, secretary of state and the 2016 Democratic nominee for president continues to remain a dominant voice in the national political conversation.

A new online Harris Poll survey of registered Democrats released by the Center for American Political Studies at Harvard earlier this week found that Hillary Clinton was their top choice for the 2020 Democratic Party presidential nomination.