EYES will be drawn to the Charlie Hall up at Wetherby, but aside from the feature chase you could argue the more competitive fare is served up at Ascot.

There are plenty of exciting young horses on show and we'll do our best to point you to a few winners. 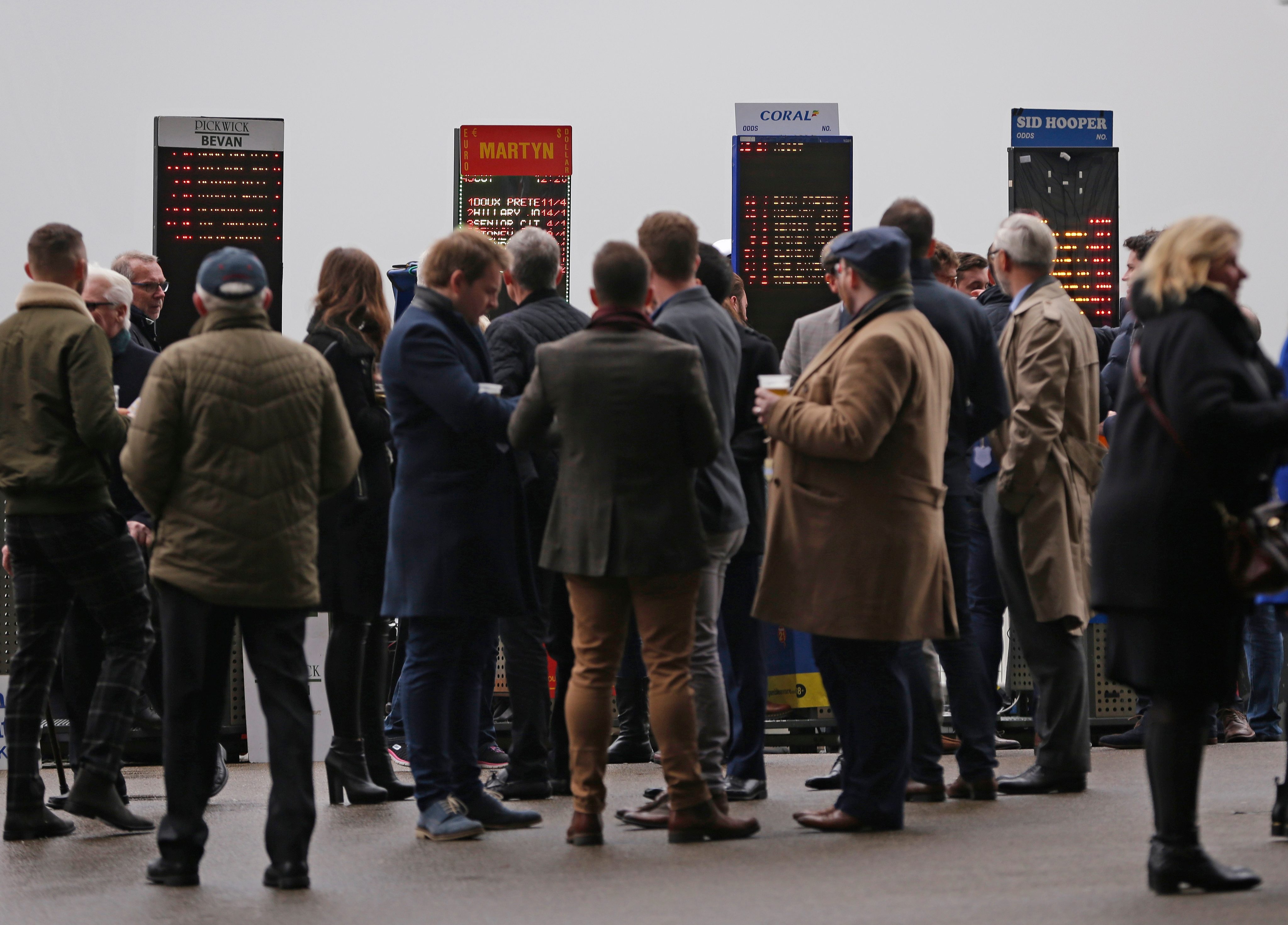 A real puzzle to get us going, full of unexposed hurdlers from plenty of big yards that could well prove better than this company down the line.

The obvious one is Mason Jar for Dr Richard Newland as he looks to make it three on the trot and this time with the services of 10lbs claimer Cillin Leonard.

He scooted up on handicap debut last time and although he gets a 6lbs rise for that, he's effectively racing off a lower mark here with the capable Leonard in charge.

However, this is far more competitive than the company he's faced so far. Unless he's stupidly strong in the betting we can get him beat.

The one that catches the eye is NORTHOFTHEWALL on handicap debut for Dan Skelton.

He'll appreciate going back up in trip and the form of his runs in novice company should read better than his mark of 120. The ground should be fine and a decent run is expected after a good comeback last time out over too short a trip.

Thibault has a bit more experience than some of these but is lightly-tried in handicaps and was only beaten by a mare now rated 129, last time out. There's more to come from Kim Bailey's youngster.

Rebel Leader looks on a tough enough opening mark, while Dorking Boy needs his wind-op to have had some effect to bounce back here.

On paper this looks a shootout between big hitters Nicky Henderson and Paul Nicholls.

Hendo runs Allart while Nicholls relies on Ecco, who was a very easy winner last time out.

Ecco was sixth in the Triumph last season before running out a cosy winner at Wincanton on his reappearance a couple of weeks ago.

He beat little there and didn't look entirely straightforward, but is clearly talented and is by far and away the one to beat. It'll take a smart type to get by him here.

However, he's not a punters price in a race like this and Ascot is a different challenge from Wincanton.

Allart needs to step up on his third in a bumper at Newbury a year ago. He looked a big raw horse there and may even take another season before we see him stepping forwards.

Neff shouldn't be underestimated from the Gary Moore stable. He won on hurdles debut at Fontwell and this discipline already looks his cup of tea over the flat. Moore wouldn't be running him at Ascot without liking him.

Financial Conduct was rated 97 on the flat and made a promising enough start to life over hurdles when second for Charlie Mann last season.

The horse that beat him that afternoon is now a 127 hurdler and the form is above average, but he would need to step forwards on that here and will likely need a run or two after a year off.

Derek Duval, Maasai Warrior and Pinchpoint all need to improve considerably to figure.

Gary Moore also runs Quloob who was smart enough on the Flat and the betting will be interesting between his two runners.

All in all, Ecco will be a tough nut to crack but it's a raced best watched with your notebook than one to pop your hard-earned wonga on.

As the betting suggests this is wide open.

Grade 1-winning Novice hurdler Pingshou will likely head the market, but he's far from convincing, even if he could blow these away on some of his best form.

But he's nine now and hasn't taken to fences as well as Colin Tizzard would have hoped and now faces some younger horses starting out their chasing careers.

Two that look to have plenty of scope over fences are Paul Nicholls' Darling Maltaix and Harry Whittington's JAMMY GEORGE.

Darling Maltaix is a quirky sort and unless there is a solid gallop on he could blow his chances despite his undoubted talent lurking.

Jammy George has always screamed chaser and the booking of Daryl Jacob catches the eye for a stable that have had a few winners.

He'd be a tentative pick after a paddock pick just to double check he comes to Ascot in reasonable shape.

Joint top-weight Earlofthecotswolds didn't appear in love with the fences last time out but could well put that behind him for Nigel Twiston-Davies. He takes his racing well and normally runs his race.

Doctor Dex found this kind of mark hard work when entering handicap company last season and will need fences to help him improve.

On The Slopes could well be a player at juicy odds and Cervaro Mix also cannot be ignored.

The first big chase of the winter at Ascot is a good'n and a proper punting heat.

BALLYWOOD is certainly the one to beat dropped back in trip. If he arrives in good shape he could be tough to oppose.

He progressed at a rate of knots last season and is remarkably still only a five-year-old.

He was only beat once at this trip last year – by Graded winner Dynamite Dollars – and ran a career best at Ludlow when giving a Tom George horse two stone in a tight finish.

There should be more to come this year and the ground looks to be in his favour. If he returns in good order he should win this.

He won't have it all his own way by any stretch of imagination and unexposed Arkle fourth Clondaw Castle deserves a big mention.

He shot into Festival contention last spring and was supplemented for the big one by confident connections.

A fourth-placed finish is nothing to turn your nose up at this level and while it was a messy race he'd already proven in handicap company he could be smart.

The worry is he took a while to get going last season and Tom George isn't known for flying at this time of the year.

At a slightly bigger price Cap St Vincent is also of interest. Tim Vaughan has enjoyed a fine start to the season and this prolific winner doesn't look as his progress will stop just yet.

This is a huge step up but his mark doesn't look beyond him and he gets a stone-and-a-half from some of those at the top of the betting.

Caid Du Lin goes well here and will come on for his Chepstow run but looks a bit high in the weights for now.

The Last Day is completely unexposed but this is a big ask this early in his career.

Top weight Speredek has had a frustrating couple of seasons while still winning a big pot or two and despite the 11'12 could well go close here.

Another good betting heat, but by no means is it easy to pick apart.

We have the likes of the lightly-tried four-year-old Red Force One from Ditcheat and then course favourite and ten-year-old JOLLY'S CRACKED IT for Harry Fry.

Fry's runner scooted up on his belated comeback here last year and is only 2lbs higher here. He also dead heated in a stronger handicap off a pound higher back in his heyday.

If he comes here in good order – which the paddock and betting can guide – he looks a very tempting price.

The other that needs a raised eyebrow at a decent price is Didtheyleaveuoutto. He is very quick over his hurdles and this track will suit him if the race is run to suit.

Lisp has a massive chance for Alan King – who has won the last two runnings of this – but she may prefer a bit more dig in the ground and is short enough for that reason.

Four-year-old Adjali has to prove he is good enough in open company despite the Triumph form slowly but surely working out okay. He'd be very smart to win this first time out.

Gumball has some solid back form and Philip Hobbs has persisted with him longer than others may have. He could go well at a decent price.

One that has been completely forgotten is Jacamar for Milton Harris. He was a real eye-catcher at Chepstow and while still a frame of a horse won't mind any rain and looks on a handy enough mark. He is a huge price.

The feature is a cracker and a proper field have turned up again with Black Corton re-routing from the Charlie Hall to top the weights.

He's an admirable horse but giving a stone and half-a-stone to horses with plenty of racing ahead of them may be a big ask.

Vinndication finally gets his step up to three miles and with the forecast pretty miserable should also get his conditions.

Kim Bailey has his team well forward and decided against the Charlie Hall for his promising stayer.

He has already shown a liking for Ascot and you have to expect a big run from him. However, at the prices he can be left alone.

On The Blind Side could yet prove a level above most of these but is a fragile horse and may well need this from a stable that rarely has them fired up at this time of the year.

Mister Malarky is better than just a plodder but will have the Ladbrokes Trophy as his big aim rather than this. Colin Tizzard would rather his weight wasn't added to beforehand you'd have to think.

Looking at the betting AMI DESBOIS looks criminally over-priced and the more rain that falls the better.

He has a formidable record when fresh and provided they go a proper gallop here he could catch a few of these cold first time out.

He races off 10'5 and if he turns up here in A1 shape he could make a few of these look silly at huge odds.

If they go a dawdle, it will be me that looks silly however…

Springtown Lake has won first time out the last two campaigns and cannot be ruled out whatsoever. He is an inconsistent performer but this galloping track will be right up his street.

The closing bumper takes some sorting and it's impossible to find much of a betting angle pre-race.

The betting will be very important on the day as will a good paddock check. Look for those horses ready to run.

Of those with experience, LLANDINABO LAD looks a big enough price after his fourth on debut at Warwick.

That is proper form and at this stage he'd take preference over the likes of Felony who makes his racecourse debut for Nicky Henderson.

San Rumoldo carries a small penalty for his Southwell win and looked sharp enough there to be considered a decent bumper prospect.

But this is very much a play it by ear race to close the day and hopefully we'll already be rich enough to leave this alone come 3.55 on Saturday.