Steve Bruce is THE expert for taking teams up to the Premier League. 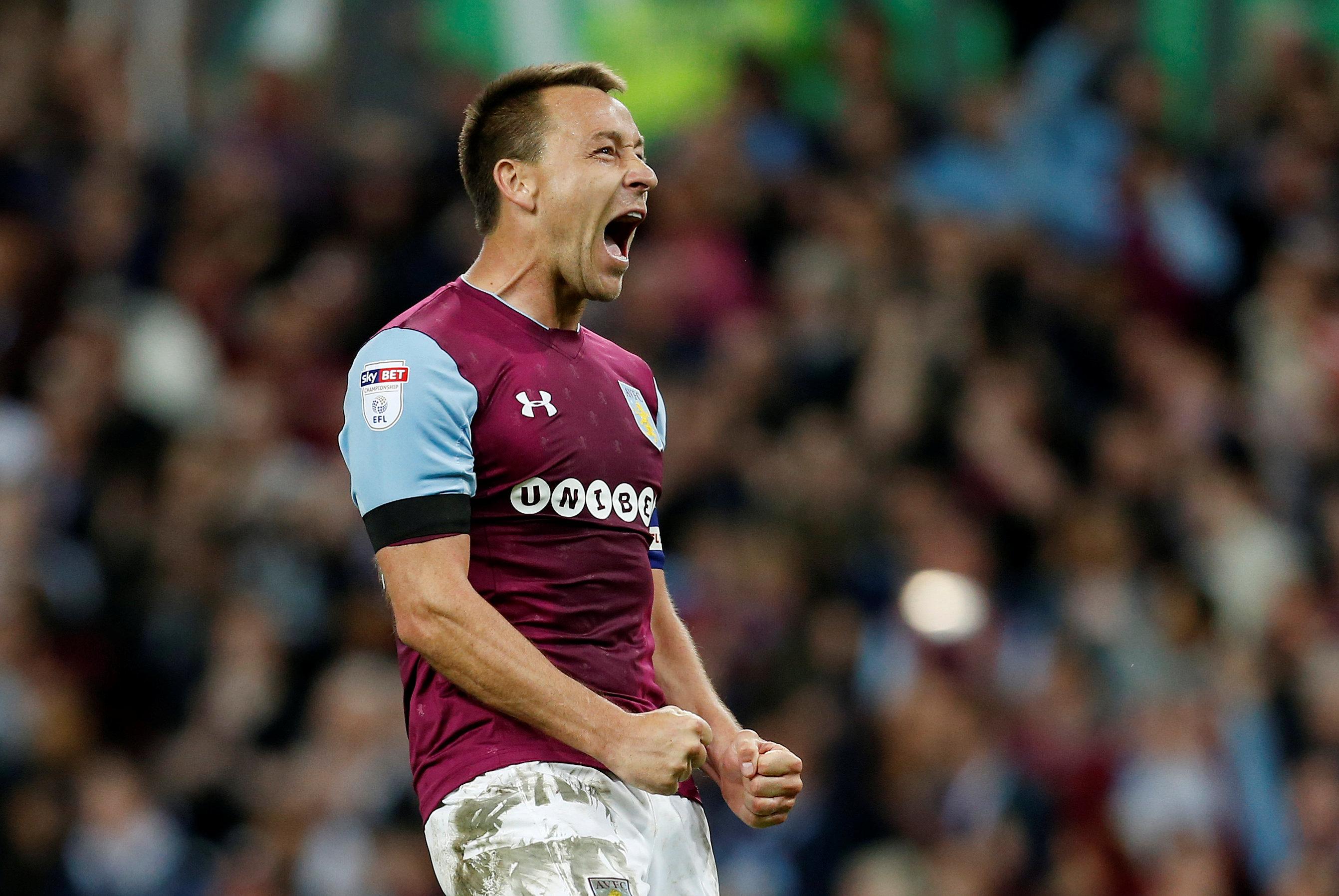 The 57-year-old has done it four times previously, twice with Birmingham and two more times with Hull.

Now, thanks to this tension-ridden, low-quality stalemate, a fifth opportunity to go up to the big league beckons – and the £175million bounty that comes with it.

Aston Villa will take on Fulham on May 26, 36 years to the day since their European Cup final win over Bayern Munich.

Boro could not overturn their first-leg deficit – though they came mightily close in the final minutes when ex-Villa star Stewart Downing crashed the crossbar with a free-kick. 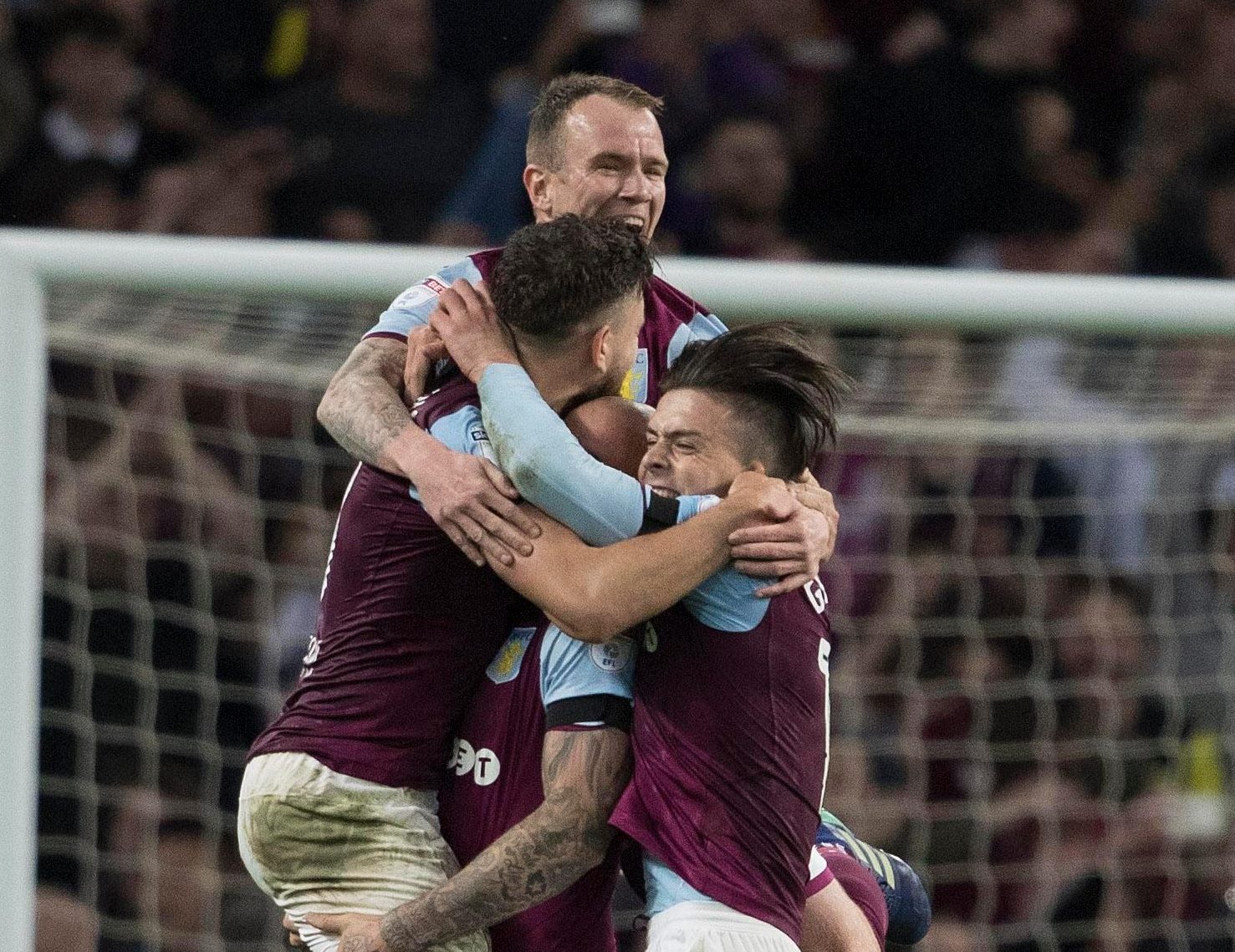 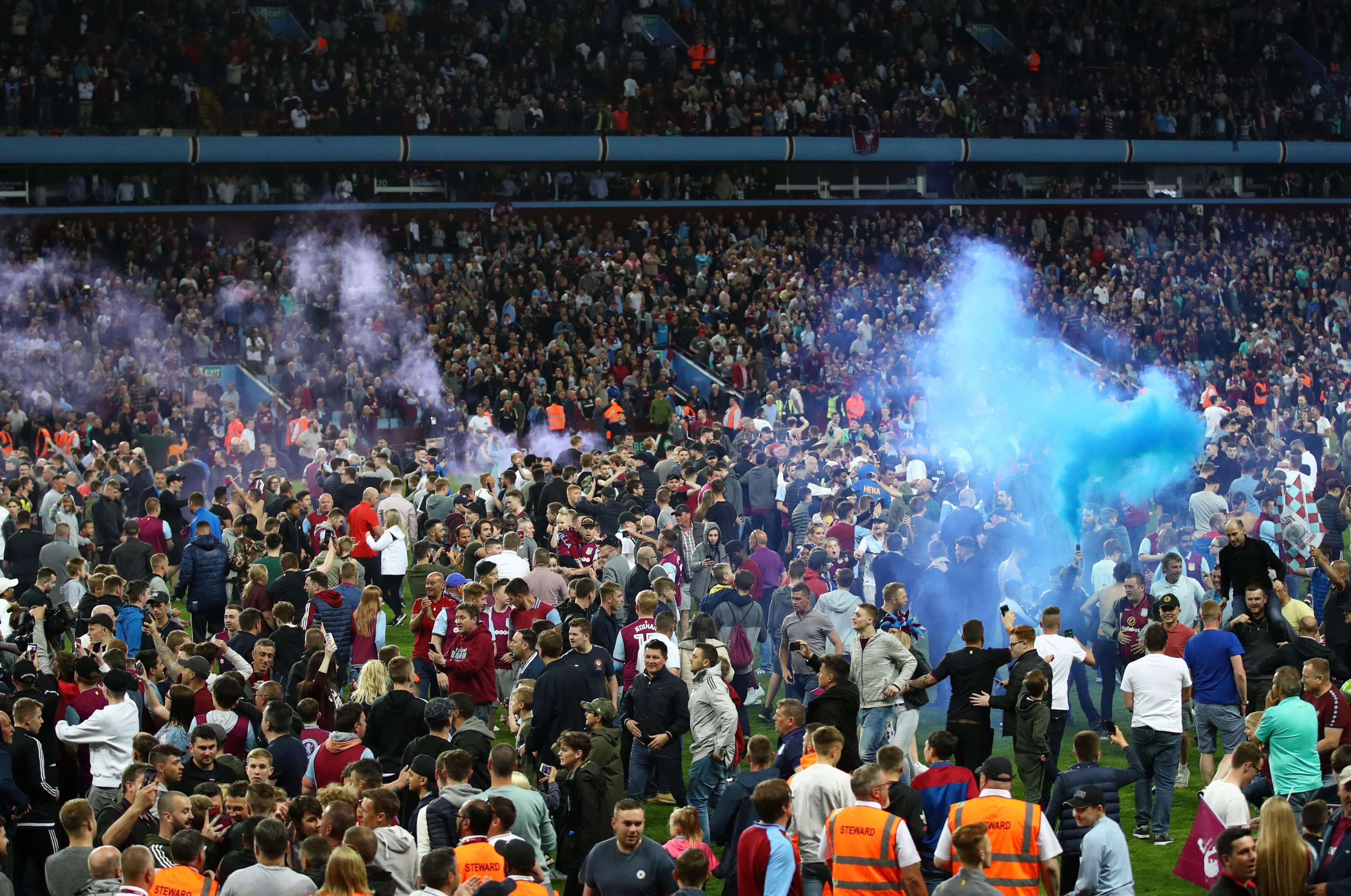 Death cast a shadow over the first leg with the recent passing of Steve Bruce’s parents and the Riverside appearance of former Boro goalkeeping coach Leo Percovich, who lost both his daughters in a car crash in December.

And sadly another tragedy struck on the morning of the second leg with the shocking news of Jlloyd Samuel’s death, also in a car crash.

Tributes poured in for the former Bolton defender, including from England’s official Twitter feed who recognised Samuel’s achievements for the Three Lions youth teams as well as his call-up to the senior squad in 2004. 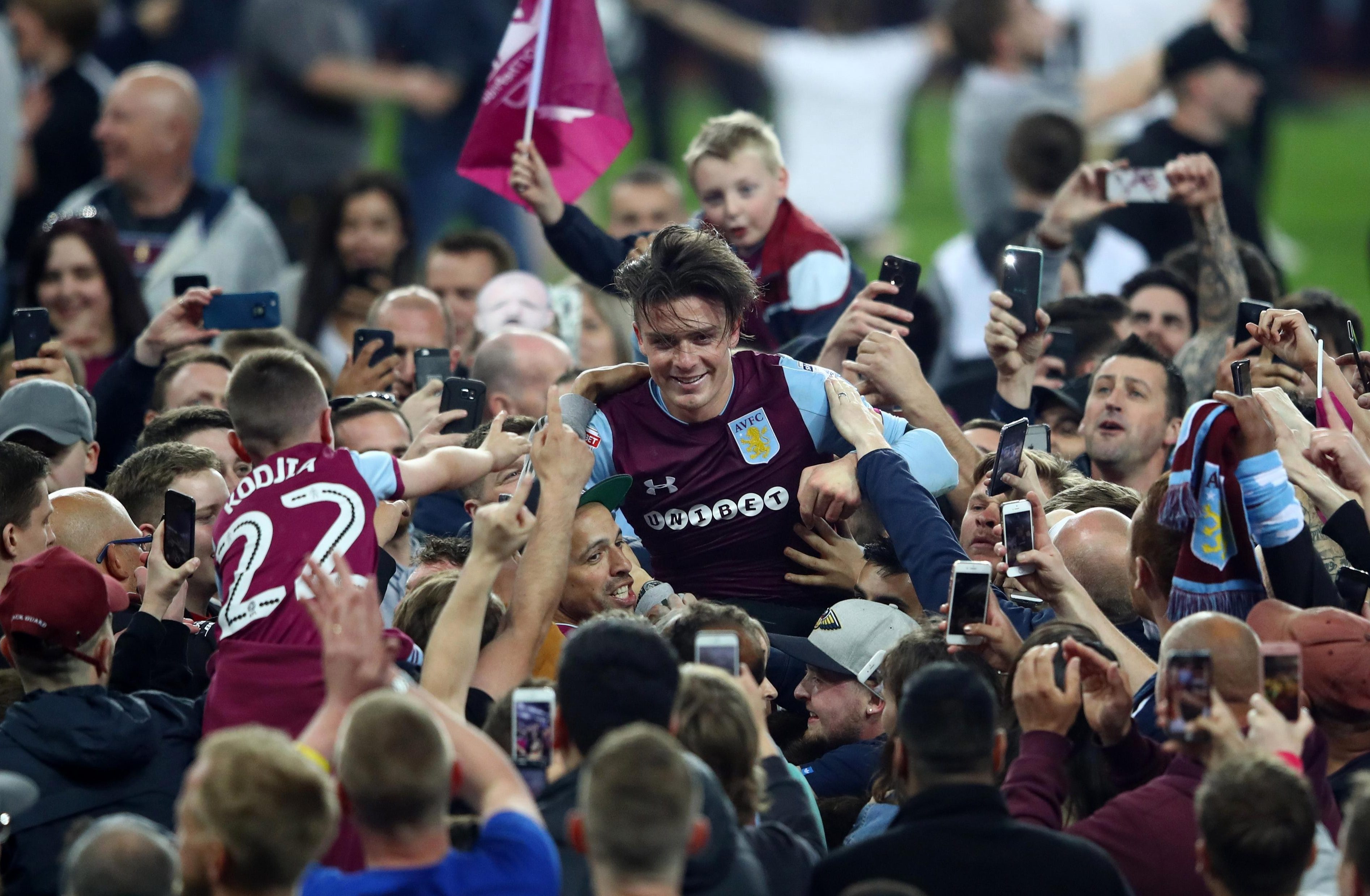 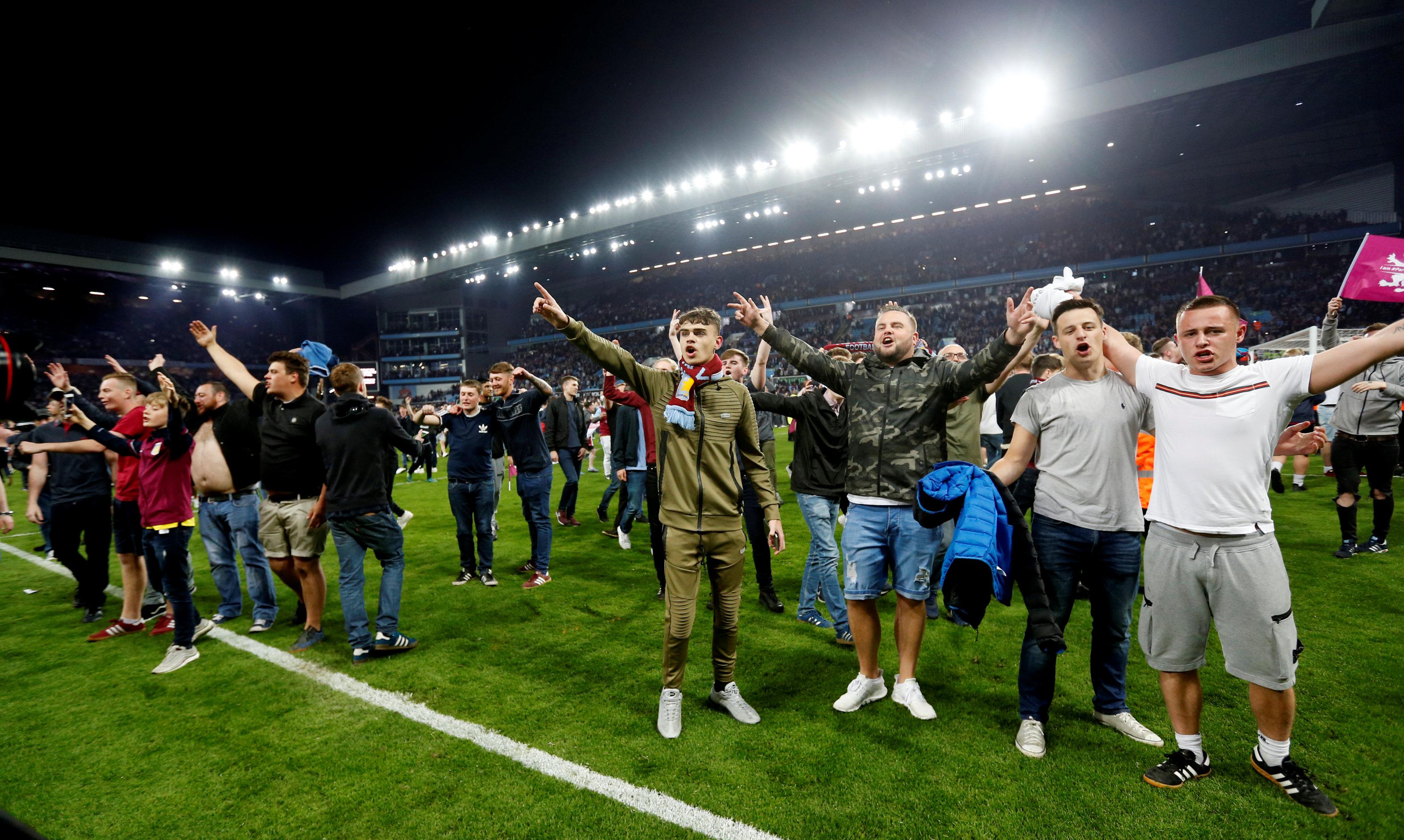 Villa players paid their respects by wearing black armbands, while the crowd honoured the Trinidadian with a minute’s applause.

In the last 12 meetings between these sides, the hosts had NEVER won.

That obviously included Saturday’s 1-0 victory for Villa at the Riverside, which came thanks to Mile Jedinak’s early header.

But Villa fans will have been wary of the weird record and the fact that Boro had already won at Villa Park earlier this term in the Carabao Cup.

When you think of the play-offs, you think tension, you think drama. This was certainly a bucket load of the former.

Villa looked anxious from kick-off and played large parts of the first period deep in their own half, as if it were the last ten minutes and they were hanging on for a result. 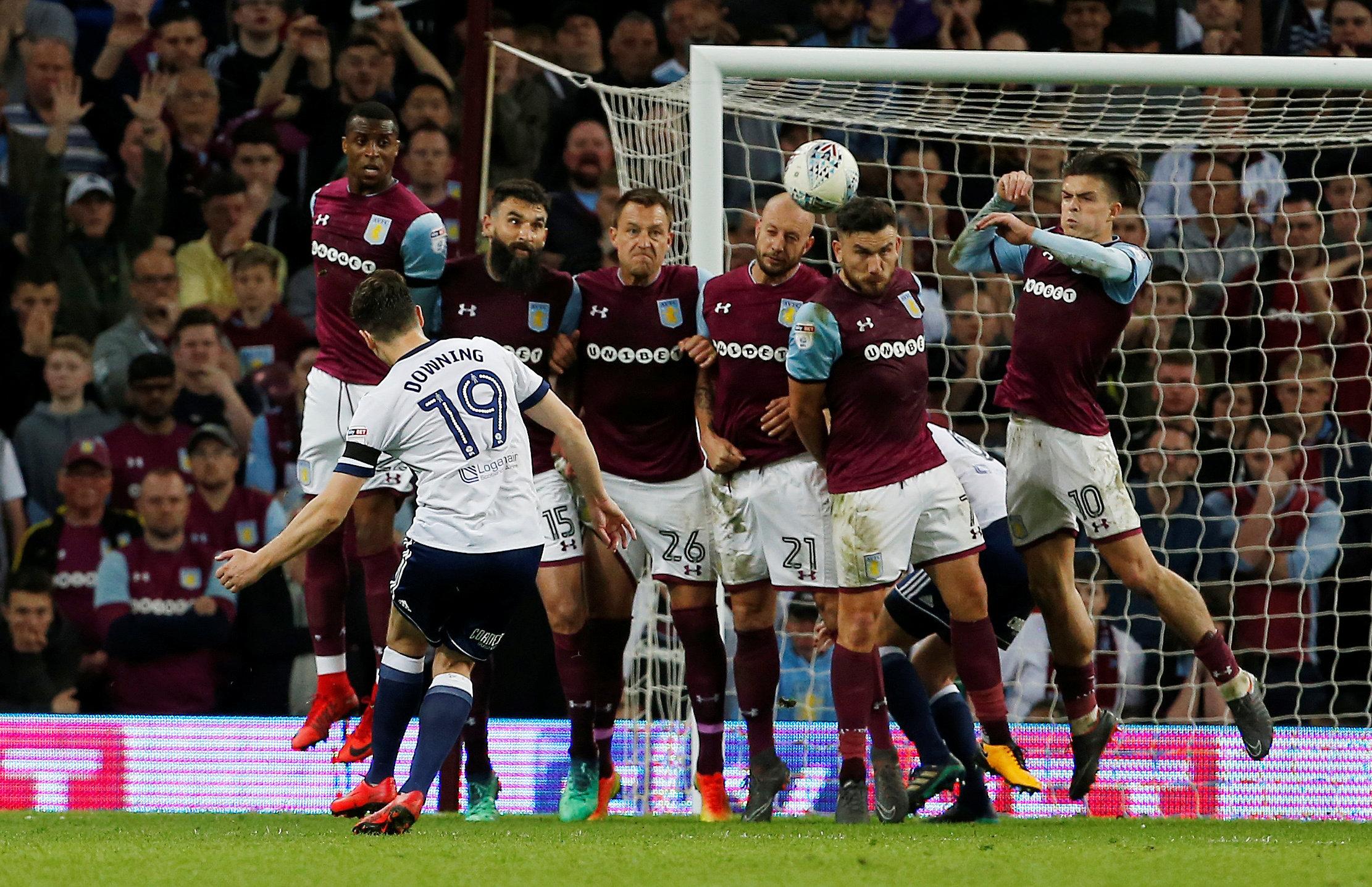 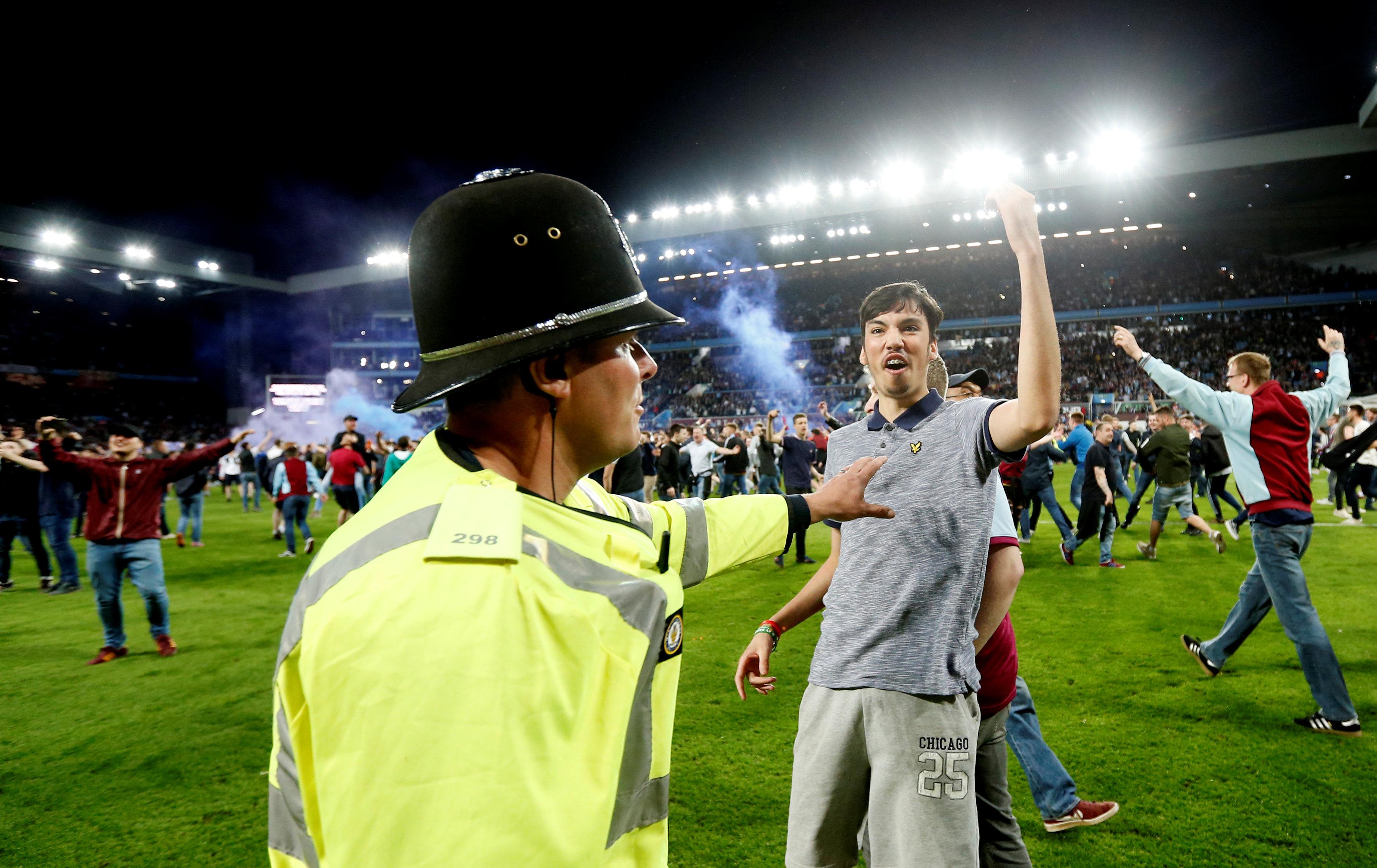 The only player who showed real confidence was Jack Grealish, whose rise back to prominence since returning from a kidney problem earlier this season has been a joy to watch.

The 22-year-old has played at Wembley already, having shone in the FA Cup semi-final win over Liverpool in 2015 before featuring in the final itself.

Grealish ran the show in the first leg, drawing praise from Bruce, and here he continued to attempt the difficult pass where others would shy away, often finding Albert Adomah down the left with a thread-the-needle ball.

It could have been game over on 34 minutes when Conor Hourihane looked set to score as stepped up to fire Adomah’s cut-back home from six yards.

But the Irishman was denied by a brilliant, brave tackle at the last moment from George Friend.

Four minutes later, James Chester let the visitors off as he fired wide from 12 yards.

Adama Traore, sold by Villa to the Riverside two seasons ago, has been Boro’s star man all season long. 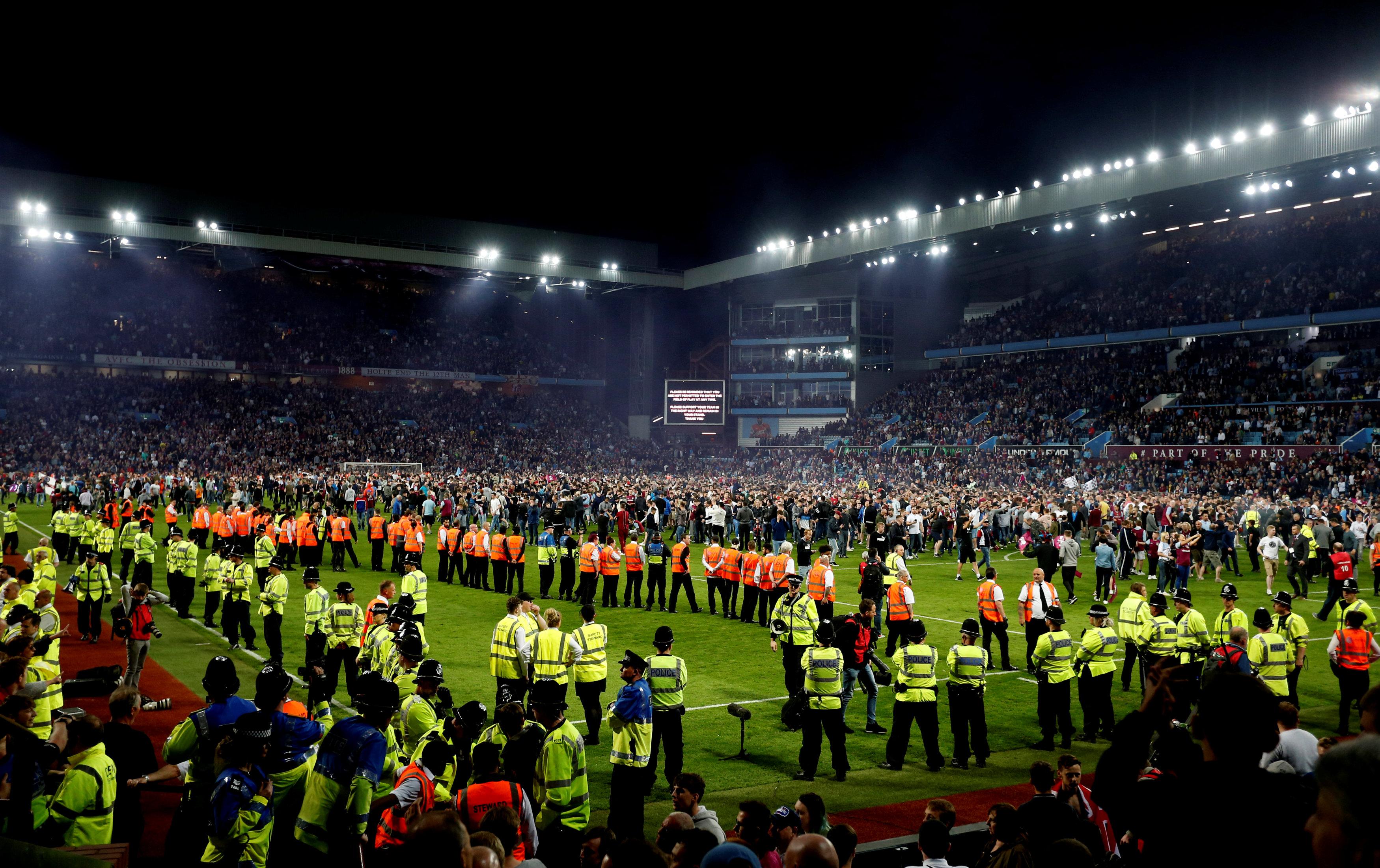 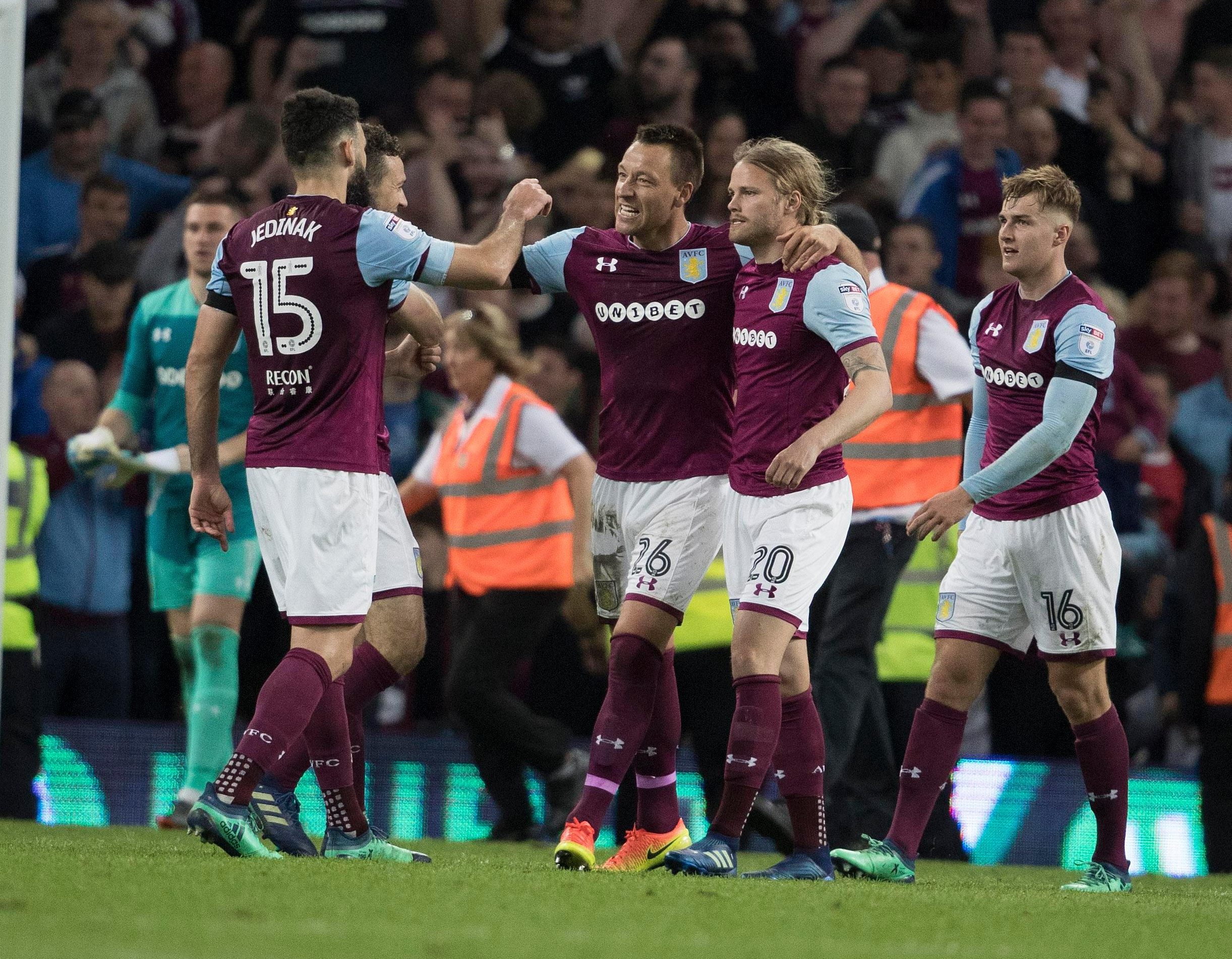 But the Spaniard was kept quiet in the first leg thanks to a committed performance from Alan Hutton – and the Scot repeated the feat here.

The nerve-shredding only worsened after the break as Boro threatened with Mo Besic driving wide.

Villa did have a brilliant chance to wrap it up on the hour as Adomah exchanged passes with Grealish and fired into the near post where Lewis Grabban lurked, but the Bournemouth loanee saw his close-range prod denied by Darren Randolph.

As the minutes wore on, Pulis had to change it and soon enough Patrick Bamford and then  Gestede, to a few boos, entered the fray.

It seemed as if a mistake or a wonder strike would be the only way the deadlock would be broken. 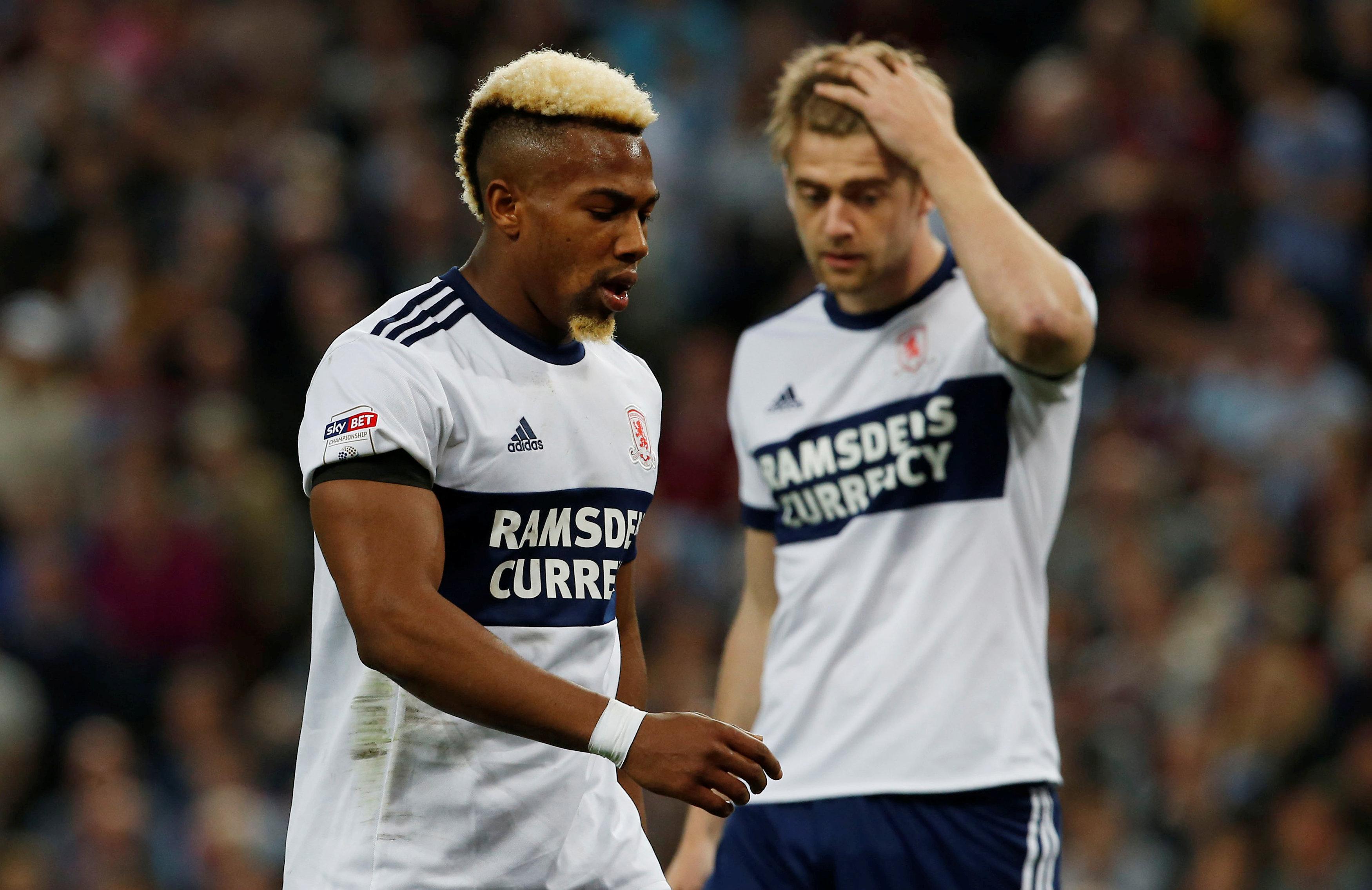 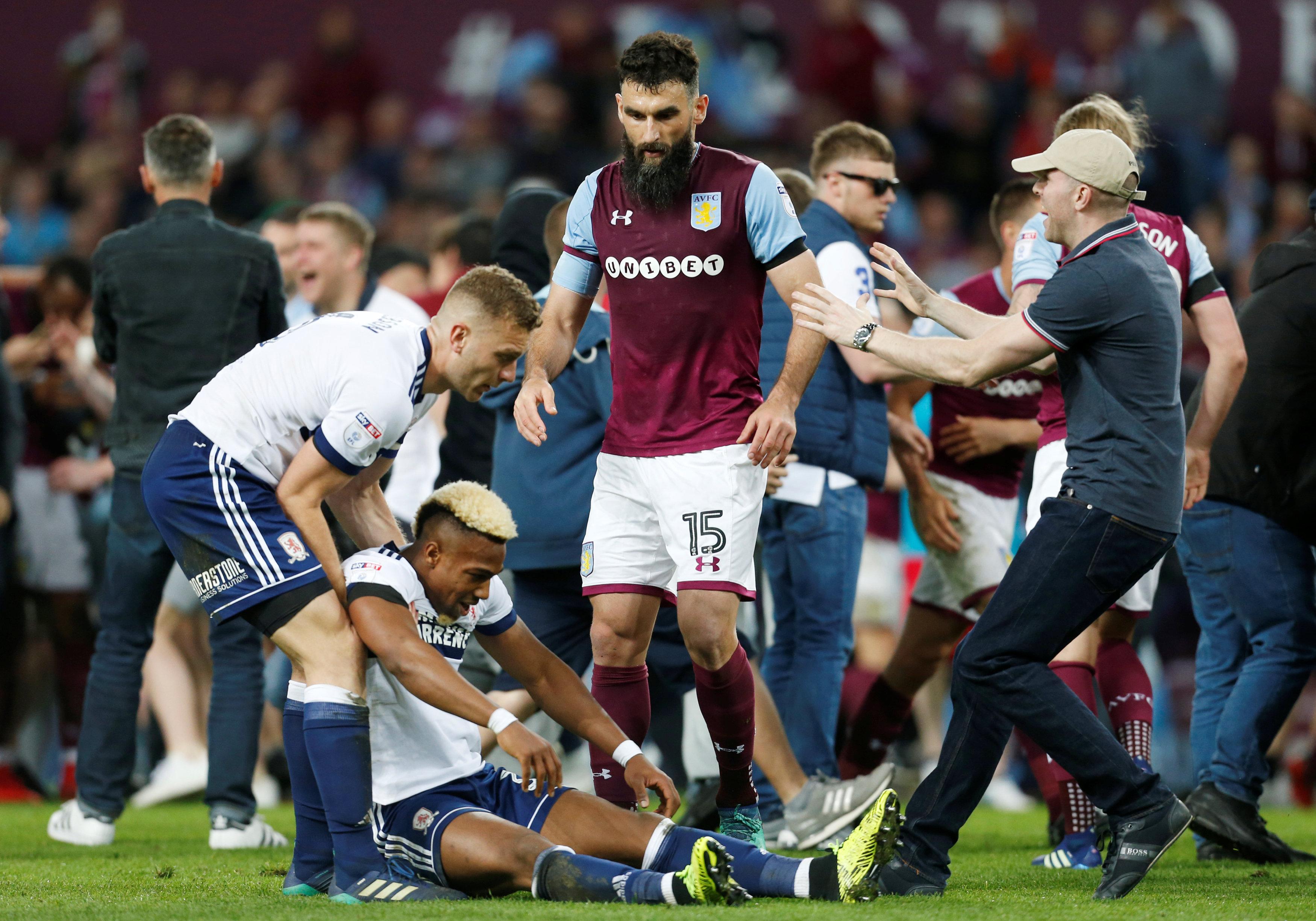 And Grealish almost did so with the latter with a 25-yard curler, only to be denied by the excelled Randolph.

There was to be late drama as Sam Johnstone handled Traore’s shot – which looked to be on target – just outside the box, but ref Mike Dean only booked him.

From the resulting free-kick, Downing walloped the bar and Villa fans breathed a sigh of relief, before many invaded the pitch at full-time.

It was not pretty and certainly nothing on the aesthetically-pleasing style of Slavisa Jokanovic’s Fulham.

But Villa are going to Wembley and with promotion expert Bruce at the helm, few would bet against them.