BIRMINGHAM, England — A spectator ran onto the field and threw a punch at the Aston Villa captain Jack Grealish’s head during a soccer match at Birmingham City on Sunday.

The incident happened less than 10 minutes into the game in the second-tier Championship when Grealish was in the Birmingham penalty area. The fan ran from behind Grealish and swung his right arm at the midfielder’s face, striking the side of his head.

“I was walking into position and then just felt a whack around the side of the face,” Grealish said. “Obviously there’s rivalry and stuff in football, but I don’t think there’s any place for that.”

A scary scene as Aston Villa's Jack Grealish was attacked by a Birmingham fan during the match. (via @espnfc) pic.twitter.com/d9lbfg6O6u

The intruder was quickly restrained by a stadium security official as several Aston Villa players rushed in to confront him. He was led away by the police, blowing kisses to the crowd as he left before being arrested.

“We apologize to Jack and all at Aston Villa Football Club,” Birmingham City said in a statement released after the game. “What happened has no place in football or society. Jack is a Birmingham lad and regardless of club allegiance should not have been subjected to this. There are no excuses.”

Grealish produced the ideal response: he scored the goal in the second half that secured a 1-0 victory for Aston Villa. Seconds later, he was booked for jumping into the stands to celebrate with the visiting Villa fans.

“I just tried to get on with my job,” Grealish said. “To score the winner was unbelievable, after what happened in the first half I think it was set up for it.” 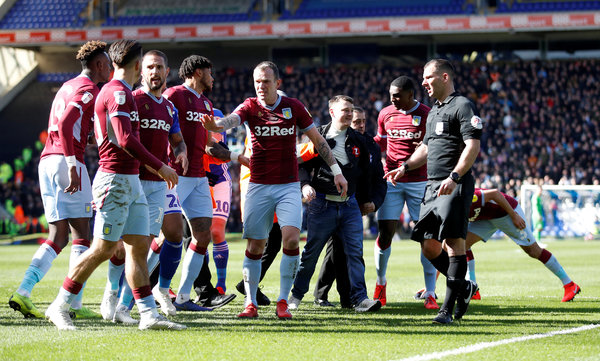 The English Football League, which oversees the Championship, said it “condemns the mindless actions” of the man who attacked Grealish.

“It’s a situation no player should ever be faced with,” the Football League said in a statement. “In all circumstances the playing surface is for players, not supporters and those playing in the game must be able to do so safe in the knowledge they will not be subjected to this type of behavior.

“Whilst this incident falls within the remit of the Football Association, we will work with all the relevant parties to address the issue of player and match officials safety on the pitch and ensure the appropriate action is taken.”

Precautionary measures had been taken already in an attempt to reduce the risk of violence at the match, one of the most heated city rivalries in Britain.

“We kick off on Sunday at 12 o’clock for a reason, to keep the people out of the pubs,” Villa Manager Dean Smith said. “Security’s got to be ready for people coming on to the pitch but then some lunatic goes on trying to make a name for himself.”

Birmingham said it would assist the authorities in their investigations and review stadium safety procedures.

“We deplore the behavior of the individual who committed this act and rest assured he will be banned from St. Andrew’s for life,” the club said. “The club will also support any further punishment this individual may face in the eyes of the law.”

The attack followed a number of recent high-profile incidents of crowd trouble north of the border in Scottish football.

In Friday night’s 1-1 tie between Rangers and Hibernian, the Rangers captain James Tavernier found himself face to face with a Hibernian fan who had jumped out of the stands. The previous weekend, a glass bottle was thrown from the same section of the stadium as Celtic wing Scott Sinclair prepared to take a corner kick against Hibs.