Birmingham: Here, in the NEC Arena, a netball match is being played in the middle of a nightclub. Supporters of all ages, of all genders, are busting moves to Titanium, the 2011 banger from David Guetta featuring Sia.

Between breaks in songs, the Australian Diamonds are playing Jamaica in a fiery final pool match that will determine who plays who in the semifinals. Their moves are even better than those being busted in the seats. 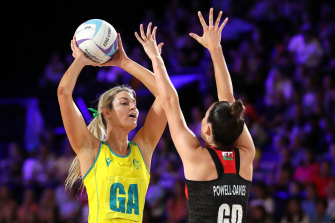 Gretel Bueta is the best player in the world according to many.Credit:Getty

At one end stands Jamaican goliath Jhaniele Fowler, feuding with defender Courtney Bruce like the Hatfields and McCoys.

At the other, Australian sharpshooter Gretel Bueta is living up to her reputation as the best player in the world, contorting herself into open space before scoring a goal.

When Jamaica’s Sunshine Girls overhaul the Diamonds in the final quarter to carve out an upset victory — their first against Australia at any Commonwealth Games — the roof almost comes off the arena as fans, players and officials celebrate.

Australia might have lost the match, but the scene on Thursday morning also illuminated the strength — and the future — of Australian netball.

Six members of the Jamaican team play in Australia’s domestic league, including Fowler, who first came to our shores in 2011.

Indeed, across the entire Commonwealth Games netball competition, teams are sprinkled with players from Super Netball.

“It’s the best league in the world,” Fowler says. “Playing in Australia has helped me so much and I like to bring that back to my team.”

Asked to confirm that she’s a seven-time Most Valuable Player recipient, she takes a step back and playfully rolls her eyes: “I ammmmm.”

The Diamonds have a battle on their hands if they’re to win gold at these Games, but there’s a bigger war being waged on the home front for control of the sport.

On one hand, it’s all sparkles: it has just under one million players in Australia, making it the No.1 sport for women, and it is pushing hard for inclusion in the 2032 Olympic Games in Brisbane.

On the other, there’s a crisis of confidence in Netball Australia to navigate the choppy course ahead as rival codes finally wake up to the potential of women’s sport.

“I don’t know where the negativity comes from,” NA chief executive Kelly Ryan tells the Herald and The Age. “It’s nothing that I’ll spend time thinking about because I can assure you that 90 per cent of the stakeholders want nothing but success for the sport. Hopefully, the other 10 per cent will embrace it.”

Reports surfaced in June about NA being “on the brink of financial collapse” as it struggled under the weight of crippling debt reportedly worth $11 million following two years of COVID-19 lockdowns.

“Absolutely not,” she said. “I don’t know how people came to that number to be perfectly honest. We had a $4.4 million loss to 2021, and we have $4.2 million in debt and $2.4 million of that debt is associated to the financial support that we gave all the states and territories in 2020 [during lockdowns]. We took out loans to keep the sport going.” 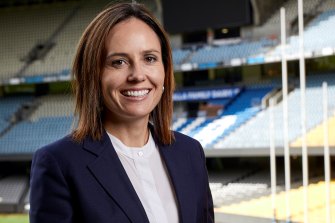 In the past month, a consortium, headed by Mental Health Australia chair Matt Berriman, has launched an ambitious $6.5 million bid to buy Super Netball, the domestic competition.

They are heavy hitters you would expect any code to welcome.

“We feel netball is at that juncture here in Australia, and we hope, whether it is our bid or a competitive one, that it continues to ensure netball is Australia’s No.1 female sport in Australia for decades to come,” Berriman said. “That has always been our motivation. We are actively and positively engaged with Netball Australia regarding our bid.” 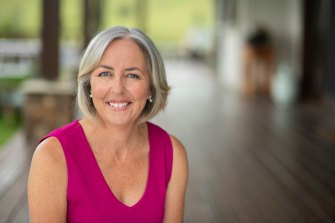 Diamonds legend Liz Ellis is among a consortium of heavy hitters looking to take over Super Netball.

Under the proposal, a copy of which the Herald and Age has seen, the bid offers to eliminate NA’s debt while also investing $2.5 million into development.

The situation remains delicate. Berriman on Tuesday met with NA chair Marina Go, the former chair of the NRL’s Wests Tigers, but Ryan is being kept at arm’s length from negotiations.

She refused to answer direct questions about Berriman’s bid and remained non-committal about private equity, which several sports and teams, including the All Blacks, have recently pursued.

“We’re delighted there’s interest, but it’s too early to go through the process,” she said. “We don’t have an opinion on whether private equity is the right thing for netball or not. We need to form that opinion before we start working out that particular arrangement. I don’t know enough about it. All I can do is look at what other sports are doing around the globe. It’s a process of understanding of all the sums of all the parts of netball, and not isolating one aspect of it.” 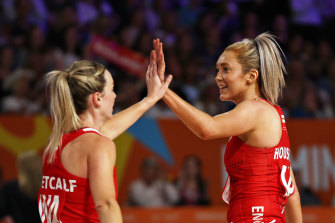 Australia next face an England side, featuring Super Netball alumni Natalie Metcalf and Helen Housby, in the race for gold at Birmingham 2022.Credit:Getty

What’s confused many stakeholders is the changing narrative about NA’s financial situation.

When last season’s Super Netball grand final between the West Coast Fever and Melbourne Vixens was sold to the Western Australia government, it was done so on the premise that NA desperately needed the funds. When reports surfaced about NA’s debt soon after, NA assured stakeholders the situation wasn’t at all dire.

“We put a stake in the ground for the grand final, we did a deal with the WA government, we had all the facts,” Ryan insists. “We’ve got debt — that’s our reality. But there’s also a reality about making this sport more commercial. The grand final is a prime example. It has not been positioned from a commercial-revenue driving position before. It’s been the opposite. That’s where our focus is: growing revenue. No part of our business is about cutting costs.”

Other fires are burning. NA is still nutting out collective bargaining agreements with the players’ association for the Diamonds and Super Netball players. Head office doesn’t seem particularly interested in a revenue sharing model.

But the grand final, which attracted a record crowd of almost 14,000 people, and a TV audience on Fox Sports of almost 250,000, shows there’s strong devotion to netball.

‘We’ve been No.1 in the world since the moment rankings came. But the sport hasn’t come close to commercialising what should sit with that.’

Which is important as all codes clamour for young participants.

According to NA, internal registration data for 2022 suggests participation levels are on track to match, if not exceed, those of 2019 before the pandemic.

“We’re competing with a lot of different sports,” Diamonds captain Liz Watson says. “AFLW, that’s becoming huge. We want to make sure we’re investing in our girls coming through. They need to see that’s our national sport and not lose them at 15, 16 years of age.”

There’s also an ambitious eye on inclusion at the Brisbane Olympics, although former AOC president John Coates has said the IOC prefers sports that can be played by men and women. Bids will be made in 2025 with an answer the following year.

Much like rugby sevens, it could attract a generation of women athletes.

Unlike other codes, particularly the Wallabies and Socceroos, the future of netball rests in the strength of its domestic league, not of its national team.

If Super Netball can replicate the nightclub-like scenes at the NEC Arena this week, with stadiums packed with fans having the time of their lives, you sense the code is going to be OK.

Gold medals never hurt, though. The Diamonds will play England in the semifinal on Saturday morning, local time.

“Does winning gold mean money falls from the sky?” Ryan says. “Definitely not. It doesn’t change where the sport is positioned: we’ve been No.1 in the world since the moment rankings came. But the sport hasn’t come close to commercialising what should sit with that. That hasn’t materialised. We need to tell the story of how good netball is.”

Get all the latest news from the Birmingham Commonwealth Games here. We’ll be live blogging the action from 4pm-10am daily.