At Kentucky Derby, ‘Sometimes You Win and You Lose All in the Same Race’

LOUISVILLE, Ky. — At first, after the 22 agonizing minutes, an awful purgatory that the owner of Maximum Security noted had accurately captured the “thrill of victory and agony of defeat,” he was more than gracious.

Gary West and his wife Mary — philanthropists, telecommunications barons, horse owners — watched as their colt splashed home on a soupy track beneath Churchill Downs iconic spires, bringing them the Kentucky Derby win that had eluded them for 40 years, before it was snatched away from them.

Three stewards, horse racing’s version of referees, had just ruled that when Maximum Security jumped a puddle it impeded the progress of a rival, War of Will, almost knocking the colt’s rider, Tyler Gaffalione, off his horse. That meant Maximum Security committed a foul and could not be declared the winner.

Later that evening, however, West changed his tune. He criticized the stewards’ ruling and left open the possibility of an appeal through racing authorities here or even in the courts. After all, for the first time in the history of the race, the horse who crossed the finish line first was disqualified for interference and stripped of his title.

“I think this is the most egregious disqualification in the history of horse racing, and not just because it’s our horse,” West told The Associated Press by phone Saturday night. 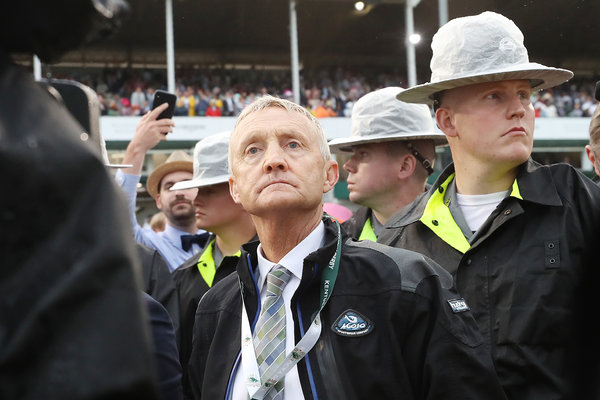 Reached by The New York Times early Sunday, West declined to comment about what his next steps might be. Maximum Security’s trainer, Jason Servis, was a no-show here Sunday. Can you blame him? He watched the greatest achievement of a knock around career taken away from him.

On Saturday night, Servis was numb, on Sunday morning he was simply forlorn. “For what it’s worth, I think my horse was the best horse,” Servis said via text message to Churchill Downs officials.

His colt heads back to Monmouth Park on the Jersey Shore on Monday, but neither West nor Servis were able to render a decision on whether Maximum Security would head to Baltimore in two weeks for the second leg of the Triple Crown.

“We haven’t even talked about the Preakness,” Servis said.

This is uncharted territory even in a sport that embraces rogues, put “Guys and Dolls” in the American lexicon and now faces an uncertain future after a spike in fatalities at Santa Anita Park this winter — 23 over a three-month span — left animal rights activists and many in the general public questioning if horse racing is too cruel and might be better off banned.

Even President Trump weighed in on Sunday, tweeting that the decision was “not a good one.” He wrote: “Only in these days of political correctness could such an overturn occur. The best horse did NOT win the Kentucky Derby — not even close!”

Bill Mott, the trainer of Country House, who finished second but was officially the 65-1 long shot winner of the 145th running of America’s famous race, was empathetic to West and Servis and all those horseplayers that had to rip up their winning Maximum Security tickets.

Sure, the Hall of Famer would have preferred his first Derby victory was run outright. But he continued to take the position of what is right is right, especially in these perilous times for the sport.

“I really believe that the call that was made yesterday really shows the integrity of sport,” Mott said. “It wasn’t an easy call, but if they let that go yesterday, I think it would have been much more talked about.”

The most interesting perspective, however, came from trainer Mark Casse, whose colt, War of Will, took the worst of the bumping and is lucky to have bounced out of the race healthy.

“As much as I want to win the Kentucky Derby, I feel like a lucky man today because I just got him out and jogged him and he’s perfect,” Casse said. “The horse racing world should be happy War of Will is such an athlete because not every horse doesn’t go down there.”

Even though Casse or Gaffalione did not file an objection about the incident, he knew Maximum Security was coming down.

“They had to take him down,” Casse said. “A lot of people said the best horse won, you know, maybe he did. But we would have liked the chance. Should he have come down? Absolutely. It doesn’t matter if it’s the Kentucky Derby or not. The horse put people’s lives in danger, he put jockeys’ lives in danger.”

So why didn’t he call foul? He and Servis are friends, he said. He respects the Wests. He loves the sport and, yes, there’s a code.

“If I claim foul, it ruins the biggest accomplishment in his life and the only thing that’s going to do is move me up to sixth,” he said. “Would you claim foul? No. Should Tyler have claimed foul? No. I stand by that.”

Now the question is whether the Wests will. When something happens for the first time in the 145-year history of America’s greatest horse race, the code of behavior can be a little unclear.