Memory has a tendency to smooth over the edges, to conceal the blemishes, to dust over the pockmarks. Hindsight can be distorted, and history with it: Knowing how something ended creates the illusion it was always going to end that way, a narrative reverse-engineered from the bare facts, happenstance prettified to look like destiny.

And so Real Madrid — the Real Madrid of Cristiano Ronaldo and Luka Modric, of Zinedine Zidane and Florentino Pérez — will be immortalized as the team that was champion of Europe for more than a thousand days, the first team since 1990 to repeat as European champions, the first since 1976 to win the European Cup three times in a row, the winner of four of the last five editions of club soccer’s most prestigious tournament.

It will be remembered as a team that built an empire and defined an era, a team that swept all before it right up until the point that a vibrant, fearless Ajax Amsterdam arrived at the Santiago Bernabéu and brought it all crashing down in one night, the Dutch team’s 4-1 victory in the last 16 on Tuesday sending Real Madrid out and shock waves around Europe.

But though the score line — the extent of the rout as much as the identity of the team that administered it — was eye-catching, the fact that it felt like an impossibility is, to an extent, a trick of the memory. 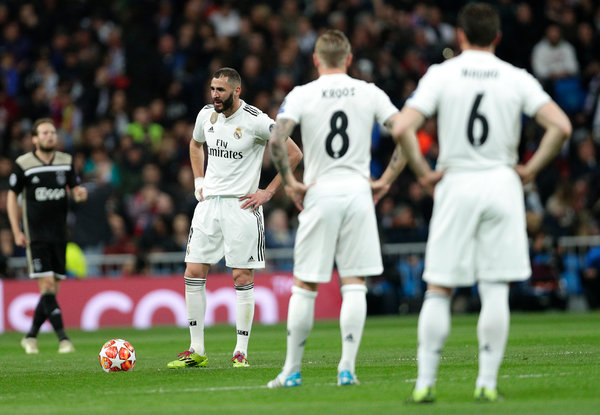 Real Madrid’s dominance of the Champions League has been more fragile than the trophy cabinet and history books make it look. Lifting the club’s 10th, 11th, 12th and 13th European Cups was not an inevitability, the manifest destiny of a club that thinks of itself as the king of Europe.

The best example is the first: Real Madrid was a few seconds from losing that final, against Atlético Madrid in Lisbon; only a 93rd-minute equalizer from Sergio Ramos took the game to extra time, and gave Real Madrid a reprieve.

But there are more, far more. In 2016, just a few months into Zidane’s tenure as coach, Real traveled to Wolfsburg for a quarterfinal. It seemed a favorable draw, as close to a gimme as the Champions League offers at that stage. Real Madrid was down, 2-0, within 25 minutes, and secured a place in the semifinals only in the 77th minute of the second leg, with Ronaldo striking a pose as he celebrated his hat trick. Real would win the tournament that year, beating Atlético again in the final in Milan, this time on penalty kicks.

The next year, its progress to the final in Cardiff was stately, serene, but that final hurdle was anything but. Real eventually beat Juventus, 4-1, but if that implies an overwhelming superiority, it did not feel like that inside the Principality Stadium. Indeed, for a time, after Mario Mandzukic had drawn Juventus even in the first half, Real Madrid seemed to be swaying. Its players would later admit that they needed to regroup at halftime.

And then last year, when Real almost conspired to throw away a three-goal lead against Juventus in their quarterfinal, edged past Bayern Munich in the semifinals thanks to a momentary lapse in concentration and ability from the stand-in goalkeeper Sven Ulreich, and then overcame Liverpool — and the even more hapless Loris Karius — in the final in Kiev.

None of that, of course, is to suggest that Real has ridden its luck, or to lessen the significance or glory of its triumphs, or to claim that what happened against Ajax on Tuesday, as the Bernabéu bypassed the rage it usually reserves for defeats and fell straight into grief, was only a matter of time.

Real Madrid deserves its place in history, and its most recent generation merits its reputation as a dynasty team, one perfectly calibrated in talent and temperament to excel on soccer’s most exalted stage. But that history does not need to be airbrushed, to have all trace of blemish surgically removed.

It has been tempting, these last few years, to see all of Real Madrid’s close shaves, its flirtations with disaster, as proof of inherent greatness: a team that knows exactly what to do to win, that always finds something more when it is required, a group of players whose gifts can guide them out of any situation.

That is true, too, though it is not the whole truth. What Wolfsburg and Juventus and Ulreich and the rest prove is that Real Madrid’s grip on the competition was not as viselike as it seemed. It was, at times, only the bounce of a ball away from being loosened entirely. What Ajax did on Tuesday Juventus might have achieved a year ago, but for one moment, one slip, one whistle.

Real Madrid does not have a divine right to win the Champions League. It was not carried to Lisbon and Milan and Cardiff and Kiev, and to constant glory, by its reputation or its aura or its history. It was carried by Ronaldo, his significance only highlighted by his absence, and his own refusal to countenance defeat, his desperate quest for greatness; and by Zidane; and before him by Carlo Ancelotti, and his subtle, shrewd, unspoken ability to elicit the best from the best.

Real Madrid could easily not have won four of the last five Champions Leagues. At times, it has been hard to explain — particularly in an age when soccer is enthralled by complexity, by philosophies and systems — quite how it has done so. Perhaps that is why it has been so easy to revert to thoughts of a special bond between this club and this competition, to start to believe in destiny. How easily it might all have come apart was illustrated perfectly on Tuesday, how fragile even the supreme can be. That it did not, for so long, is what this team will be remembered for; the picture will not be complete, though, without the pockmarks, the blemishes, the edges, ragged and rough.