At the Masters, Justin Rose Is an Outlier, and Establishes an Early Lead

AUGUSTA, Ga. — A golf course does not have feelings.

It would be the easiest way to explain the revenge Augusta National Golf Club exacted on the field in the first round of the Masters tournament on Thursday, after the course was routed by many of the same players last year.

Five months ago in November, a month when Augusta National is typically just waking from a good slumber, the world’s best golfers arrived to play the 2020 Masters, which was delayed by the coronavirus pandemic. The course was somnolent and unprepared, especially since it got good and sloshed by rain the night before the event began.

Golf’s elite took no pity on the venerable, if vulnerable, aristocrat of major championship golf courses. Dustin Johnson’s winning score of 20 under par was a tournament record, and 43 players finished the event under par.

Apparently, Augusta National has a good memory. In the first round of the 2021 Masters, the course was roused, ready and itching for retaliation.

When the last shot was struck on Thursday, Justin Rose was the outlier with a sparkling seven-under-par 65, which included six birdies on the back nine. That score put him in the lead, four strokes ahead of Brian Harman and Hideki Matsuyama who were tied for second after matching scores of 69.

But only 11 other players were under par, and Rose, Harman and Matsuyama were the only golfers breaking 70. Contrast that with the first round in 2020, when a tournament record 24 players scored in the 60s and a whopping 53 were under par. 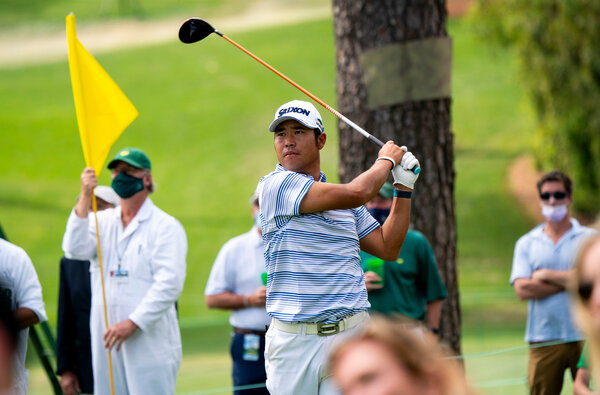 Perhaps the field should have been forewarned on Tuesday when Fred Couples, the 1992 Masters champion playing in his 36th Masters, said the Augusta National conditions were the most difficult he had seen in decades. Asked about the greens, which have been drying out all week, Couples said, “If they get any firmer, look out.”

The prophecy, aided by swirling winds, came to life on Thursday around the grounds. Jordan Spieth, a former Masters winner, was on a run up the leader board at the midpoint of his round until an errant tee shot on the par-4 ninth hole, followed by a recovery shot that ricocheted off a tree, eventually led to a three-putt and a garish triple bogey. Spieth rallied with an eagle on the 15th hole and consecutive birdies on the 16th and 17th holes, to finish with a one-under-par 71, which left him tied for eighth.

The reigning United States Open champion Bryson DeChambeau shot a four-over-par 40 on the front nine, then had an up-and-down final nine. His four-over-par 76 left him in a tie for 60th.

After his round, DeChambeau had a lament shared by golfers who have yet to master Augusta National’s subtleties, most notably having to hit approach shots from a downhill lie to an uphill green. Asked how often he sees such a shot on the P.GA Tour, DeChambeau answered: “Not very often, just at Augusta. That’s why I don’t have a problem anywhere else.”

Rory McIlroy, who needs a Masters title to complete the career Grand Slam of all four major golf championships, shot an eventful four-over-par 76. McIlroy not only had six bogeys, he also plunked his father, Gerry, in the back of the leg with a wayward second shot on the seventh hole.

The elder McIlroy appeared to be fine, walking away after his son’s golf ball caromed off him. Afterward, McIlroy said he was aiming at his father because he was standing in a good spot. Gerry McIlroy later joked that he wanted an autograph from Rory, which is a customary thing for a player to give a fan who is struck by a shot.

“I think he just needs to go and put some ice on,” Rory said, referring to his father with a grin. “Maybe I’ll autograph a bag of frozen peas for him.”

Rose opened his round with a one-under-par 35 on the front nine but then blitzed the closing holes with birdies on the 10th and 12th holes, two of Augusta National’s biggest challenges. Rose birdied both par 5s on the back nine, as well as the par-3 16th and daunting par-4 17th hole.

His performance was especially impressive because he had not played a competitive round of golf in a month, having withdrawn from the Arnold Palmer Invitational in early March with a back injury. In the end, the layoff may have been beneficial in a variety of ways. For one, it lowered Rose’s expectations for the Masters, something he acknowledged on Thursday evening.

“You can just run off instinct a little bit,” Rose, the 2013 United States Open champion, said. “Obviously I’ve competed in these big tournaments quite a few times, and I’ve got one of them to my name, but we’re looking for more.”

He also used the time off to spend more time working with his old swing coach Sean Foley, who Rose reunited with late last year. The two first began working together in 2009 and had a brief, recent separation, which is common in the golf world.

“Everything I’ve achieved in the game of golf I’ve done it with Sean by my side,” Rose said, adding: “I was tailing off a little bit with my own game through 2019, and I think the lockdown, just being left to my own devices for a little bit too long was probably not a good thing.

“So it’s great to be back with Sean, and I trust him implicitly. He knows what works for me and my game.”

Four players were five strokes behind Rose at two under par: Patrick Reed, Webb Simpson, both former major champions, and Will Zalatoris and Christiaan Bezuidenhout.

“With how difficult it was out there today, with how firm and fast this place played, and the wind picking up,” Reed said. “I’ll definitely take a round of two under par. ”

“Guys are going to shoot themselves out of the golf tournament on Day 1 in these conditions,” he said. “I knew it would be tough today, but I didn’t know we’d be dealing with gusty winds like we were. So I’m very happy with my score.

“I think it’s been five years at least from last time I remember it being this firm, this rough. But it’s fun, too. This golf course is more fun this way because you really have to think, you really have to use the slopes. Otherwise, you can put yourself in some really bad spots.”