At the P.G.A., Bethpage Black Has Everything Except Much Water

More than 200,000 fans are expected to attend this week’s 2019 P.G.A. Championship at Long Island’s Bethpage State Park Black Course, and each will be permitted to bring one unopened water bottle to the event. There will also be sprinklers embedded in the grass to irrigate the fairways, miles of spray hoses used by maintenance crews and, according to the weather forecast, rain showers that might create temporary puddles in the parking lots and walkways.

There will be water everywhere except where fans would most expect it — in play on the golf course.

While the feared Black Course is among the most daunting tests in major championship golf, the layout is nearly devoid of the usual streams, creeks, lakes or other water hazards typically featured at a golf course. On the Black Course’s 180 acres, there is one: a 6,000 square foot pond about the size of a community swimming pool.

The lonely pond, on the 210-yard par-3 eighth hole, is home to bullfrogs, goldfish, turtles and red-winged blackbirds. It is also as far from the course’s main entrance and clubhouse as a visitor can walk on the grounds. But if the solitary Black Course water hazard is secluded, it is by no means unimportant.

It could be, in fact, one of best, if overlooked, places to gather during the event. Hills enveloping the green create a kind of natural amphitheater for viewing the entire hole. Moreover, it is a cherished spot on a public course renowned for twice hosting the United States Open this century.

In that way, the eighth hole’s pond might not be lonesome at all but downright chic, as well as a crucial potential trouble spot this week for the world’s best golfers. A tee shot that lands just short of the green there will roll down a bank and into the pond.

“Water is the only ultimate hazard for the pros,” said Rees Jones, the course architect who led the restoration of the Black Course in the late 1990s, which included bringing the front of the green closer to the hill next to the pond. In an interview last week, he explained that elite golfers are so proficient at extricating shots from sand that they generally do not worry much about ending up in it.

“But landing in water is a penalty stroke,” Jones said. “So restoring the threat of the front hole location was paramount.” 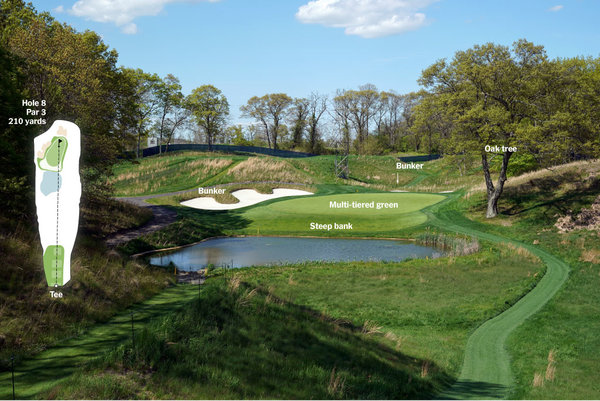 The workers whose job it is to tend to the pond and the hole year-round carefully ward over it.

“Whenever there’s a big storm overnight, we make sure we head out to the eighth hole to have a look,” the Bethpage head superintendent, Andrew Wilson, said. “Just to check that things are O.K.”

The pond was strategically placed in the original Depression-era design of the course by the golf architect A.W. Tillinghast, who used the property’s single significant body of water to create the long, forced carry from tee to green. It was a challenging shot, one made that much more daunting when the flagstick was placed near the front of the green about 10 yards from the pond.

“People love par-3 water holes,” Jones said. “There’s the challenge. There’s the visual. The whole hole is in front of you. It’s a defining setting in golf.”

But across several decades of play, including tens of thousands of rounds by recreational golfers, many of the distinguishing features of Tillinghast’s layout were obscured by overgrowth or erosion. The eighth green, for example, shrank dramatically, and a receding green meant that the taxing front-hole location near the water was no longer an option.

But in the 1990s, in an inspirational nod to the everyday golfer, the august United States Golf Association decided to bring its featured event, the United States Open, to that bastion of the weekend duffer: the muni, a term for a public course owned by a town, county or state where the golfers change their shoes in the parking lot and the door is open to all.

It was a noble experiment, but the Black Course, where some fairways had become no more than random tuffs of grass, sorely needed a refurbishment. The yearslong restoration that Jones shepherded began in 1997.

When it came to the eighth hole, the first thing Jones sketched for his renovation was not so much an overhaul as a repair — he would extend the green back toward the water. Today, it is again 10 paces from the hole’s famed pond.

Jones also built a new elevated tee and added a plateau — “a terrace,” he called it — to the back of the green. When the flagstick is on that additional tier, the hole can require a considerably lengthier tee shot and play one-to-two clubs longer than it does when the pin is positioned near the pond. Jones also re-contoured the bank in front of the green to make it steeper.

The grass on that slope has recently been cunningly mowed very short to ensure that any tee shot landing on the bank rolls back into the pond.

That was not the case when the Black Course hosted its last PGA Tour-level event, the 2016 Barclay’s tournament. Eight tee shots hung on the edge of the pond in four rounds, although another 11 balls were deposited into the water. Overall, the average score on the hole was 3.188. Seventeen golfers made double bogey — or worse.

“It’s a tough hole and the elevated tee plays a factor as well because you’re high up there and it exaggerates any wind you’re feeling,” said Kerry Haigh, the chief championships officer for the PGA of America. “Once on the green, it continues to be a tough test because there is a lot of slope to contend with.”

Put it all together and eighth hole, with its signature, peaceful pond, has long been the Bethpage insider’s secret and one that the course’s caretakers want to be sure to maintain.

Chief among the concerns is whether the sprawling, exposed, old oak tree next to the eighth green might topple into the pond during a storm.

In the first photographs of the Black Course when it opened in the mid-1930s, the pond is plainly visible, but there were no trees near it. Now it is impossible to consider the picturesque vista without pond and tree.

“We watch over the tree with a lot of care, pruning dead wood and doing what we can to keep it healthy,” Wilson said.

There are two deep bunkers filled with bright sand that add contrast to the multicolored panorama — hazards that make the shot from the tee more devilish as well. On the left of the green there is a massive serpentine swath of sand. Behind the putting surface, there is a smaller sand trap that was rediscovered during the restoration.

“Although the only thing we usually need a rake for in that back bunker is footprints left behind by foxes,” Wilson said.

The pond, though, has had all kinds of practical uses over the decades; the course’s work crews sometimes ice skate there in the winter.

“Where else would they go?” Wilson asked. “We’ve got almost eight acres of bunkers on the Black Course but just one pond.”

During tournament play it is a serene spot away from some of the biggest crowds, said Wilson, who has worked at Bethpage State Park since he was in high school.

“There is a concession stand there. You can sit on the hill to the right or behind the green. There a lot of colors — some nice broom sedge grass — and tree swallows flying around. Sometimes we get a heron there. There’s a lot to take in.”

And at the Black Course, a one-of-a-kind hole. 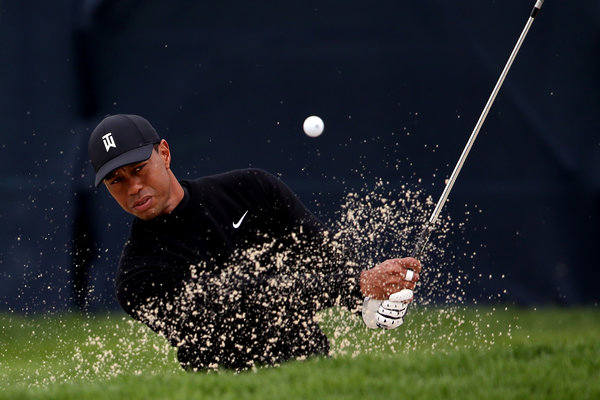 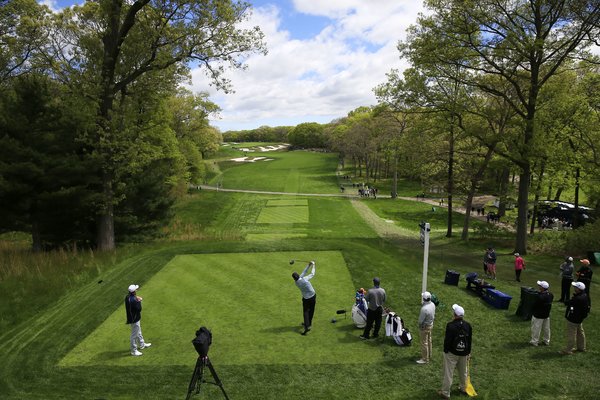