HOUSTON — The honeymoon began, as so many do for golf-obsessed newlyweds, with 18 holes.

The skies were blue, the sun was warm and the Spanish moss hung from the oak trees like nature’s tinsel, draping the scene in tranquillity. What better way to officially launch a shared lifetime of come-what-mays than as competitors at the 75th United States Women’s Open?

For Alena Sharp, 39, a soft-spoken Canadian, and her U.S.-born caddie and wife, Sarah Bowman, life in the cumulus cloud that is 2020 has come with a powerful ray of light. Sharp’s first-round four-over 75 at Champions Club’s Cypress Creek course was the couple’s first competitive appearance since they were married in the backyard of their Arizona home on Nov. 23.

The ceremony was officiated by their therapist. As part of their vows, exchanged in front of nine witnesses and more than 100 virtual guests from around the world, Sharp commended Bowman’s positivity and her personality, which she said “shines bright all the time.” And Bowman complimented Sharp’s grit, determination and resiliency.

For a union sealed in the middle of a pandemic, there are worse qualities to bring to the table than positivity and resiliency.

Bowman said: “People always talk about meeting someone that makes you want to be better in every way, and I always thought that was so stupid, but then I met Alena. And I can’t believe I’m saying it, but it’s real. She honestly makes me feel that way.”

From Sharp came a barely audible, “Thank you.”

Sharp and Bowman met in the face-off circle at a Chandler, Ariz., ice rink in 2013. They were opposing centers in a women’s recreational hockey league game.

“She’d always win them,” said Sharp, who exacted her revenge with some well-executed forechecks.

“She laid me out a few times,” Bowman said.

Sharp played hockey as a child and turned to it to as an adult to escape her overactive golf mind and its constant churn of negative thoughts. Bowman, 44, a one-time competitive skier from Pittsburgh, was looking for an escape from her work at a neuro-oncology lab where she was laying the foundation — or so she thought — for a doctorate in psychology.

Aware that Sharp was a professional athlete, Bowman initially misread her shyness as arrogance. “I thought she was full of herself,” said Bowman, who realized how badly she had misread Sharp when they met for a mountain bike ride.

Their friendship deepened in 2014 after Sharp found herself in between caddies. On a whim, she asked Bowman if she’d fill in at a local event on the Symetra tour, the L.P.G.A.’s minor-league circuit. Bowman recovered from an inauspicious start, leaving a crumb-like trail of clubs that spilled out of the bag as she proceeded down the first fairway, to help Sharp to a two-stroke victory.

They already were dating, but within months they became partners professionally, too, but only after they made a pact. “We said that if the working arrangement ever affects our relationship, I’ll find another caddie,” Sharp said.

They have had no regrets. They have traveled the world together and been Olympians together. They represented Canada at the 2016 Games in Rio de Janeiro and are looking forward to competing in the delayed Tokyo Games next summer. 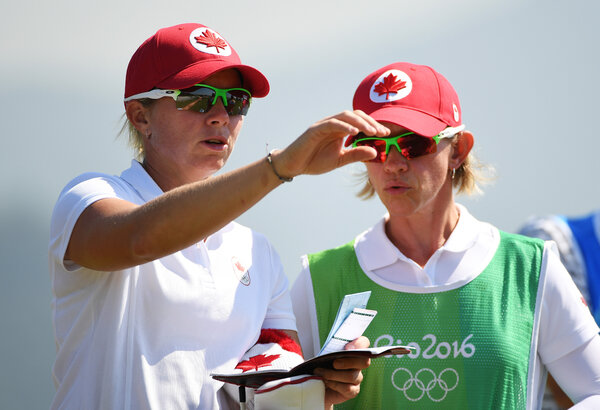 Bowman’s greenness as a caddie when she started out forced Sharp to take ownership of her game and trust her instincts. Bowman was a quick study, progressing lickety-split from not being able to watch when Sharp putted because she was so invested in the outcome to reading the greens for her.

The 99th-ranked Sharp, who joined the L.P.G.A. in 2005, has 14 career top-10 finishes. She is still searching for her breakthrough victory, though not for any lack of physical skills. Her talent has never been called into question, except by Sharp, who is quick to doubt herself.

That’s where Bowman is at her best. No one is better at reading Sharp’s mind and recasting the negative thoughts.

“We can say things to each other that I would never say to another caddie,” Sharp said. “I can tell her, ‘I just don’t trust myself right now.’ Or ‘I’m not confident.’ I feel like I can be totally vulnerable out there.”

Sometimes when things are going sideways on the course, Sharp will become so emotional her eyes will fill with tears. When that happens, Bowman will remind her that golf is what Sharp does, not who she is, and that no matter her score, she is abundantly loved.

“It’s good to be able to get those emotions out when I’m feeling not great and I’m not being nice to myself,” Sharp said.

After seven years of dating, the couple decided to get married and planned their wedding in three short weeks, their sense of urgency spurred by the seating on the Supreme Court in late October of Justice Amy Coney Barrett, a conservative who alarmed L.G.B.T.Q. advocates at her confirmation hearing when she declined to say whether the court’s landmark ruling in 2015 allowing same-sex marriage was correctly decided.

“Her nomination was really the driving force,” Sharp said.

Barrett’s use of the term “sexual preference” during her confirmation hearings particularly pricked the ears of Bowman, who has never considered her sexual orientation a matter of choice. As a young adult she said she contemplated killing herself, so great was her struggle to accept her identity.

In one of the wedding photographs the couple posted on social media, they are walking up the aisle, toward the camera. Each is wearing a gown pulled from the racks of a bridal-store chain. They are holding hands, crossing under an honor guard arch composed of golf club irons, though the salute is easy to miss at first, so blinding are their smiles.

Sharp and Bowman almost cry when they look at the joy radiating from their faces in that photograph.

Her voice cracking, she continued. “You just hope that enough kids who are going through what I did see this and see that you can move on. You hope they hang in there long enough to get past that.”