KENOSHA, Wis. — At an annual banquet last March to celebrate the achievements of Tremper High School’s cheerleading squad, some parents did a double-take when the coaches announced several unconventional awards.

There was the Big Boobie award for the girl with the biggest breasts. The coach giving the award, according to several parents among the 100 people in attendance, made a joke that the girl risked a concussion when she ran because of her “enormous boobs.” There was a Big Booty award for another girl. In a video from the event, held at a local catering hall, the coach presenting the award said: “We love her butt. Everybody loves her butt.”

The String Bean award went to a freshman who, as the Tremper cheerleading coach Patti Uttech later told school administrators, “was so light and skinny.”

Over the past year, cheerleaders have been calling out the poor treatment they say they face in the sport, with the spotlight focused primarily on women in the N.F.L., who have sued teams accusing them of discrimination, harassment and hostile work environments.

The ceremony in Kenosha, a town of about 100,000 people about 50 miles north of Chicago, showed that high school cheerleading squads are not immune to harassment. And Tremper is not the first high school where complaints of inappropriate behavior have come up. In October, a high school coach in suburban Cleveland resigned after a cheerleader accused him of making fun of her for being overweight and forcing her to wear a uniform that was too small as punishment.

The mock awards at Tremper, which coaches described as good-natured teasing but left a number of parents and teammates appalled, have drawn the scrutiny of the American Civil Liberties Union, which on Tuesday sent Kenosha Unified School District a formal warning that it might sue, saying that it had “failed to take any meaningful corrective action” in the case.

The coaches, the A.C.L.U. said, had continued to make inappropriate comments to the girls, including using “harassing language towards cheerleaders during practices.” It said the district was enabling sexual harassment and in doing so was violating federal nondiscrimination and equal protection laws.

The A.C.L.U. asked the district to appropriately discipline the cheerleading coaches and to institute mandatory anti-harassment training for all district employees. If the district refuses and does not take steps to enact policies safeguarding the girls, the organization will consider all options, including filing a lawsuit, said Emma Roth, a lawyer for the A.C.L.U. Women’s Rights Project.

“It’s so important that we intervene at a young age and girls are taught their worth and are treated equally,” Ms. Roth said. “When that doesn’t happen, they carry this message for the rest of their life.”

Tanya Ruder, a spokeswoman for the school district, said in an email Monday that “a clear expectation has been set that awards of this nature are not acceptable and are not to be given at Tremper cheerleading banquets going forward.”

She added, “As far as the investigation, we are not at liberty to share personnel matters.”

It is not the first time the A.C.L.U. has confronted the district.

After a contentious fight with the organization, the district only recently dropped a dress code policy that barred girls from wearing yoga pants, leggings and tank tops and then, the A.C.L.U. said, selectively enforced it. The school district also pulled a video from a high school health class last December after parents complained it insinuated female victims were to blame for sexual assaults.

In the case of the cheerleader awards, the parent of a cheerleader went to the A.C.L.U. after feeling dissatisfied with the response from administrators.

None of the cheerleaders who received the awards were available for comment to The New York Times, but a current cheerleader said in an interview that the girls went along with the jokes because, “What else were they supposed to do?”

Some parents were stunned.

One mother said: “I looked around and thought, ‘Did that just happen?’ If my daughter would have won one of those awards, I would’ve absolutely been rushing the stage. It was just so wrong, in so many ways.”

The cheerleader and the parents interviewed requested that their names not be made public, out of fear of retribution from the coaches. 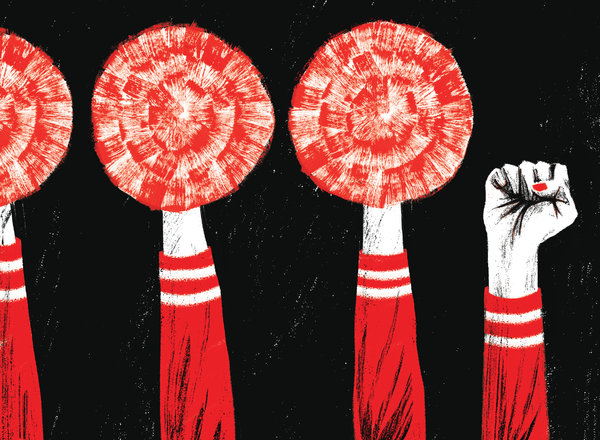 At least four people, including a track and field coach at the school, reached out to Tremper’s principal, Steve Knecht, and school district administrators to complain about the awards. In an email to Mr. Knecht reviewed by The Times, the track coach wrote, “I feel that I need to tell you this for the protection of these girls,” and explained that it did not take “much to see that this is extremely degrading to women.”

Mr. Knecht did not respond to several requests for comment.

When Mr. Knecht questioned Ms. Uttech about the awards, she told him that the Big Boobie and Big Booty awards were first given out in 2017, and that the 2017 senior class had decided on them because the stunts the cheerleaders perform require a lot of physical contact. “They are always getting butts in their faces and other body parts,” she told school administrators, according to a formal summary of the meeting obtained by The Times.

In 2017, Ms. Uttech also gave a brunette cheerleader a blonde wig for being “a ditzy girl,” according to a letter sent to Ms. Uttech by a school official that was obtained by The Times.

Ms. Uttech, who does not teach at the school, said in an email to administrators that the Boobie and Booty awards were “a huge hit and truly lots of laughs and fun” and were not meant to hurt anyone. “Their parents thought it was the funniest thing,” she said.

Ms. Uttech forwarded Mr. Knecht an email from a parent of one of the current award-winners. In the note, which The Times reviewed, the parent wrote that the girl found the award — which was the Big Boobie award, according to several cheerleaders and parents at the banquet — amusing and “is not shy about the fact that she earned it fair and square.”

“We understand that we are in a politically correct world these days, but we do like to have fun and keep thing on the lighter side,” Ms. Uttech wrote to the principal.

A parent of one of the girls who won an award declined to speak with The Times for this article, and parents of the other two cheerleaders did not respond to requests for comment.

On May 11, 2018, two months after the ceremony, Ms. Uttech received a letter from Judy L. Rogers, the head of human resources for the school district at the time, asking her to submit a formal resignation and to send a letter apologizing to each of the cheerleaders who won the awards. If Ms. Uttech were to remain as an adviser for the team the next season, Ms. Rogers wrote, “the interaction should be minimum and your role remains largely behind the scene.”

Ms. Uttech and another coach, Nely DeThorne, wrote emails to the cheerleaders, saying they were “sincerely sorry for having caused you and your family any embarrassment or distress. We truly did not mean you any harm.”

Ms. Uttech, however, declined to resign, according to a memo from Mr. Knecht to the school superintendent. She and the two other coaches, DeThorne and Lindsey Kennedy, are still coaching. None of those coaches responded to requests for comment.

In correspondence with school administrators given to the A.C.L.U. through the state’s open records law, Ms. Uttech said that she had never heard any complaints from the girls. But the pressure to remain silent about incidents like these can be intense.

Two current cheerleaders spoke with The Times with their parents’ permission, and described how they felt when the coaches gave the awards. Neither girl won one.

One said: “When the girl went up to accept the Big Boobie award, what do you think everyone in the room was looking at? I would’ve died.”

Lisa Damour, a clinical psychologist who wrote the best-selling book, “Untangled,” a guide to raising teenage girls, said it was clear that the awards were wrong, no matter how one looked at them.

“It skywrites that the person giving out the award is objectifying the teenage girl’s body, and isn’t seeing her as a whole person or an athlete but someone to be measured and rated based on appearance,” she said. “When we talk about how girls look, we’re not talking about what girls can do.”

Offhand comments or gag awards affect teenage girls, Damour said, whether they show offense to them or not.

The mother who initially called the A.C.L.U. to ask for its help said she simply wanted “these girls to be treated with respect. I don’t think that’s too much to ask for.”

But ensuring that just became a little harder. Tremper High will hold this year’s cheerleading banquet next month, according to a coach’s note to the team on Sunday. Only cheerleaders and coaches — no parents — are invited.