Australian surfer Julian Wilson's world title hopes have suffered a serious blow after being beaten in the second round of the Tahiti Pro.

The event's defending champion was upset by local wildcard Tikanui Smith 7.67 to 5.83 on Monday after failing to register a second-wave score in lacklustre surf at Teahupo'o.

With four events remaining on the WSL calendar after Tahiti, Wilson is second in the world championship standings on 31,960 points – almost 4,000 points adrift of Brazilian Filipe Toledo.

However, Toledo can push further of his Australian rival after comfortably progressing to the third round with the highest score of round one (15.50).

Wilson battled through a shoulder injury to win on the Gold Coast and fuelled his title credentials with finishes of third, second and fifth this year.

But the 29-year-old was walking a tightrope after 13th-place finishes at Bells Beach and Bali – only able to discount two scores across the 11-round season.

His 25th-place Tahiti result means at least one of those 13th-place finishes must be counted in the nine that make up his final tally at season's end.

Wilson got off to a decent start in the elimination round, with 5.83 narrowly putting him ahead of Smith's 5.50 effort. 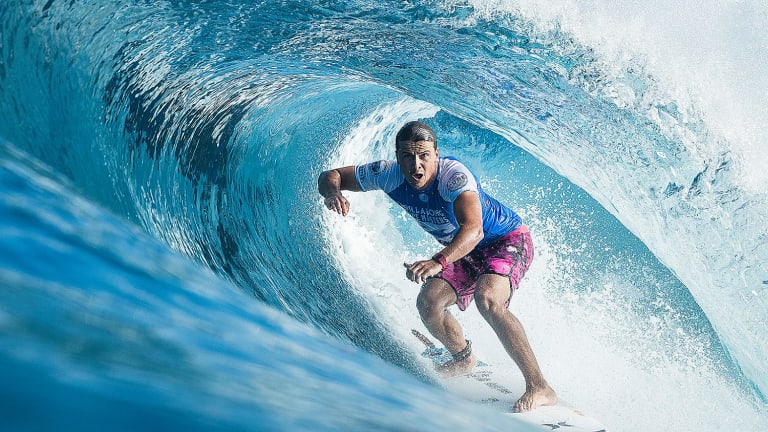 As the clock wound down, Smith recorded 2.17 on his second wave to turn up the heat on Wilson with five minutes remaining.

The Australian patiently waited for the right wave to arrive, but it never did.

He conceded defeat with about 10 seconds remaining, congratulating the Tahitian underdog with a handshake.

Australians Wade Carmichael, Adrian Buchan and Connor O'Leary all progressed directly to the third round along with Parkinson.