Australia's Madison de Rozario said her Commonwealth Games triumph had given her the confidence she needed to claim her maiden London Marathon women's wheelchair victory.

The 24-year-old Perth athlete finished in one hour 42 minutes 58 seconds on Sunday ahead of four-time champion Tatyana McFadden, with another American, Susannah Scaroni, third. 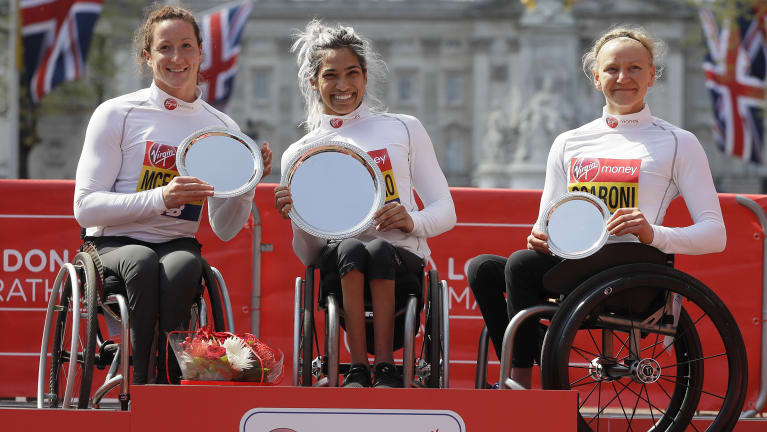 Her victory, in what was officially the hottest London Marathon on record with temperatures hitting 24.1C, also saw de Rozario beat Switzerland's defending champion Manuela Schar as she claimed top spot in only her second outing around the UK capital's streets.

"Just physically doing the 42km felt a lot easier after last weekend and knowing that my body is happy to do it," said de Rozario.

"Then you throw in the competitive part on top of it and I had a bit more confidence going in, knowing that I could stay and that I could maybe sprint finish."

De Rozario, a triple Paralympic silver medallist and dual world champion, who claimed gold in the T54 1500m and marathon for the host nation on the Gold Coast this month, also told World Para Athletics: "It was amazing out there (in London) pushing with the girls as always.

"It was a great atmosphere and I'm really happy to come home like that."

The 37-year-old, seeking a third London win after placing third in last year's race, ended his career representing Australia with victory on the Gold Coast where he carried the flag at the closing ceremony.

Fearnley went into the London race as the course record-holder (1:28:57 from 2009) but it was Britain's David Weir who claimed the glory as he crossed first for his eighth London Marathon title, storming home in a sprint finish ahead of Switzerland's Marcel Hug.