Mitch Creek has kept his NBA dream alive and added another $US93,000 ($A130,000) to his bank account after signing a second 10-day contract with the Brooklyn Nets. 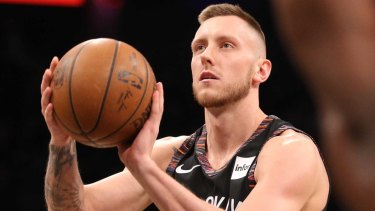 Creek has impressed for the Nets’ G-League team, the Long Island Nets, where he averaged 14.3 points, 5.3 rebounds and 2.4 in 30.6 minutes per game with a 54.2 per cent field goal percentage.

Creek will be under pressure to impress the Nets during his latest stint and on Monday he returned against the Milwaukee Bucks and played 15 minutes off the bench, scoring eight points and adding five rebounds and four assists in a 19-point loss.

Each 10-day contract is worth $US93,000 but under NBA rules the Nets are blocked from signing Creek to a third.

Creek will become a free agent after the second deal expires, forcing Brooklyn to sign him to a regular contract or potentially lose him to an offer from a rival team.

In three games during his first stint with the Nets, Creek averaged 2.3 points and 1.7 rebounds in 6.8 minutes per contest.

Creek had been aiming for a couple of 10-day contracts to prove he could play in the NBA and financially boost the not so lucrative $US35,000 ($A48,500) he would pocket during a season in the G-League.

"Realistically, if you are a good enough player this is a great place to be."