Birmingham: Australian surprise packet Sarah Jane Smith admits nerves played a part as her three-shot lead melted into a four-shot deficit to former world No.1 Ariya Jutanagarn at the US Women's Open.

But the good news is Smith is still right in the mix, sitting in outright second place going into the final round of the biggest tournament in women's golf and well-placed for the biggest result of her long career. 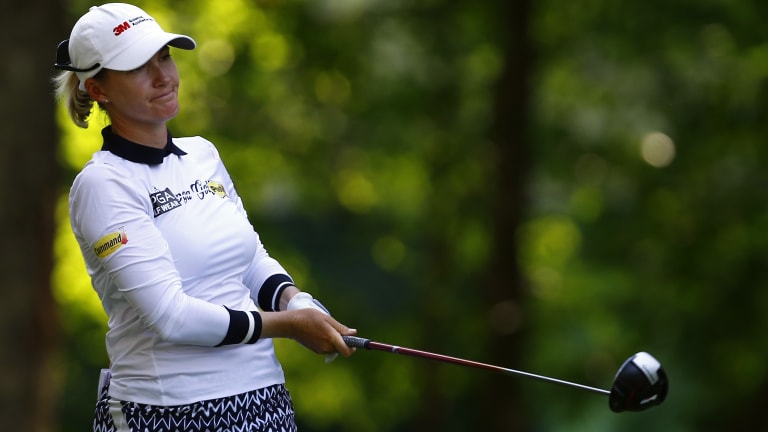 Winless in 222 starts on the LPGA Tour dating back to 2006, 33-year-old Smith played alongside Jutanugarn in the last group in the third round at Shoal Creek in Alabama thanks to her back-to-back 67s but the pressure finally told.

With Jutanagarn advancing, Smith finally stumbled with back to back bogeys at the eighth and ninth holes to go with her 16 pars in a two-over 74 as her challenger shot 67 to take command.

"I felt really good and kept my nerves under control, but I think the nerves showed up in my putting," Smith said. "When you are leaving them short, that's because of nerves.

The pair will go head to head in the final group again on Sunday.

For Smith, who is two shots clear of third-placed Hyo Joo Kim, it's the chance to claim her biggest result and cheque, after two previous second-place ties in regular LPGA events.

"I have nothing to lose," said Smith. "Hopefully, tomorrow I can go out with a little bit more confidence."

For Jutanargarn, its a chance for her ninth LPGA title, after winning at Kingsmill just two weeks ago, and her second major crown, after her 2016 Women's British Open win.

Unlike Smith, 22-year-old Jutanagarn had to rise extra early to complete her second round before playing her third.

"She's a spectacular player, obviously," Smith said. "Her length is just one part of her game. She hits it a long way, but her short game is impeccable. She rolls the ball beautifully.