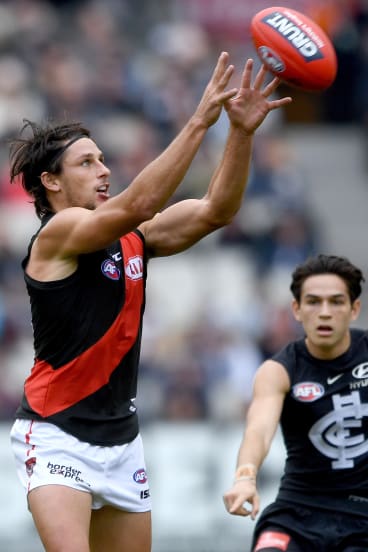 Essendon's Mark Baguley repeatedly sledged Jed Lamb about his father despite being warned by the Carlton player that his father had died.

Baguley made multiple inappropriate references to Lamb's family but in a manner that would suggest the Essendon defender was ignorant of the fact Lamb's father had been murdered. Lamb's father was killed in an axe attack by a family friend when the player was only six years old.

Lamb, one of Carlton's irritants and defensive forwards, physically targeted Bombers veteran Brendon Goddard from the outset of Saturday's contest to unsettle the Essendon leader.

When Baguley attempted to intervene and protect his teammate, he made a crude and inappropriate comment about Lamb's family, but it's understood the comments indicated he had no idea Lamb's father had died.

Lamb immediately told Baguley his father had died when he was young and told Baguley to stop or there would be ramifications.

Undeterred, Baguely repeated the comments about Lamb's family. It is uncertain how many times Baguley made the comments and was warned to stop.

Just prior to three quarter time, and after another verbal jab from Baguley, Lamb followed through on his promise and a fight broke out and players from both sides were drawn into a melee. Lamb was fined $1500 by match review officer Michael Christian for wrestling.

It was the same melee young forward Charlie Curnow was approaching that saw him make contact with an umpire.

At the three quarter time break, Baguley had clearly been told by other players about Lamb's father's death, because he was plainly horrified and approached the Carlton player and attempted to apologise. Lamb told him then that he had told him the truth about his father having died.

There was more push and shove as Blues coach Brendon Bolton ran onto the ground upset and warned the player to leave the Carlton huddle.

Baguley again approached Lamb after the game to repeat his apology. It is understood Lamb acknowleged Baguley's sincerity and accepted the apology but warned the Essendon player he shouldn't have brought up players' families in the first place regardless of his circumstances.