MANCHESTER, England — Sergi Roberto might have noticed Lionel Messi’s battle scars first: the slightly swollen nose, or the faint trace of a bruise, flowering around his left eye. Or he might have realized that the rest of the Argentine’s features were of far greater concern: Messi’s brow was furrowed. His face was set into a scowl. He was staring straight at his teammate. Roberto had let him down.

His offense was one scuffed pass, a deflating climax to a wonderful, flowing move down Barcelona’s right flank. A better ball, a little more composure, and Messi would have had a glorious chance to double his team’s 1-0 lead — not necessarily enough to settle this Champions League quarterfinal, to doom Manchester United, but a significant tilting of the balance ahead of next week’s second leg in Barcelona at the Camp Nou.

It was, in Roberto’s defense, a rare aberration. Until that point, he had offered poise and drive since coming on as a substitute for Arthur, the Brazilian midfielder; he had improved Barcelona considerably. 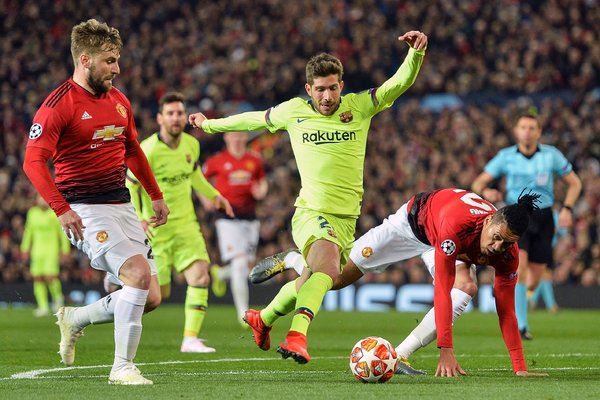 By that stage, though, Messi was in no mood to consider mitigating circumstances. His frustration had been building for an hour or so — with himself, with his teammates, with what he very clearly felt was an overly physical approach from United’s defenders and an excessively lenient one from Gianluca Rocchi, the Italian referee. Through his war wounds, Messi subjected Roberto to his sternest glare.

Whenever Barcelona sweeps into town, it carries with it certain expectations. Barcelona is style and it is beauty. It is treasuring the ball, cherishing possession, every touch perfect and every pass precise. It is attacking intent and artistic sensibilities. Home crowds may not come to enjoy it — they may, in fact, come specifically to disrupt it — but they expect at least to admire it, teeth gritted and breath taken.

Much the same, of course, goes for watching Messi. He had not graced Old Trafford for more than a decade; United had not encountered him at all since 2011, when he orchestrated the defeat of Alex Ferguson’s team at Wembley in a second Champions League final.

Old Trafford was ready for him on this day, though. When the teams were read out before kickoff, there were deafening, vituperative jeers for both Philippe Coutinho and Luis Suárez: both, in Mancunian eyes, can be considered forever tainted by their association with Liverpool. Messi’s name attracted a little opprobrium, too: not quite the howling chorus reserved for his teammates, but not too far-off. In his case, it felt a little like a compliment, as though stopping him would require not just the 11 individuals on the field, but the 76,000 or so in the stands, too.

In some ways, then, Manchester United’s fans would leave the stadium, a couple of hours later, feeling as though they had done their job. Messi did create the game’s only goal — of course he did — with a darting run, a heavy touch, and an improvised cross for Suárez to head home (with the help of a final touch from Luke Shaw), but for long stretches he seemed subdued.

He drifted out wide in search of space and success, but found neither. He dropped deep, to try to light some fire in Barcelona’s belly, but could muster only embers. There were moments, of course — such is the quality of player Messi has around him that there will always be moments — but they were fleeting: the goal itself, the product of two minutes of possession, with every visiting player touching the ball; chances in the first half for Coutinho and in the second, after another spell of endless possession, of what seemed a thousand passes, for Suárez.

By the time Roberto had made his poor choice on the edge of Manchester United’s box, Messi was feeling frayed. He had not lived up to his own expectations, and neither had his team, though it is hard to separate which one of those is cause and which is consequence. Either way, Roberto’s errant delivery was the final straw. Messi glowered and glared.

And yet, while this victory felt like it came despite — rather than because of — Barcelona’s performance, it was, nevertheless, a victory, and in some lights rather an impressive one.

Barcelona did not play at all well for long stretches, and yet emerged with a lead, an away goal, and a sense that United had been kept at arm’s length with comparative ease. The home team, in fact, did not have a single shot on target; there were flurries of pressure, brief spells when Barcelona seemed to be teetering, only to be carried to safety by the nous and composure of Gerard Piqué, Clément Lenglet and Sergio Busquets.

It was not what we expect of Barcelona — and judging from Messi’s reaction, it is not necessarily what Barcelona expects of itself — but it showcased many of the traits that the team that goes on to win this competition tends to possess: maturity, cunning, patience, control, and, most decisive of all, an ability to click, even if only briefly, and find a gear that an opponent cannot match.

It is not a comparison that would be especially welcome in Catalonia, but in that sense it was a display straight out of the recent playbook of Barcelona’s archrival, Real Madrid: a sort of base level of organization, laced with enough individual talent to make a difference; a superiority that is not immediately visible, but that makes itself plain by the end.

Perhaps that is no bad thing. For the last 10 years, Barcelona has always been the most stylish, the most gifted, the most compelling team in the Champions League. It is the most immediately recognizable, the one that inspires the most fear, the one that comes with the greatest expectations.

It is Real Madrid that has won this competition in four of the last five years, though; at Barcelona, they worry that the club has let Messi down, somehow, in only permitting the finest player of his generation, or even of all time, to win the competition four times throughout his career. This may not feel like a vintage Barcelona team. It may not live up to the expectations imposed upon it. If it wins, though, if it lifts Messi’s scowl, it will not matter.