Barcelona lifted the Spanish Super Cup for a record-extending 13th time, coming from behind to beat Sevilla 2-1 on Sunday thanks to a stunning strike from France winger Ousmane Dembele and a penalty save in stoppage time from Marc-Andre ter Stegen. 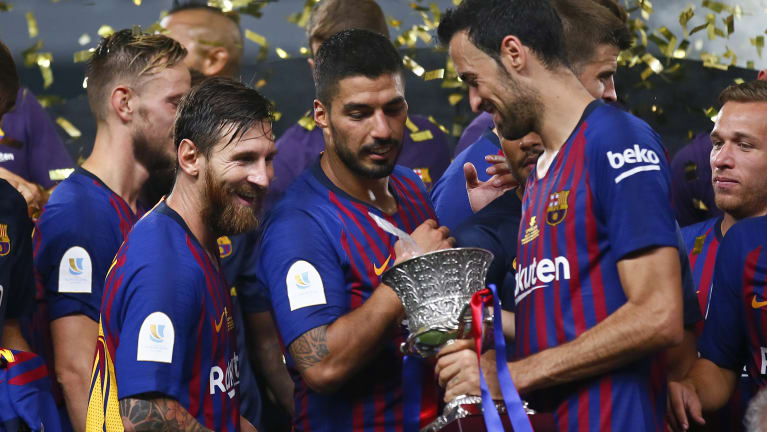 Standard: Barcelona’s Lionel Messi, Luis Suarez and Sergio Busquets, from left to right, look at the trophy after winning the Spanish Super Cup.

King's Cup runners-up Sevilla took a surprise lead in the traditional start to the season against Barcelona when Pablo Sarabia fired home in the ninth minute after Luis Muriel had powered his way through the Barca defence.

The video assistant referee (VAR) was used for the first time in Spanish football to award the goal, which had initially been ruled offside.

Gerard Pique levelled for Barca shortly before halftime by pouncing on the rebound after Lionel Messi's free-kick had ricocheted off the post, while Sevilla's Franco Vazquez glanced a header off the crossbar in the second half in Tangier, Morocco.

The competition, which ditched its traditional two-legged format and was also played outside Spain for the first time, looked to be headed for extra-time until Dembele let fly from outside the area and his shot thumped in off the crossbar in the 78th minute.

Sevilla had a golden late chance to force extra-time when former Barca player Aleix Vidal was fouled by ter Stegen in the 89th minute, but substitute Wissam Ben Yedder struck his penalty softly along the ground and the towering German goalkeeper comfortably caught the ball.

The win makes Messi Barcelona's most decorated player of all time with 33 trophies, one more than former midfielder Andres Iniesta. The Argentine lifted his first piece of silverware with Barca as club captain.

Niko Kovac was taking charge of his first competitive match as Bayern boss – against the team he left in the summer – and Lewandowski's ruthless streak ensured it was a triumphant start to his tenure at Commerzbank-Arena on Sunday.

The 29-year-old gave the German champions a 2-0 half-time lead with a pair of headers, then slotted home a third early in the second half before Kingsley Coman and Thiago Alcantara wrapped things up. 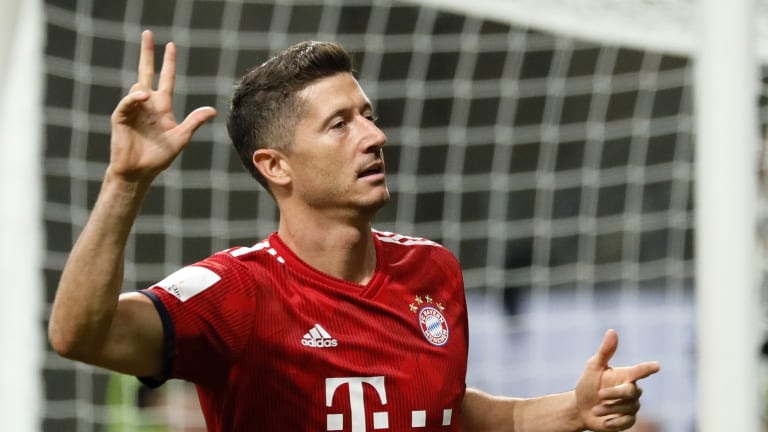 Kovac's first starting 11 was as expected, with James Rodriguez, Corentin Tolisso and Jerome Boateng all resting or injured, with Bayern grabbing the lead in the 22nd minute.

Joshua Kimmich was the creator, surging down the right and drifting in a glorious cross. Lewandowski still needed to beat David Abraham and Makoto Hasebe to the header but that proved unnervingly easy for the Poland forward.

Eintracht's lesson was not learned and less than five minutes later Bayern, and Lewandowski, had their second.

He put his name on the match ball nine minutes after the restart, picking up Thomas Muller's pass and breezing past the ragged Abraham before slotting low into the corner of the net.

Substitute Coman netted a fourth, tapping home David Alaba's cross, and Thiago added the finishing touch late on having been teed-up by Coman.