Brad Fittler has shaken up the image of an Origin coach with his mindful breathing techniques, yoga and inner peace. But he was adamant he had nothing to do with Monday's bare-foot recovery session.

On a miserable afternoon at Camp 'Cuckoo-gee', where the winds hit more than 40km/h and the mercury struggled to get above 12 degrees, the NSW players walked around for nearly an hour without shoes or socks. 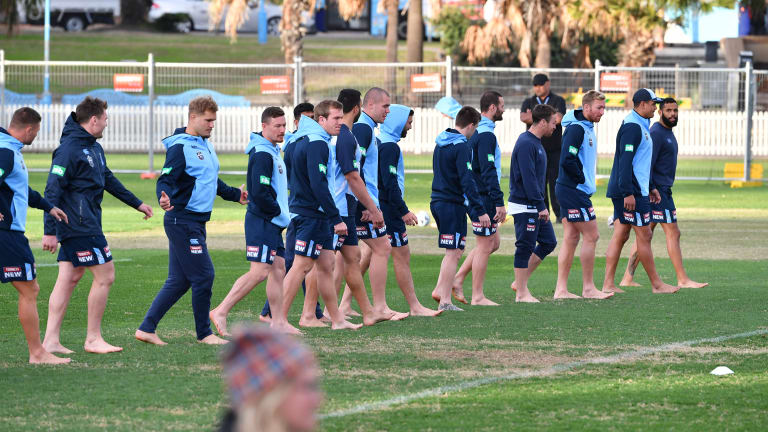 They completed a series of passing drills, but did not break into a jog. Winger Josh Addo-Carr could not help himself and not surprsingly still moved faster than the others.

Andrew Johns was the only one who refused to lose the shoes. One stunned passer-by drove past and yelled from his car: "Put your shoes back on.''

Blues coach Fittler asked the players to finish the Melbourne captain's run barefooted, but had nothing to do with an impromptu 'earthing' session, in which nutrients from the soil are supposed to be absorbed into the body.

"It was their choice. It's a lovely day. I couldn't understand it myself, but they made me do it,'' Fittler said with a smile. "Once you start doing it [barefeet on the grass] you realise it feels good.

"I think it was Maloney [who suggested the earthing]. Blame Maloney. I am a fan of the earth though. They say the neutrons or minerals in the earth are negative, so it balances the body out.''

Maloney tried to keep a straight face when approached by Fairfax Media to explain why it was a bright idea to go barefooted.

"We've done some research and Coogee Oval has more nutrients in the earth than any other [oval] in Australia,'' Maloney said. "Deadset. I looked it up on Wikipedia. Apparently it's good for you. I'm buying in."

While the players and Fittler were in good spirits, they were not mucking about when they spoke about the benefits Billy Slater will bring to Queensland on Sunday.

Slater missed the MCG game because of a hamstring injury, and was ruled out again on Sunday for the Melbourne Storm, but will be given every chance to play partypooper at ANZ Stadium.

"Billy is back and he will make them a lot tighter, without a doubt,'' Fittler said. "He'll bring so much more to their footy team.

"I don't know how they'll use [Kalyn] Ponga, but he's a classy kid, and a bit like [Anthony] Milford. Wherever he comes on he's just hands-on and everyone has to be alert. I've never seen Billy underdone. He's a freak. The way he has come back this year is quite incredible. Everyone in footy is pretty proud of him. His ability and to come back at the level he has, it's hard not to be a Billy Slater fan.''

Maloney said of the Maroons No. 1 and his Kangaroos teammate: "He poses a threat for the 80 minutes, he's always in the game, on the ball, probing and looking for opportunities. He sees the game so well.''

NSW will hit the paddock on Tuesday – with shoes – for their first serious hitout.