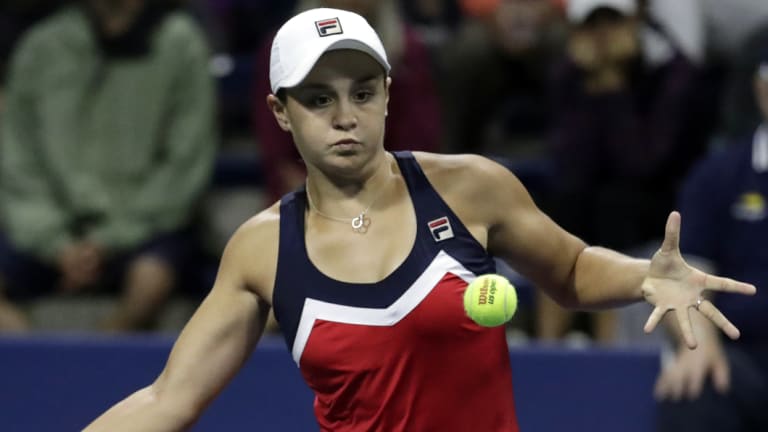 New York: Ashleigh Barty has smashed her third-round hoodoo to storm into the fourth round of the US Open.

Barty ended the run of giant-killing Czech qualifier Karolina Muchova 6-3 6-4 to reach the second week of a grand slam for the first time.

Beaten only twice in 11 matches during the American hardcourt swing, both times to world No.1 Simona Halep, Barty will play either eighth-seeded 2016 finalist Karolina Pliskova or American teenage prodigy Sofia Kenin.

Yet to drop a set and having faced just eight break points all tournament, the 18th seed has emerged as Australia's best title hope since Samantha Stosur reigned in New York in 2011.

Muchova had taken out former world No.1 and dual grand slam champion Garbine Muguruza in round two, but had no answer to Barty's variety and power.

Riding her booming serve, Barty dictated from the get-go, breaking the world No.202 in the second game and charging to a 3-0 lead in the opening set.

She had another break-point chance to go up 5-1 and all but seal the set.

But after missing the moment, Barty was broken out of nowhere to allow the Czech briefly back on serve at 3-4.

The revival didn't last long, with Barty claiming a second break, then the first set in 33 minutes on court five after the match initially scheduled for The Grandstand was moved to avoid a potential midnight start at Flushing Meadows.

There was little respite in the second set as Barty raced to a 4-0 lead before finally clinching victory on her fourth match point after one hour and 25 minutes.

The Queenslander had fallen in the third round in four of her past seven grand slam appearances.

Barty leads Pliskova head to head and beat 19-year-old Kenin in their only encounter, on clay this year in Charleston.

HOW THE AUSSIES FARED ON DAY FIVE OF THE US OPEN (PREFIX DENOTES SEEDING):