Australian No.1 Ashleigh Barty has been knocked out in the first round of the Italian Open by three-time champion Maria Sharapova.

Making her debut in the main draw in Rome, the 16th-seeded Barty produced a battling performance to take the five-time grand slam champion to a deciding set but eventually came off second-best 7-5 3-6 6-2. 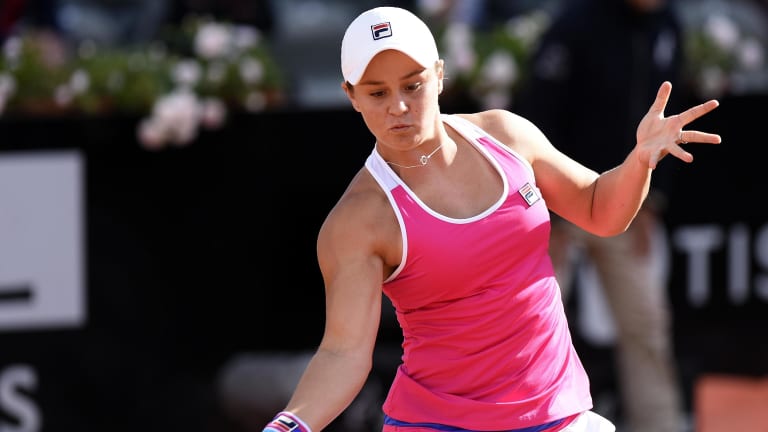 Ash Barty fought back but eventually lost to Maria Sharapova.

Participating in the tournament for the 10th time, Sharapova, who has been struggling to find her form after first-round exits in Stuttgart and Indian Wells and a year on from her return to the court after a doping violation ban last April, needed two hours and 32 minutes to eliminate her battling opponent.

The Russian made a confident start with an early break but Sharapova was still prone to mistakes when switching from her backhand to the forehand side.

Her 22-year-old opponent broke serve to pull level at 5-5 in the very first meeting between the two players.

A vicious forehand winner on the line and a Barty net error secured the first set in 50 minutes for Sharapova.

Sharapova looked shaky in the second set. A handful of unforced errors saw Barty break her serve twice as the world No.18 levelled the match with a solid service game to force a deciding set.

Sharapova, ranked No.40, then saved three break points to remain even with Barty at 1-1 in the final set before a remarkable lob that caught the baseline gave her the lift she needed to finally get a vital break.

Sharapova's revival at the crucial moment blew apart Barty's nerves as she racked up a double fault and a set of forced errors when she traded in a rally to concede defeat to the former world No.1.

Sharapova now meets Slovakia's Dominika Cibulkova in the next round, who defeated Italy's Francesca Schiavone.

"She made me hit a lot of balls, and that's the reason why she's doing so well, seeded here and had the results that she has," Sharapova said.