Spike Lee standing on a street corner waiting for the crosswalk signal. Stan Kroenke, whose family owns the Denver Nuggets, holding court in a hotel lobby. Joel Embiid, the star center of the Philadelphia 76ers, making small talk with the governor of North Carolina. An army of personal stylists waiting to be summoned by their clients for some of the flashiest events of the year.

And then there were the agents and league officials and sneakerheads and reporters, some of whom traveled great distances to make unconventional requests of the weekend’s main attractions.

“Shout out to my fans in Mongolia!” John Collins of the Atlanta Hawks yelled into a camera the morning before his appearance in the Saturday slam dunk contest.

All-Star weekend tends to be a blend of basketball and branding, business and pleasure — a showcase for a powerful league whose global influence continues to expand.

“The whole weekend,” Mike Conley of the Memphis Grizzlies said, “is just a big party.”

The All-Star Game itself, scheduled for Sunday night, felt secondary to just about everything else in the host city, as it has for many years. Daryl Morey, the general manager of the Houston Rockets, recalled waiting in line in 2006 for one of the more popular parties at All-Star weekend in Houston, where he watched Maciej Lampe — a center from Poland who appeared in 64 career games over parts of three seasons — bypass the line so that he could immediately be waved inside by security.

“And I’m like, ‘Man, I’m behind Maciej Lampe?’” said Morey, who would officially join the front office of the Rockets a little more than six weeks later.

All-Star weekend has only grown in recent years. One spreadsheet making the rounds in Charlotte listed more than 100 parties, and that did not include many of the more exclusive events. (Michael Jordan hosted a big one.) Thanks to a change in the league schedule, there is more partying and less deal-making than there used to be.

Last year, the league moved the trade deadline up so that it preceded All-Star weekend. In the past, the deadline came a few days after the game, a sequence which helped create its share of absurdity. One of the more notorious examples came in 2017, when word leaked during the fourth quarter of the All-Star Game that the New Orleans Pelicans had struck a deal to acquire DeMarcus Cousins from the Sacramento Kings. Cousins learned of the trade during postgame interviews.

The weekend vibe is different now.

“It’s so much more fun,” one prominent agent said at a party that he hosted. 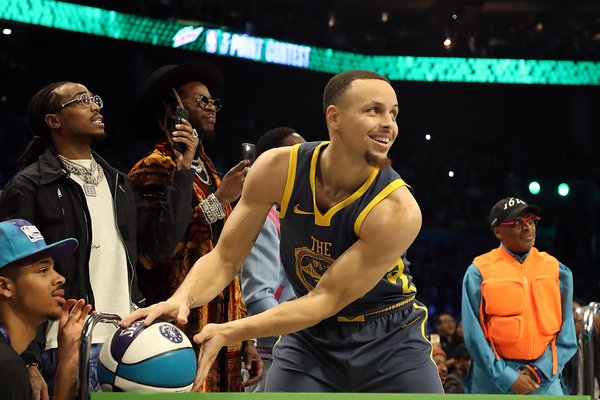 In the corner, a disc jockey who appeared to be in his 60s spun tunes in a Hawaiian shirt and red-tinted glasses, while women wearing bright red dresses passed out hors d’oeuvres. Agents, clients and marketing honchos milled about the room.

But none of this is meant to suggest that deals do not get done.

On Thursday night, at a downtown hotel bar where patrons sipped $25 cocktails, a crowd of very tall men gathered as a private event wound down at a nearby steakhouse. Among the luminaries who emerged from the event: Adam Silver, the N.B.A. commissioner; Kroenke, who also owns the Los Angeles Rams; Brian Rolapp, the N.F.L.’s chief media and business officer; Bill Simmons, the founder of The Ringer; Connor Schell, ESPN’s executive vice president for content; and Bob Myers, the general manager of the Golden State Warriors.

Morey was finishing lunch at an upscale restaurant. Warren LeGarie, a longtime agent to many coaches and executives, and Kiki Vandeweghe, the league’s executive vice president for basketball operations, were dining at nearby tables. Morey was about to head into a meeting with Vandeweghe and Monty McCutchen, who supervises the league’s referees.

“Obviously, we care deeply about where the league is going,” Morey said, “so talking to Adam Silver about strategy or Monty McCutchen about changing how they might call certain things — all that kind of stuff could impact our franchise moving forward, so I try to be involved.”

The atmosphere may seem more relaxed than it was two years ago, when most team executives and agents were focused on the trade deadline, but the shift in the schedule has not pushed aside the league’s most pressing issues.

In Charlotte, a cloud loomed over the festivities, and it came in the shape of a unibrow.

Perhaps you have heard? Anthony Davis, the star center for the Pelicans, requested a trade 10 days before the deadline.

The Pelicans, though, rejected all trade offers for him and instead hope to reap better players and draft picks in a deal this summer. Last week, Pelicans Coach Alvin Gentry called the drama of it all a “dumpster fire.” On Friday, the Pelicans fired their general manager. On Saturday, Davis told reporters that his list of preferred destinations included the Knicks and the Los Angeles Lakers. Hours later, Silver said he would like trade demands and discussions to remain behind closed doors.

In any case, the Davis situation only underscored how much the topic of player movement dominates the league — even in the middle of the season, and even after the trade deadline. Everyone here was fixated on what could happen just over four months from now — at the start of free agency.

Will Kevin Durant leave the Warriors? Will Kawhi Leonard spurn the Toronto Raptors? Will Kyrie Irving bolt from the Boston Celtics? And, again, what about Davis?

“No one likes to see an instance,” Silver said, “where a player is demanding that he be traded when he’s still in the middle of a contractual obligation to a team.”

Silver made those remarks, and his wish for private trade discussions, at a news conference before Saturday night’s skills, dunk and 3-point competitions.

The media forum, like the carefully coordinated outfits stars wore to events around town, has become part of the event’s routine. So has the roll call of courtside A-listers during the dunk contest; this year’s included the rappers Quavo, 2 Chainz, J. Cole and Gucci Mane.

All-Star weekend was not always so structured — or extravagant. Paul Westphal recalled making his first trip to an All-Star Game in 1977 as a guard for the Phoenix Suns. The league hosted a modest dinner. Players received commemorative mugs. Anyone associated with the game stayed at the same hotel in downtown Milwaukee.

“It wasn’t like it is now where the game takes over the whole city,” Westphal said.

Kareem Abdul-Jabbar missed practice, Westphal said, then showed up about 20 minutes before the start of the game in a fur coat. Westphal helped seal his team’s win with a late steal against Pete Maravich. It was a moment he said he would never forget.

This weekend, Westphal was in Charlotte, where he was named a finalist for the Basketball Hall of Fame. He said he was not planning to attend any parties.

“Just dinner with friends,” he said.

In Charlotte, the streets around the host arena, Spectrum Center, were choked with traffic. Concert fliers hung from every lamppost. And none of the guests, spread among numerous hotels at premium nightly rates, seemed to mind the cold weather as countless lines formed for restaurants, bars and pop-up musical performances.

Given all the extracurriculars, it was easy to forget that basketball was the only reason anyone was here in the first place — and perhaps that was because the only legitimate basketball was being played in a college gymnasium a few miles from downtown. A group of elite teenage prospects, without much fanfare, had convened for the league’s annual Basketball Without Borders Global Camp.

In all, 63 boys and girls from 31 countries played in front of scouts and executives who hoped to identify the sport’s next batch of stars.

The spotlight will find them soon enough.