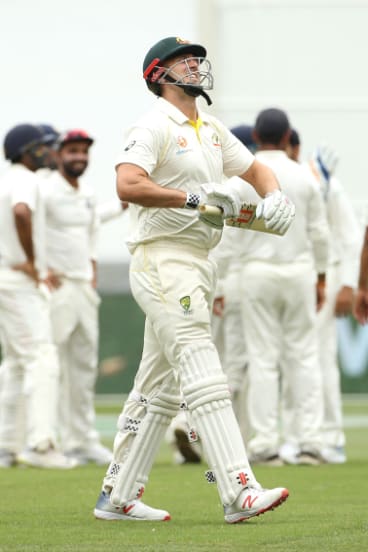 In nine Test matches since Australia beat up on a demoralised England at the SCG at the start of this year, one Australian has made a century, once. That was Usman Khawaja’s 141 in Dubai in October. In that stretch, there has been only one other score of more than 80, made would you believe by Mitch Marsh.

It hardly needs a statistic to know that Australia’s batting without Steve Smith and David Warner is poorer and at times has looked destitute. But Khawaja’s innings in the desert stands in isolation for another reason: it was as vast as it was high, spanning nearly nine hours and 302 balls. It was an opus in the oasis. All together, Khawaja batted for the best part of 13 hours in that match.

Abetting him, Travis Head batted more than three hours and Tim Paine nearly four, keeping out 370 balls between them. Set the mission of surviving nearly five sessions to save the Test match, they did it. It was a mini highlight in a lean and mean year.

At the MCG, the conditions were different, but the scale was the same. Australia again was left to bat for the best part of two days to save a Test. They barely got through one. No Australian made 50 for the match until the estimable Pat Cummins in the shadows of dusk and defeat. None until Cummins lasted 100 balls, bless him. He is both Australia’s leading run-maker and wicket-taker in this match, and Thursday was the nightwatchman designate, too. He is Australia’s foundation stone.

But for the rest of the batsmen, dereliction of duty in the first innings was followed by desertion in the second. There were few alibis. If the pitch was a factor in the first innings implosion on Friday, it was an incidental in the second. For stretches at time, it gave the batsmen no trouble and even a bit of featherbedding. Few balls beat the bat, fewer found edges. It was fast enough for easy timing, slow enough to allow for late adjustments even to the canny spinner Ravi Jadeja. So fluently did it play that that Australia’s scoring rate was the highest of the match. Cummins, at No. 8, rode out a couple of steeplers when he first came to the crease, then batted without alarm and with ever growing authority. He ended up alone on the bridge.

This, remember, is the pitch on which England’s Alastair Cook made 244 not out last year. Yesterday, Cook was knighted, but Australia remained benighted.

No Australian could attribute his dismissal to a rogue bounce or a rude deviation. Even the rough was smooth. Most were failed by lapses in concentration or relapses in technique, and Mitch Marsh by spluttering synapse. Having lofted Jadeja majestically over the sightscreen, he drove the next ball he faced from the spinner straight to cover. Please explain?

I once saw Allan Border bat all day to save a Test match against the then mighty West Indies in Trinidad. He made 100 not out, with just three fours. Border also batted through the second day of that match. Marsh’s penance should be to watch both those innings in its entirety, twice over. He will have the spare time.

Khawaja has runs on the board and in the bank; he is the one certainty. Shaun Marsh and Head played with the aplomb and sometimes flourish of Test batsmen, but not the durability. Neither was reckless, but the occasion called not merely for discipline and restraint, but for a Border/Kawaja/Cook/Pujara-like vigil. Marcus Harris did not quite dispel doubts, and poor Aaron Finch left no doubt that he is in the wrong place and perhaps the wrong space. 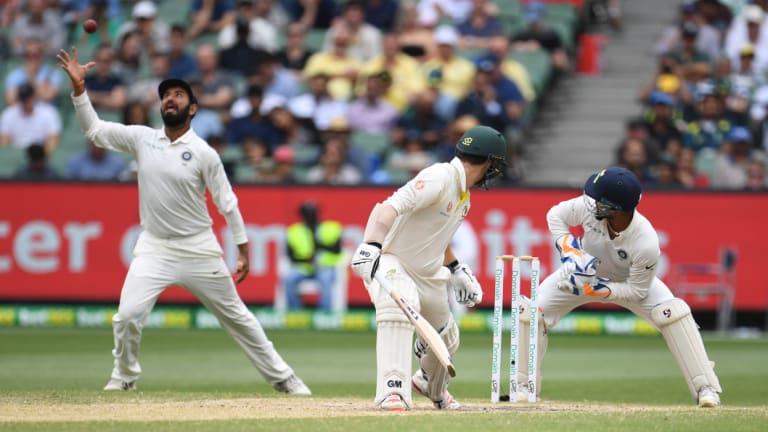 An uneasy Travis Head at the crease on Saturday.Credit:AAP

In cricket as in all competitive pursuits, one man’s mishap is another’s chance. The banishment of Steve Smith, David Warner and Cam Bancroft was such a crossroad. Variously, Joe Burns, Matt Renshaw, Peter Handscomb, Finch, Marnus Labuschagne, Head and Harris have had that chance. None has seized it with both hands.

Head and Harris are Australia’s leading run-makers in this series, and de facto will be retained to have their way with a poor Sri Lanka team in late January and February. Each has his weakness. For Harris, it is his oft-hit head. For Head, it is his sometimes stuck-fast feet. But they have shown enough to persevere with. The Sheffield Shield won’t throw up new challengers in the interim, because there is no shield in the interim. The proving ground will be closed.

Head and Harris can expect to go on to the Ashes, alongside Khawaja and Shaun Marsh and joined by parolees Smith and Warner. In all ways, it will be a top order with much ground to make up.