The Blues are persisting with Tana Umaga as their Super Rugby head coach despite three seasons of struggle.

Former All Blacks captain Umaga has extended his contract with the under- performing Kiwi outfit for a further year to the end of 2019, the Blues announced on Wednesday. 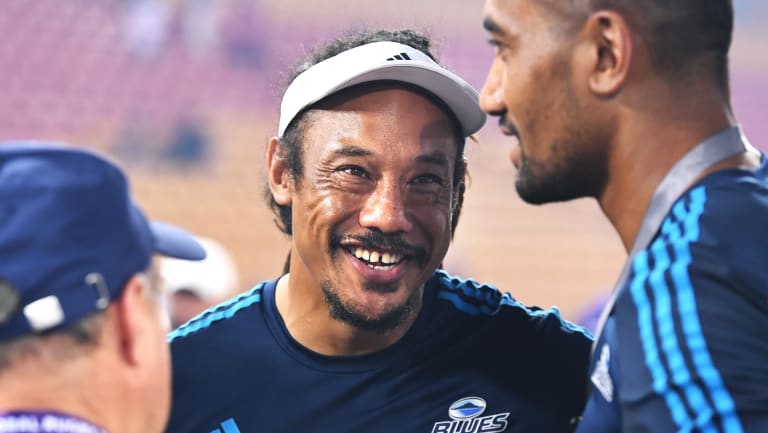 Stand by your man: The Auckland-based Blues are sticking with Tana Umaga despite their struggles.

The retention of the 44-year-old comes even though he has been unable to end a play-off drought which dates back to 2011 for the Auckland-based side. In Umaga's first two seasons, after succeeding John Kirwan, the Blues finished 11th and eighth in Super Rugby.

They are 13th this season and poised to finish last of the five Kiwi teams for a fifth successive year. Despite that, Blues chief executive Michael Redman said sacking the coach would undo much of the progress he believes they are making.

"Changing head coach now would mean we throw out three years of hard-earned experience and starting again which we believe is the wrong thing to do," Redman said.

The Blues confirmed one of Umaga's assistants in 2019 will be his former All Blacks teammate Leon MacDonald, with the pair previously working together when their New Zealand under-20 team won the 2015 junior world championship.

MacDonald clocked up more than 100 matches, mostly at fullback, for the Crusaders and was also an assistant coach there last year. Umaga believes the combination can bring success, and quickly.

"We are in the results business," he said. "Believe me, no-one at the Blues right now is happy with where we are at but everyone has bought in to our plan, believes in it and works so hard every day to perform."