Aron Baynes describes LeBron James as "the head of the snake".

Baynes, the 208cm tall, 120kg brute who sports a beard and hairdo that makes him look like he just walked off the set of Vikings, knows how to deal with snakes. 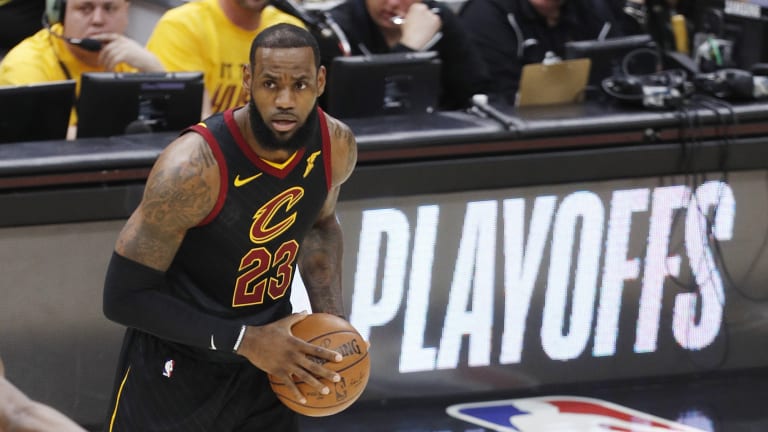 Head of the snake: The Celtics are wary of Cavs star LeBron James.

He grew up in Queensland, home to taipans, death adders, eastern browns, red-bellied blacks and plenty of others on the world's most venomous snake list.

Baynes and the Boston Celtics will take on the Cleveland Cavaliers in game one of the NBA eastern conference finals on Sunday (Monday 5.30am AEST) and the Australian says it will not be up to him, or any other single player, to deal with the extraordinary James.

"We know where the head of the snake is and we know what we have to focus on," Baynes said.

It was a team-first approach that led to the Celtics comprehensively defeating fellow Aussie Ben Simmons and his Philadelphia 76ers in five games.

The Cavaliers are a different beast.

With James so strong, the Celtics will likely be unable to defend him one-on-one.

Key to the series could be how Boston handle the Cavs' big men Kevin Love and Tristan Thompson, shooters JR Smith and Kyle Korver and point guard George Hill.

"It's about playing five guys within our system, sticking to it, and if we do that with the right intensity, then we're going to be in a good spot," Baynes said.

James has been putting up superhuman numbers in the playoffs, with a league best 34.3 points per game, third-best nine assists per game, 10 triple-doubles and buzzer-beating, match-winning shots.

James is full of respect for the Celtics' players and coach Brad Stevens.

"They have guys who are damn good no matter whether they are young or not," James said.

"They know how to play basketball and their coach knows how to put them in a place to succeed."

Baynes, after playing a central role against the 76ers, may have less court time against Cleveland, who have a mobile starting line-up without a legitimate starting centre.

Stevens successfully countered the athletic Milwaukee Bucks in the first round of the playoffs by pulling Baynes from the starting line-up.

The Cavs have won two of the three regular season meetings with the Celtics but both teams are dramatically different in the playoffs.

The winner of the best-of-seven series will play the victor of the highly-anticipated western conference finals series between the top-seeded Houston Rockets and the defending champions, Golden State Warriors, for the NBA title.

The Rockets host game one in Houston on Monday (Tuesday 11am AEST).