Unhappy with mere tanking, displeased with their success at earning the N.B.A.’s worst record, the Knicks took Kristaps Porzingis, their once-in-a-generation asset, their most, and perhaps only, popular player, and traded him to the Dallas Mavericks on Thursday for potsherds and trinkets.

Actually, point of information: Porzingis was not even the center of the transaction. The Knicks tossed him in as a sweetener to persuade the Mavericks to also take the putative shooting guard Tim Hardaway and his frightful contract. It was Steve Mills, the team president, whose feel for failure is bred in the bone, who handed Hardaway that $70.9 million deal two years ago. Now Mills and the rest of the Knicks’ vaunted leadership group have traded Porzingis to get rid of it.

Had I been able to reach Mark Cuban, the Mavericks’ owner, for comment on his Porzingis heist, I can only assume he would have dissolved into uncontrollable laughter.

We live in a national age of delusion and unapologetic rule-breaking, so perhaps there is a pleasingly nefarious explanation for this trade. If so, Knicks management should cling to it like a barnacle on the hull of a sinking ship. Perhaps the Knicks have successfully tampered with another team’s asset and know that Kevin Durant or Kyrie Irving, or both, will sign in the summer now that the franchise has plenty of cap space.

But I would put the chances that the Knicks could pull off something that clever and diabolical at 6.82 percent. When in doubt it is wisest to bank on inexplicable incompetence.

Porzingis apparently helped set all this off by requesting a trade. As a 7-foot-3 23-year-old coming off a serious knee injury, he represented a conundrum for management. Do you commit this summer to a long-term contract of the sort that would tickle the tummy of Croesus? Let’s assume the Knicks’ crack medical and rehabilitation staff warned that his future looked iffy.

If so, why wouldn’t Knicks management dangle Porzingis for a week or more to interested teams and let natural competitive instincts come into play around the league? When healthy, Porzingis is a top 20 player, and that made him a rare asset. Instead, the Knicks traded him posthaste for the aging center DeAndre Jordan and a talented, but raw, point guard, Dennis Smith Jr. The Knicks already have raw point guards, so maybe management succumbed to a collect-them-all fever.

All theories and psychological analyses are welcome.

I’ve followed the Knicks for decades now, and my sons soon contracted my affliction. Like residents in a smallpox ward we often debate whether we have divined one obscure reason or another for faint hope, which is why I hopped the subway a week ago and went to Barclays Center to watch the Knicks take on the Brooklyn Nets.

It was a desultory affair at times, but it did feature a Nets team that is climbing in the standings with surprising speed, in contrast to the Knicks, who are hurtling happily downward. And the Nets played like men returned from a near-death experience, happily surprised to possess a winning record after four losing seasons in the Hades of the N.B.A. 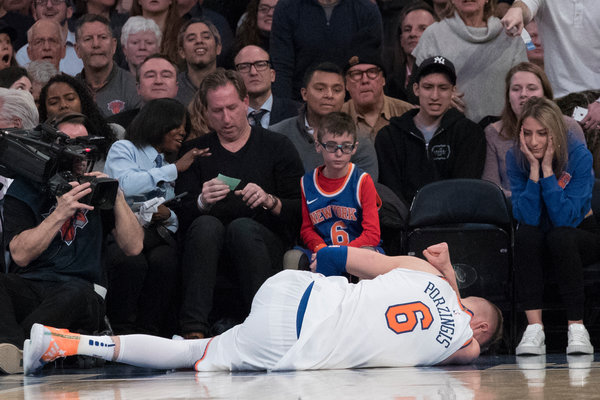 To his credit, the Nets’ general manager, Sean Marks, has executed a smart rebuild with a fishmonger’s eye for plucking useful talent out of the discard pool. The Nets play a swarming defense with a collective bounce, and their wait-who-is-that-guy no-names are long on desire and short on distorting egos. It was possible to daydream that if only they could sign a Durant or a Kawhi Leonard as a free agent, the Nets could be a genuine terror in the Eastern Conference.

The Knicks offer terror of a different sort. They decided this season to double down on what they have done instinctually for so many years and devote their energies to pure losing. They are superb at it. Entering Friday’s game against Boston, their record stood at 10-40, which assures them a high draft pick in June.

The modern N.B.A. is an upstairs-downstairs league and runs a two-tier competition: The upstairs version is staged by the top 10 or so teams and is all about winning and praying that your team will not face the Golden State Warriors until late in the playoffs, at which point you will be excused for exiting quickly and feet first.

The downstairs version involves a half-dozen teams, and the point is to become the worst of the worst and pray you can draft a young stud who will turn around your franchise. The worst-run teams return year after year to this brackish well. This is the game at which the Knicks currently excel.

And there is indeed much unlovely about these Knicks. Their defense occupies a netherworld between theoretical and clueless. Their now-traded shooting guard, Hardaway, appeared to have had his conscience surgically removed and would shoot anywhere at any time and none too successfully.

And yet, and yet, I thought these Knicks offered a rough hope. They have the youngest team in the league, a group of foals, and a few might even possess lasting talent. Put them together with Porzingis, and something intriguing might emerge.

Friends resisted these optimistic blandishments, and I dug that. In James Dolan, the Knicks have an owner who meddles and hires and fires team presidents and coaches like a mad king. In the past 17 seasons, the Knicks finished with a winning record precisely twice. This one will be no better.

Still, I felt hope. The new coach, David Fizdale, is a clever basketball man who seemed O.K. with playing dorm father to a collection of teenagers. This week, Fizdale pointed to the Philadelphia 76ers, the Denver Nuggets and, yes, the Nets as young teams that weathered harrowing days and re-emerged in solid shape.

“All of these teams went through hell,” Fizdale said. “You got to get steeled up. This league is not going to let you walk in here as a young team and just think you’re going to come out winning.”

Not long after those remarks, the Knicks traded Porzingis. My eldest son, Nick, a fierce dead-ender on the question of team loyalties, is now recommending a family summit with a single agenda item: to switch or not to switch to the Nets?

This feels almost as inconceivable as trading a 23-year-old star-in-the-making for potsherds.

Mission accomplished all around.