Bellamy hints at surprise selections, tips Smith to play on for years

Melbourne Storm coach Craig Bellamy has hinted at some surprises when his side runs out against Manly at AAMI Park on Saturday night.

The Storm will be without captain Cameron Smith due to a one-week suspension and originally named utility back Jahrome Hughes on the bench.

Emerging New Zealand star Brandon Smith is tipped to play at hooker in place of his captain, but the younger Smith is known for his energetic play and may not be able to play all 80 minutes in the demanding role.

This could see Bellamy swing some surprises – but he was coy about what his plans were, with forward Joe Stimson also capable of filling in at hooker in short spells.

The Storm were known for surprise selections before the NRL forced clubs to name a 19-player squad on the day before the game.

“Jahrome is pretty versatile, he could end up anywhere,” Bellamy said on Friday.

“At some stage he may end up on a foreign position, we will see what happens tomorrow night.” 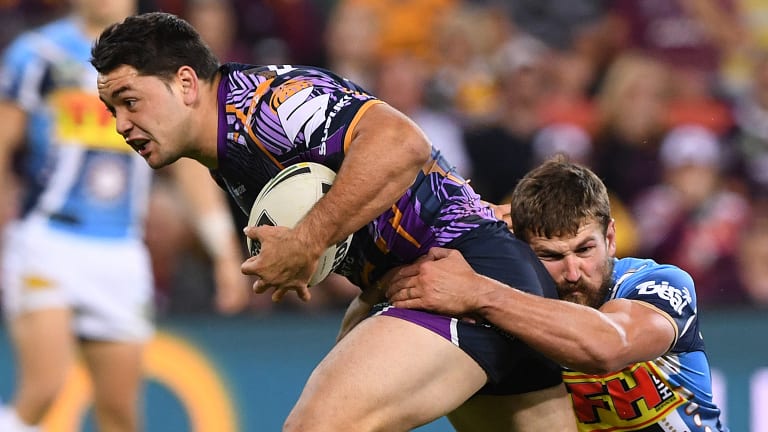 Hughes has played at full-back, five-eighth and in the outside backs during his career but missed the start of the season after injuring his shoulder during trial games.

“We have a couple of guys we need to check injury-wise and we are not sure how long Brandon is going to go,” Bellamy said.

“At some stage we are planning to have to replace Brandon as we don’t think he has 80 minutes in him, but he could get some adrenaline at the start and you never know what you are going to get with that kid."

While Cameron Smith will miss this game, Bellamy sees no reason why he couldn’t play on for multiple seasons after his sudden retirement from representative football earlier this week.But Bellamy knows the mental fatigue Smith cited as part of his decision could eventually push the NRL great into full retirement.

“The way he is going at the moment and if he is still mentally keen to do the work that he will need to do then I can’t see why he can’t go on for another two or three years,” Bellamy said.

“But it’s that mental attitude that will be the thing for him – you would think that at some stage he will get tired of doing those little things away from training that he needs to do but he is still the last guy to leave training and he still has that hunger and belief that he can still get better.”

The Storm lost another star forward on Wednesday when Queensland prop Tim Glasby signed a multi-year deal with Newcastle starting next season – but Melbourne have reportedly re-signed Australian second-rower Felise Kaufusi to a four-year deal.

“The improvement in Tim’s game and his leadership skills have been remarkable and he has always looked to do the right thing by the club and his teammates,” Bellamy said.

“To see him in an Origin jumper last year was a real thrill for everyone at the club. It’s sad that he is moving on but we wish him all the best. He knows he has a job to do for the rest of the year and I’m sure he will do exactly what he has done in the last five years for us.”

The Storm will be mindful of Hodkinson’s impact, but Bellamy also knows the veteran back could need some time to adjust to his new teammates.

“He is a quality player so coming into the side without too much preparation might be a little issue for him, but if Trent Barrett thinks he can add to the side this early he will put him in,” Bellamy said.

The Storm host the Sea Eagles at AAMI Park on Saturday at 7.30pm.