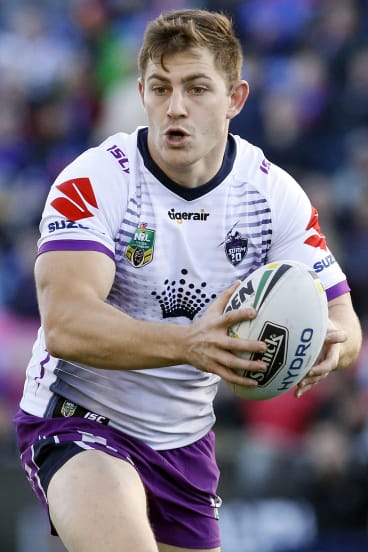 Ryley Jacks will return this week.

Melbourne Storm coach Craig Bellamy has told his cobbled-together side to “grit their teeth” and find a way to beat an equally understrength St George-Illawarra Dragons on Thursday night.

Both clubs have felt the impact of State of Origin with five Storm and four Dragons players out for the showdown between third and first at AAMI Park.

Melbourne's backline will again take a different form as Bellamy looks to fill Billy Slater and Cameron Munster’s roles at fullback and five-eighth, plus reintegrate Ryley Jacks into the halves after leaving him out last round.

Jahrome Hughes has been named a halfback, Jacks at five-eighth and Young Tonumaipea at fullback but the Storm have left themselves plenty of options with young guns Brodie Croft and Scott Drinkwater in the 21-man squad which will be trimmed down to 17 by game time.

While Bellamy spoke glowingly about Hughes and moved him to the halfback role last week, it wouldn’t be a shock if Hughes was at fullback and Croft or Drinkwater in the halves with Jacks.

Bellamy said Hughes was worth retaining due to his strong play while Jacks deserved a recall.

“There are a couple of things that we thought Ryley could have been doing a bit better but the games Jahrome has played, even if we wasn’t in the halves, he was playing really well,” Bellamy said.

“So last week we had Billy coming back and it was either leave Jahrome out altogether or find him another spot because he has been playing so well.

“We like to reward form and effort here and he was doing plenty of that so that’s why he stayed in the team.”

During the past decade the Storm have had Cooper Cronk to steer the team from halfback and captain Cameron Smith leading from the hooker position. But now Cronk is gone, Bellamy said others had to step up and support Smith.

“You take it for granted a little bit,” Bellamy said.

“We had different players in the five-eighth role over the years but I don’t think that effected us too much because of Cooper’s experience and his wonderful game management.

“Without Cooper there it has had a bigger effect as our halfbacks haven’t been that experienced. It has made it easier on the halves but it is not ideal to be swapping and changing your halves but some of that has been us and some the circumstances.”

I’m sure they are in foreign waters at the moment.

The Dragons were the benchmark of the competition for much of 2018 but they have had a few hiccups during Origin and Bellamy said their less experienced representative players could struggle with fatigue once the series finishes next Wednesday night.

“I don’t know if they're playing as well as they were at the start of the year but if you have a big representation of players,” Bellamy said.

“I’m sure they are in foreign waters at the moment but they will work their way through it.”

Bellamy was surprised when he saw his side move into third place after last week’s win over Sydney Roosters but he knows the pecking order won’t be sorted until the weeks leading into the finals.

“I was a bit shocked when I saw we were third on the ladder, we have been a little bit inconsistent,” Bellamy said.

“It hasn’t been great execution, just been a whole heap of effort from our players collectively and individually – that’s been tremendous for us.”