Three ACT Brumbies props almost pulled of a hat-trick of John I Dent Cup miracles on Saturday, but Ben Alexander's first game in six years for the Uni-Norths Owls ended in heartbreak.

The individual club rugby tales of Alexander, Faalelei Sione and Les Leuluaialii-Makin were the perfect subplot to three separate tense battles in the capital's premier division. 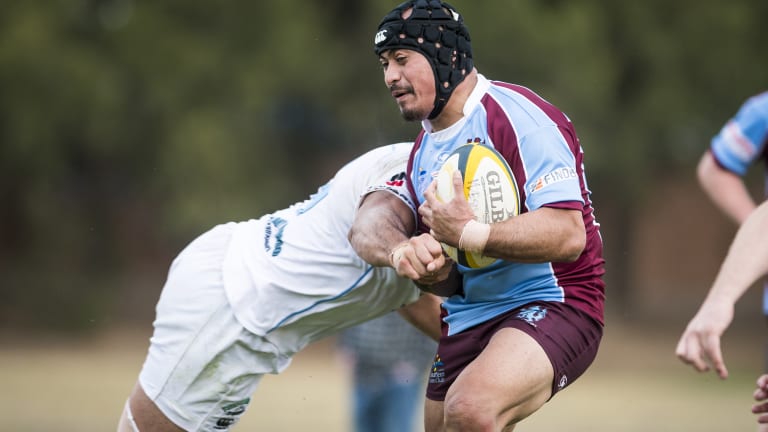 Alexander, the most capped player in Brumbies history and a passionate Owls clubman, played his first game since 2012 and was on track for a dream return until Tuggeranong spoiled the party.

The Owls were leading 17-12 with no time left in the match when Tuggeranong's Brett Naylor scored from close range to snatch an unlikely draw in dramatic fashion.

Alexander was gutted and an Owls win would have capped a brilliant day for his fellow Brumbies front-rowers union as Super Rugby players returned to action.

Leuluaialii-Makin's scrum dominance helped the Queanbeyan Whites beat Wests 26-20 at Jamison Oval, but Sione's effort was more like a winger than a front-rower.

The Royals big man scored a hat-trick of tries to inspire defending premiers Royals to a win against the Gungahlin Eagles 38-5 at Phillip Oval.

But while it was all scrums and tries for the Brumbies' trio, goal kicking proved the major difference in two of the three matches after Tuggeranong missed a conversion to win the game.

Wests also struggled with the boot and failed to convert any of their four tries in a six-point loss, which leaves last season's grand finalists still searching for their first win of the year.

"It was four tries each so it was unfortunate we couldn't get there, but to be honest we didn't have any of the ball and the guys gutsed it out," said Wests coach Craig Robberds.

Leuluaialii-Makin made his presence felt at scrum time, helping Queanbeyan to a first-half penalty try to give them a narrow half-time lead.

Carl Elliott and Tom Holland scored tries in the second half for Queanbeyan despite having OJ Noa sent off after the break.

But Wests refused to go away, with Charlie Luteru scoring a double and Brodie Leber crossing to give the home side hope in the last seconds of the game.

Queanbeyan held on and the Whites are undefeated after the first three games of the year.

"That's obviously the primary purpose and we did that, but we looked really good and then couldn't build pressure," said Queanbeyan coach Paul Dillon.

"It was just silly stuff. I told [the players] they're a talented bunch of footy players, but they need to be smarter. If we don't get smarter, we won't be genuine [contenders] at the end of the year.

"It was probably a step backwards in our development. We need to be twice as good next week when we play against Tuggeranong."