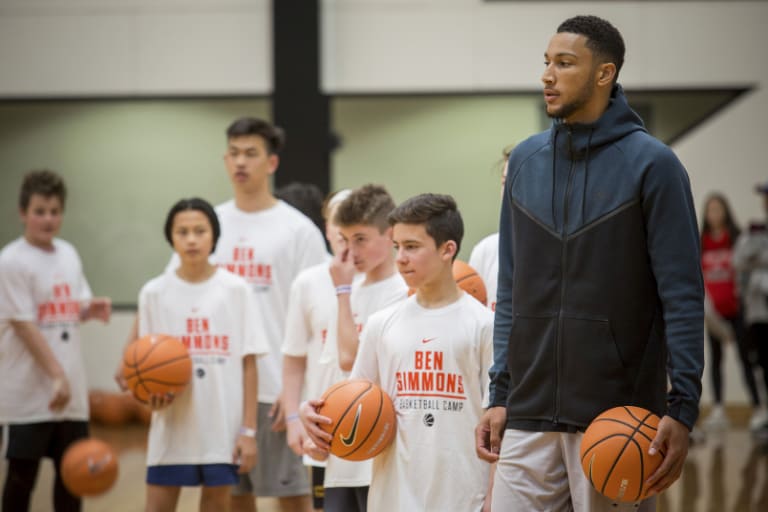 King of the kids: Ben Simmons’ camp in Melbourne was the place to be for starry-eyed youngsters.

What more does Ben Simmons have to do to prove he is a point guard?

The Australian NBA star is preparing for his second season with the Philadelphia 76ers, contemplating how he can better a rookie of the year campaign which saw his Sixers rise back to the Eastern Conference semi-finals and his own numbers better rookie records held by all-time greats like Magic Johnson and Oscar Robertson.

But at 208-centimetres tall, the debate still rages between some in the NBA universe over whether Simmons should be defined as a point guard, even as his play made the Sixers noticeably better both statistically and in plain view.

Simmons has become such a celebrated player he was selected to be on a special Australian/New Zealand cover for the NBA 2K19 video game, which has LeBron James and Giannis Antetokounmpo as the cover athletes around the rest of the world.

But even NBA 2K’s creators couldn’t completely allow themselves to list Simmons as a point guard. In the game he starts at point guard for the Sixers but in the MyTeam mode, where players are listed individually, he is classified at power forward.

In both modes, Simmons has playmaking ratings high enough to bring up the ball and create for his teammates.

Last season Simmons played 81 games, two play-off series and finished fifth in the NBA in assists with 8.2 per game, one place above celebrated point guard Chris Paul and other stars like Damian Lillard, Ricky Rubio and Kyrie Irving.

Simmons spoke with Fairfax Media from Philadelphia on Thursday announcing himself as the “Fresh Prince” when entering his name for the phone interview.

In his junior years, his dad Dave Simmons, a championship-winning NBL import, always pushed to have Ben trained and played as a guard, even when he was the tallest player on his team. Ben has no doubt what his position is.

“I know I’m capable of running a team and being a point guard.

“I’m also not worried about what people are saying; fans, media, whoever. At the end of the day this is what I do best and I shouldn’t have to listen to fans or whatever the case is.”

As for NBA 2K’s positioning, Simmons quipped he would be making a call while also praising the game and his “surreal” place as a cover athlete.

“I have no idea. I have to fix that, I’ll make the call tonight,” Simmons joked.

Simmons has bigger things to ponder. The Sixers will start as one of the NBA’s darling sides with Simmons and all-star centre Joel Embiid the faces of coach Brett Brown’s team, and leaders alongside veterans like JJ Redick and TJ McConnell.

“My expectation is to come in as one of the leaders even though I’m one of the youngest guys,” Simmons said.

“I also know that I can be on the leaders just in how I carry myself, what I do in the gym and being the first one there and working the hardest. It’s little things like that that I try and do to let everybody know that I want to be one of the guys that’s looked at as being one of the best.”

After he missed the 2016-17 season due to a foot injury, expectations weren’t super high for Simmons as he entered last season.

But he never bought into that. Now he plans to go even higher and has been working constantly on his shooting in all areas and his finishing around the rim.

Counter moves have also been a big part of his summer as teams will have scouted his favourite moves and be taking them away.

“I’ve just been working every day on counters. Whatever I need to really work on, I’ll have a counter for everything,” Simmons said.

“At the same time, I know what to expect and know I have to play at that level every night, every time I step on the floor.”

They say if you want to be the best you have to beat the best. In the NBA, what the best players do is work out with each other. Simmons has long enjoyed the chance to workout with LeBron James and uses “King James” as his mentor.

But is he concerned James will use their workouts to learn all his moves?

“That’s a given,” Simmons said.

“Guys like that are always looking at players coming into games. LeBron has been doing that his whole life where he is watching everybody play and knowing their moves.

“Basketball is an IQ game and you have to use your IQ every time you are on the floor, even if you are tired or whatever the time is on the clock.”

Simmons isn’t scouting at that level yet but he is pushing himself to invest in his long-term health.

“It’s one of those things where you have to be putting time and money into it,” Simmons said.

“If you want to play the game for a long time you have to do that, it could be a little thing like making sure you have a chef in the house every day cooking meals or taking extra time to get into the cold tub or get a massage.

The Sixers open their campaign by hosting NBL champions Melbourne United in Philadelphia for a pre-season game on September 29 with ESPN and NBA League Pass showing the match live.