Flint coached the Spirit to a 60-58 win over Melbourne Boomers on Monday night after Pritchard asked him to coach the final term.

Pritchard said in a video on the club's social media accounts he did not expect to have ongoing issues as he had managed heart arrhythmia for many years.

"What happens is it gets out of rhythm and when that happens blood doesn't get sent around the body," he said.

"So by the end of the third quarter I knew it wasn’t in rhythm so we went through the three-quarter-time talk but I knew after three or four minutes it gets to a stage where if I stood up, I would fall over.

"So I said to Dave, 'I'm going to sit down, you take over'. So Dave coached the final quarter but I could still get messages through during timeouts and that kind of stuff."

Pritchard is expected to lead the Spirit (4-2 win-loss) when they host the struggling Sydney University Flames (0-7) on Sunday.

Pritchard said he dealth with the issue every six months or so but this time couldn't get it back in rhythm. He visited the hospital after the game, but added he was back to normal by 1am.

Meanwhile the Melbourne Boomers will face one of the biggest tests of their season when they head north to take on reigning champions Townsville Fire on Sunday. 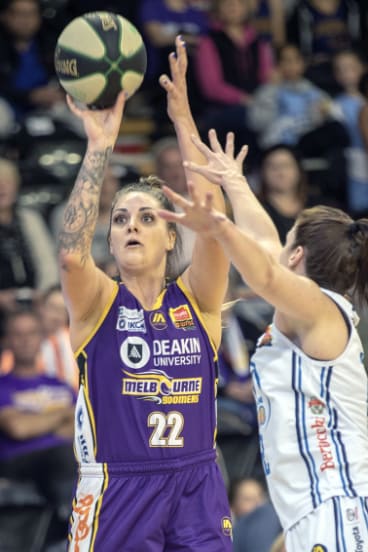 The Fire and Boomers faced off in last season's grand final series, which the Fire won 2-1. But the Boomers are a much different side this time around.

Boomers forward Cayla George was a member of the Fire's title-winning team and said she looked forward to returning to Townsville and seeing friends. Her husband's family hails from Cairns.

George, who had a team-high 27 points in a win over Sydney on Thursday night, will likely play more minutes than usual at centre with regular centre Ezi Magbegor still recovering from a hand injury.

"I've got a lot of family down from Cairns," George said.

"I can't wait to see the championship banner and see all the girls. I have a lot of history up there, great history, and the Fire fans and organisation have always been good to me.

"I can't wait to see everyone and I know it will be strange seeing me in these colours but they will get over it."