On the night of September 14, Bentleigh Greens coach John Anastasiadis was distraught.

He sat in the clubroom at the Kingston Heath complex staring into space, still trying to process what he had seen in the NPL semi-final that ended minutes earlier. 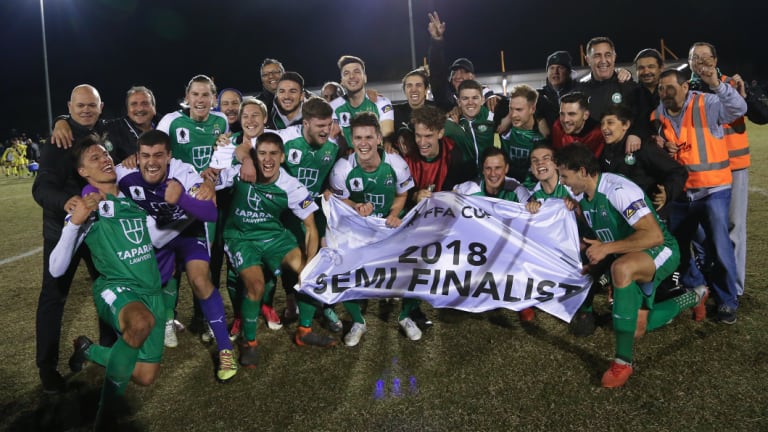 His team had been coasting to a 3-1 victory over Avondale with just five minutes remaining when the unthinkable happened.

Bentleigh conceded two own goals and a last-minute winner to a free kick and somehow had lost. Avondale went on to last weekend's NPL Victoria grand final (where they lost to Heidelberg) and Bentleigh had to kick their heels and wait 12 more days for their FFA Cup semi-final, coincidentally against Heidelberg.

On Wednesday night the wheel turned full circle and just 12 days later Anastasiadis experienced one of the highs of his career as he led Bentleigh to the FFA Cup semi-finals, where they will meet Adelaide United.

The team from Melbourne's south-east have become the first NPL side to make two FFA Cup semi-finals.

The game will be held on Friday, October 5, which is just as well as the part-timers, whose regular season finished with that Avondale defeat, have all booked an end-of-season trip to Bali, leaving the next day.

Anastasiadis jokes that if they make the FFA Cup final (due late in October) he is happy for them to have a week's break and let their hair down – as long as they come back in reasonable shape and ready for a fortnight's hard training.

''It's a real roller coaster, football, isn't it,'' he said on Thursday morning.

''That game against Avondale was one of the lowest moments of my whole career. We have seen teams pull off miraculous wins before, but nothing like that. We gave them two own goals and then that last-minute winner…''

That disappointment was at least partially atoned for on Wednesday night thanks to an 87th-minute Jacob Alexander goal, the only score of the game.

''They like to leave it late don't they,'' said Anastasiadis. ''They made me wait for it. Credit to them for their character. They were all very low after that loss too, but I said to them the great thing about football is that there is always another game soon after for you to make amends.

''They showed a lot of determination and character to put that loss to Avondale behind them and to have the mental strength to take on the NPL champions in a game with such a lot at stake so soon after.

''The good thing is that there is only nine days or so to the semi-final. The boys can have a week in Bali and let off steam – but if we make the final the big issue will be getting games to prepare. The A-League clubs will be in their season, and the NPL sides will have packed up for the off-season.''